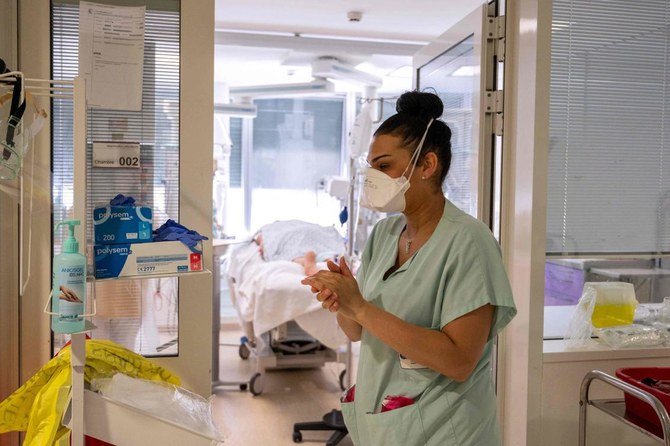 Paris is going through a third wave of the coronavirus pandemic which risks putting even more strain on saturated hospitals. (AFP)
04 Apr 2021

In the COVID-19 intensive care unit of the Antony Private Hospital south of Paris, no bed stays free for long and medics wonder when their workload will finally peak.

As one recovered elderly patient is being wheeled out of the ward, smiling weakly, boss Jean-Pierre Deyme is on the phone arranging the next arrival and calling out instructions to staff.

Louisa Pinto, a nurse of nearly 20 years’ experience, gestures to the vacated room where a cleaner is already at work, scrubbing down the mattress for the next arrival.

“The bed won’t even have time to cool down,” she says as the patient monitoring system beeps constantly in the background.

For now, everything is stable in the 20-odd beds around her where COVID-19 victims lie inanimate, in a silent battle with the virus.

Paris is going through a third wave of the pandemic which risks putting even more strain on saturated hospitals than the first wave in March and April last year.

“With what’s coming in April, it’s going to be very complicated,” says Pinto, a mother of three who hasn’t had a holiday since last summer and like other staff will be canceling a planned break this month.

Even with a new round of restrictions coming into force this week, Health Minister Olivier Veran predicts that infections in France will peak only in mid April, while hospital admissions will continue climbing until the end of the month.

Alarming forecasts leaked to the French media from the Paris public hospital authority AP-HP last week showed anywhere from 2,800-4,400 people in intensive care in the Paris region by the end of April even with a strict lockdown.

The director of the Antony hospital, Denis Chandesris, says intensive care capacity has already been increased by drastically reducing all surgery except for critical cancer, cardiological and emergency cases.

Hospitals everywhere in the region have taken similar measures, re-deploying beds and creating new wards, but they are reaching their limits.

“The difficulty is not so much beds or material, it’s a question of finding medical and paramedical staff to be able to take in patients,” Chandesris explained.

Last Sunday, a group of emergency care directors in Paris warned in an open letter that the situation was so bad that medics would soon have to start “triage” – selecting patients for care based on their chances of survival.

This prospect horrifies staff – and President Emmanuel Macron has always promised to shield hospitals and avoid the sort of scenes witnessed in Italy last March when patients piled up in corridors.

In a televised speech to the nation on Wednesday night, he promised to increase intensive care capacity nation-wide from 7,665 beds currently to 10,000 – a jump of 30 percent.

“I want to thank medical students, retired people, the army health service and medical reserve volunteers. All of them will be mobilized in a larger way,” he announced.

French people had confidence in their government “to deal effectively with the coronavirus.”

Macron is banking on a limited lockdown over the next month turning the rising tide of cases which have roughly doubled to 40,000 a day compared with their level a month ago.

The sharp acceleration is down to the spread of the more contagious so-called British variant which has become dominant in France.

New measures include nation-wide travel restrictions, which limit people to 10 kilometers (six miles) from their homes, and the closure of schools and non-essential shops.

Only a significant increase in the vaccination campaign – which started sluggishly but is now picking up pace – fills any of the medics at Antony Private Hospital with any hope.

After months of lacking doses, the government is promising a major rollout this month and an increase in the rate of jabbing.

Samir Taik, a taxi driver from Paris, walked out of the Antony hospital last week as the 1,000th COVID-19 patient to have benefited from oxygen therapy in the COVID-19 intensive care unit.

The 43-year-old, who enjoys boxing and sport, is still short of breath and reeling from the trauma of seeing his health deteriorate so fast.

He says he knows three or four people with a similar profile to him who have been hospitalized recently.

“Young people need to know that we’re not talking about 80-year-olds, it’s people who are 30, 40, 45-year-olds and have no health problems. The British variant is not like the old one,” he said.