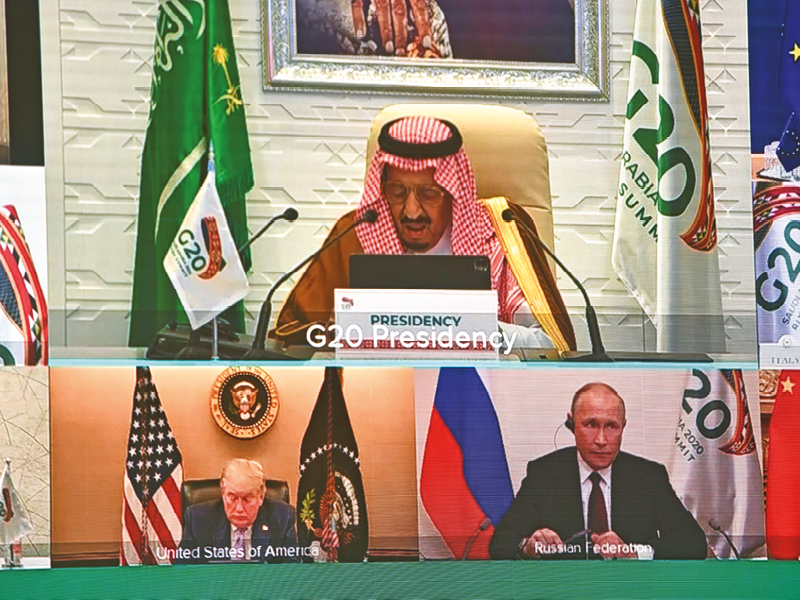 Saudi King Salman opened the G20 summit on Saturday in a first for an Arab nation, with the virtual forum dominated by efforts to tackle the coronavirus crisis and the worst global recession in decades.

G20 leaders, including US President Donald Trump who is refusing to concede a bitter election, popped up in multiple windows across a flickering screen, in a high-stakes webinar held amid the raging pandemic.

The leaders are huddling online for the two-day ‘gathering’ as international efforts intensify for a large-scale rollout of coronavirus vaccines after a breakthrough in trials, and as calls grow for G20 nations to plug a US$4.5bn funding shortfall.

“Although we are optimistic about the progress made in developing vaccines, therapeutics and diagnostics tools for COVID-19, we must work to create the conditions for affordable and equitable access to these tools for all people,” said King Salman, the summit's host.

“We have a duty to rise to the challenge together during this summit and give a strong message of hope and reassurance to our people by adopting policies to mitigate this crisis,” he told world leaders in opening remarks.

With Saudi hopes for a grand coming-out parade dashed due to the pandemic, the event is reduced to brief online sessions of what observers call ‘digital diplomacy’.

Despite having to abandon much of the usual summit pageantry, Saudi Arabia launched the meeting with an aerial acrobatics display over Riyadh.

And denied the opportunity to take the traditional ‘family photo’, a montage of G20 leaders was projected onto the ruins of the historical town of Diriyah during a gala event on Friday.

Along with Chinese President Xi Jinping, German Chancellor Angela Merkel and Russian President Vladimir Putin are among leaders expected to speak at the summit, with climate change among the issues topping the agenda.

Trump is also taking part but it is unclear whether the US president, who continues to reject his election defeat, will make an address. Many G20 leaders have already congratulated his rival, President-elect Joe Biden.