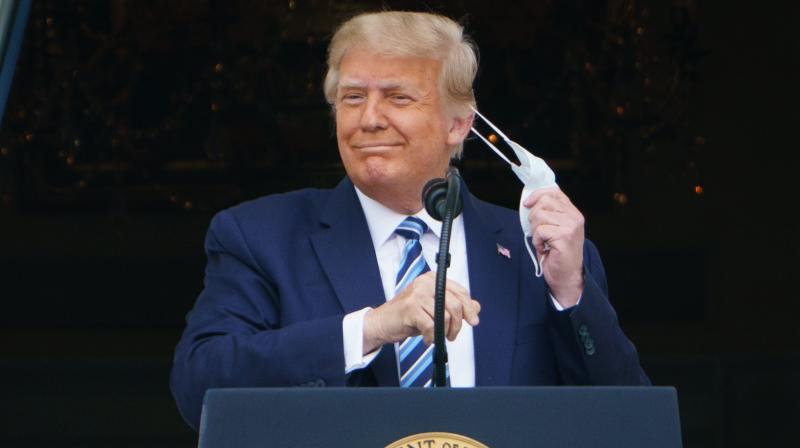 Washington: President Donald Trump rallied hundreds of supporters for a comeback event at the White House, jumping back into the election race nine days after being stopped in his tracks by Covid-19 -- a disease his doctor says he is no longer at risk of spreading.

"I am feeling great!" Trump declared as he stepped out to a White House balcony Saturday -- tugging off his mask to address the crowd, most of them masked under their red "Make America Great Again" hats, but with little social distancing.

"Get out and vote -- and I love you," Trump told supporters, who chanted "USA" and "Four more years" throughout the address lasting just under 20 minutes.

Badly trailing his 77-year-old Democratic rival Joe Biden in the polls less than four weeks from election day, Trump has been counting the days until he can hit the trail again.

The White House doctor announced late Saturday the president was "no longer considered a transmission risk."

Tests showed there was "no longer evidence of actively replicating virus" and that Trump's viral load was "decreasing," Sean Conley said -- though he did not state that the president was virus-free.

Guidelines from the Centers for Disease Control and Prevention say that, for mild or moderate Covid-19 cases, isolation and precautions can be discontinued 10 days after symptom onset, and once patients have been fever-free for 24 hours. However, the severity of Trump's illness has not been confirmed.

Biden has slammed as "reckless" Trump's determination to rally huge crowds during the pandemic -- but the president has brushed the concerns aside, insisting America has the upper hand against the virus despite a death toll of 213,000 and rising.

"I want you to know our nation is going to defeat this terrible China virus," Trump said.

"It's going to disappear. It is disappearing."

"We are producing powerful therapies and drugs, and we are healing the sick and we are going to recover, and the vaccine is coming out very quickly, in record time as you know."

While Trump, 74, has declared himself recovered -- and appeared smiling and energetic at the White House -- doubts linger over his health, with the president's doctor accused of a lack of transparency with the public.

Trump's biggest liability -- overwhelming public dissatisfaction over his handling of the pandemic -- has returned as the headline issue of the campaign thanks to his own infection, with cases again on the rise nationwide.

The seven-day average of new daily cases recorded between October 3 and 9 -- 47,184 -- was the highest since the week of August 13 to 19, according to an AFP analysis of data from Johns Hopkins University.

"Over 213,000 Americans have died from this virus -- and the hard truth is it didn't have to happen this way," Biden tweeted Saturday.

For months, taking their cue from a president who mostly shunned and at times mocked the wearing of masks, White House advisors were rarely seen masked inside the West Wing.

Since Trump and his wife Melania tested positive, the mood has shifted and mask-wearing was compulsory at Saturday's event.

A similar gathering two weeks ago, to announce the nomination of conservative judge Amy Coney Barrett to the Supreme Court, has been singled out as a likely source of many of the dozens of positive cases since linked to the White House.

Biden, vice-president under Barack Obama, is currently close to 10 points ahead in national polls with a solid lead in key battlegrounds.

And in the Republican camp, there is increasingly palpable concern about the state of the race.

"If on Election Day people are angry and they've given up hope and they're depressed... I think it could be a terrible election," Senator Ted Cruz warned this week.

"I think we could lose the White House and both houses of Congress, that it could be a bloodbath of Watergate proportions."

But speaking at Saturday's rally, Trump cited "great polls all over the place", mentioning Florida and Nevada among other states, without elaborating on the details.

"This is the single most important election in the history of our country," he said, before telling the crowd to "get out and vote."