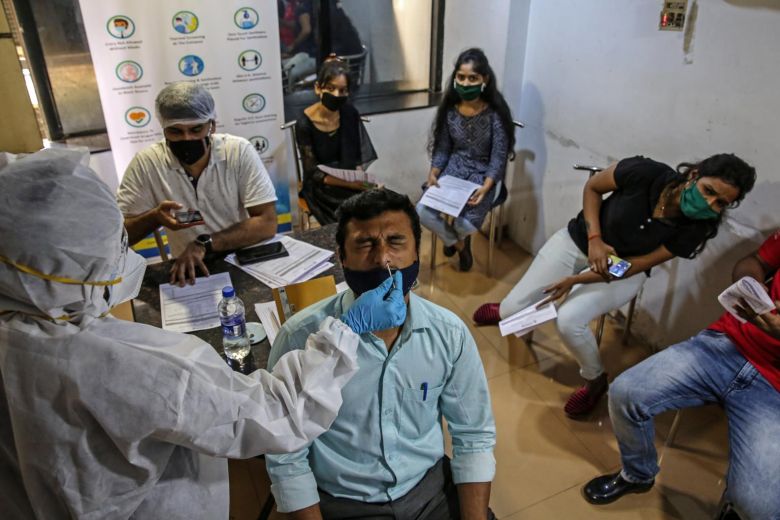 New Delhi: India's coronavirus cases surged past seven million on Sunday as US President Donald Trump got back on the campaign trail just nine days after announcing he had contracted Covid-19.

Governments across the globe are struggling to keep up with a sharp rise in infections and manage growing public frustration over new restrictions as the pandemic enters a second deadly wave.

Since it emerged in China late last year, it has killed more than one million worldwide, infected nearly 37 million and forced millions more out of work as the pandemic batters the global economy.

Indian health ministry data Sunday showed a rise of almost 75,000 cases, taking the total to 7.05 million -- second only to the US which has recorded 7.67 million infections.

But experts say the true number may be much higher, with testing rates in the country of 1.3 billion people -- home to some of the planet's most crowded cities -- much lower than elsewhere in the world.

The new figures come a day after Trump rallied hundreds of supporters at the White House, jumping back on the campaign trail nine days after being stopped in his tracks by a disease his doctor says he is no longer at risk of spreading.

"I am feeling great!" Trump declared as he stepped out to a White House balcony Saturday -- tugging off his mask to address the crowd.

Most of them were masked under their red "Make America Great Again" hats, but with little social distancing.

Trump's doctor issued a statement saying he was fit for a "safe return to public engagement".

His appearance set the stage for a full-fledged campaign rally Monday in Florida -- followed immediately by two more in battleground Pennsylvania Tuesday and Iowa Wednesday ahead of the November 3 election.

In Europe, the virus closed doors early Saturday on the German capital's legendary nightlife, with bars and restaurants ordered shut at 11:00 pm (2100 GMT) in Berlin under a partial curfew announced until October 31.

"This is not the time to party," said Berlin mayor Michael Muller in a message addressed to young people, who are driving new infections higher. "We can and we want to prevent another more severe confinement."

Latin America and the Caribbean marked 10 million cases Saturday and with more than 360,000 deaths, the region is the worst hit in terms of fatalities, according to official figures.

Brazil's virus death toll passed 150,000 people on Saturday, according to health ministry figures, although the rate of new coronavirus infections continues to slow in the South American country.

Authorities in France reported a record 27,000 new infections in a single day Saturday, although numbers in intensive care remained far short of peaks seen in the spring.

Spiralling cases in France have led to fears that the government may need to impose local lockdowns in major cities, which would mimic measures already announced in Spain where the government has prevented people leaving the Madrid region.

Residents can only leave the Spanish capital for work, school or medical reasons as part of restrictions that have been denounced by the city's right-wing authorities.

"We've always placed public health above all other considerations," Prime Minister Pedro Sanchez said during a visit to Portugal.

In Poland, authorities told people to wear face masks in all public spaces after coronavirus cases hit a new record daily high of 4,280.

British Prime Minister Boris Johnson, who himself spent time in hospital for the virus in April, is to outline a new three-tier lockdown system on Monday.

Local leaders bristled at the plans, with Manchester mayor Andy Burnham saying that "we will not surrender our residents to hardship this Christmas or our businesses to failure".

In rare good news, New Zealand and Australia battled to a thrilling 16-16 draw in a gripping Bledisloe Cup Test in Wellington on Sunday that saw the return of international rugby following the coronavirus shutdown.

The entertaining encounter lifted rugby out of its seven-month Test hiatus in front of a near-capacity 31,000 mask-free spectators, with New Zealand having largely contained the virus.