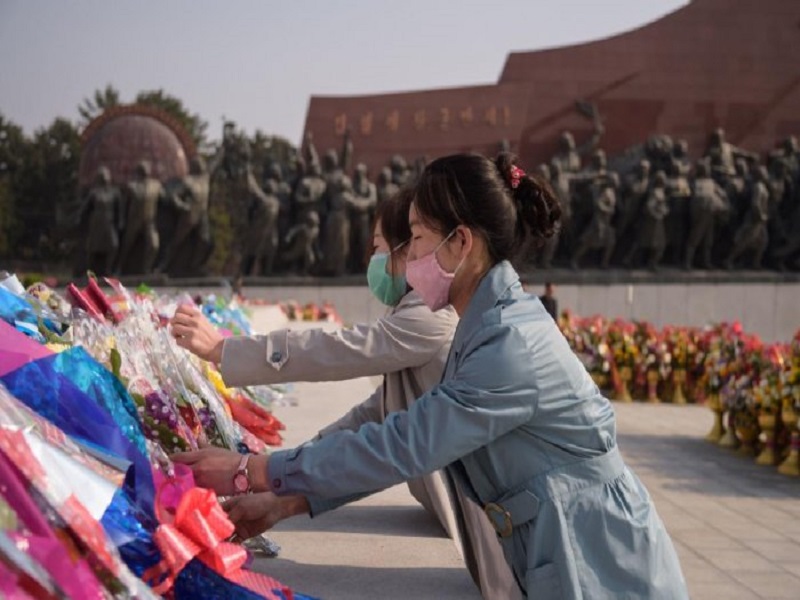 Low-key celebrations for North Korea's founder in face of virus

Seoul, South Korea - North Korea marked the anniversary of the birth of its founder Kim Il Sung in subdued fashion Wednesday, with mask-wearing citizens placing flowers before his statue in Pyongyang as the country imposes strict anti-coronavirus measures.

The grandfather of the current leader Kim Jong Un was born 108 years ago and April 15 is the most important date in the North's annual political calendar, where it is known as the Day of the Sun.

But Pyongyang has imposed tight restrictions against the pandemic that has swept the world since emerging in neighbouring China, closing its borders and for a time quarantining thousands of its own citizens as well as hundreds of foreigners, and insists that it has not seen a single case.

Pyongyang residents arrived at Mansu hill, where giant bronze statues of Kim and his son and successor Kim Jong Il gaze out over the capital, to lay flowers at their base.

But they came in much smaller groups than the sometimes hundreds-strong detachments of workers or soldiers seen on previous occasions.

"The great president Kim Il Sung will be with us forever," read a floral frieze in front of the effigies.

In normal times hundreds of baskets would stand in front of the statues by mid-morning, with a thick layer of flowers placed at their base, but far fewer were to be seen at the same time Wednesday.

At times the festivities can be held on a grand scale, including military parades in 2012 and 2017, when the nuclear-armed North shows off its arsenal to the world.

On Tuesday Seoul said Pyongyang had fired several cruise missiles towards the sea, in what analysts saw as a demonstration of the breadth of its arsenal.

But unusually state media carried no reports about the launch Wednesday.

This year the North has cancelled several elements of the annual commemorations, including the Pyongyang Marathon, normally its biggest tourist money-spinner of the year.

State media have also made no mention of the Kimilsungia festival, an exhibition of the purple orchid named after Kim, who died in 1994 but is still officially considered the country's Eternal President.