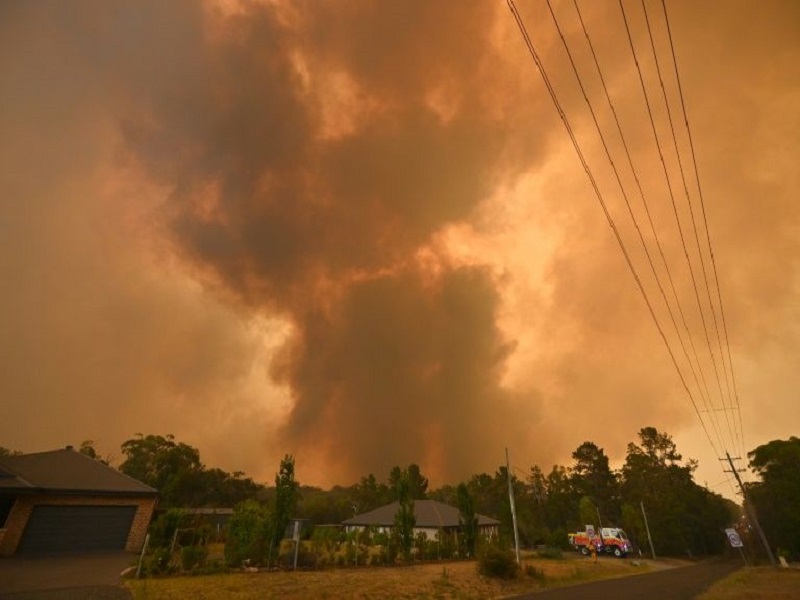 Morrison toured the headquarters of the New South Wales Rural Fire Service -- whose exhausted volunteers have been struggling to contain deadly, out-of-control-blazes for months on end -- where he admitted he had erred in travelling overseas.

Morrison had departed for a family holiday amid record bushfires that have destroyed an area the size of Belgium and cloaked major cities from Brisbane to Sydney to Canberra to Melbourne in choking toxic fumes.

"I get it that people would have been upset to know that I was holidaying with my family while their families were under great stress," he said.

"If you had your time over again and the benefit of hindsight we would have made different decisions."

News of his holiday prompted street protests and widespread criticism on social media, with Australians deploying the hashtag #WhereTheBloodyHellAreYa?

"I apologise," he said. "There have been lessons learned this week," adding that he believed it was time to move on from the controversy.

"I'm sure Australians are fair-minded and understand that when you make a promise to your kids, you try and keep it," the conservative leader said by way of explanation.

The embattled prime minister again acknowledged some link between climate change and weather patterns that scientists say has fuelled the fire crisis, but he indicated there would be no change in pro-coal policies.

Australia's firefighting force is overwhelmingly made up of volunteers who have been strained by the intensity and the length of this year's fire season.

Conditions eased markedly on Sunday, giving them time to try to contain massive blazes near Sydney that are only likely to be extinguished with heavy rainfall.

Large scale back-burning is planned over the next few days before conditions are expected to worsen again in a week's time.

Rain is expected in some fire-hit areas of New South Wales on Tuesday and Wednesday, a welcome Christmas gift for many.

But firefighters are still measuring the toll of Saturday's destruction.

"The devastation is shocking," said New South Wales premier Gladys Berejiklian. "We have got the devastating news that there's not much left in the town of Balmoral."

The state of South Australia has also been hit hard. Two people died in fires there over the past two days, and dozens of firefighters and residents have been treated for injuries and smoke inhalation.

State premier Steven Marshall said that 72 homes had been destroyed in the Adelaide Hills alone, according to public broadcaster ABC.

Officials said two fires -- already big enough to create their own thunderstorms -- had joined to form another "megafire" to the southwest of Sydney.

A fire-generated thunderstorm can occur when a smoke plume is cooled as it meets pressure in the atmosphere, creating a cloud capable of producing its own lightning and powerful winds.

The fires have torched at least three million hectares (7.4 million acres) of land with at least 10 people killed and more than 800 homes destroyed.

Leading doctors have warned of a public health emergency given the unprecedented toxic smoke choking Sydney, which again became a dense haze on Saturday.

"It is pretty much the whole New South Wales population being exposed to prolonged smoke and because we have never experienced this before, we don't know what the eventual outcome will be," doctor Kim Loo told AFP.

"It probably won't be obvious for months, or even years," added Loo, who is also a member of advocacy group Doctors for the Environment.