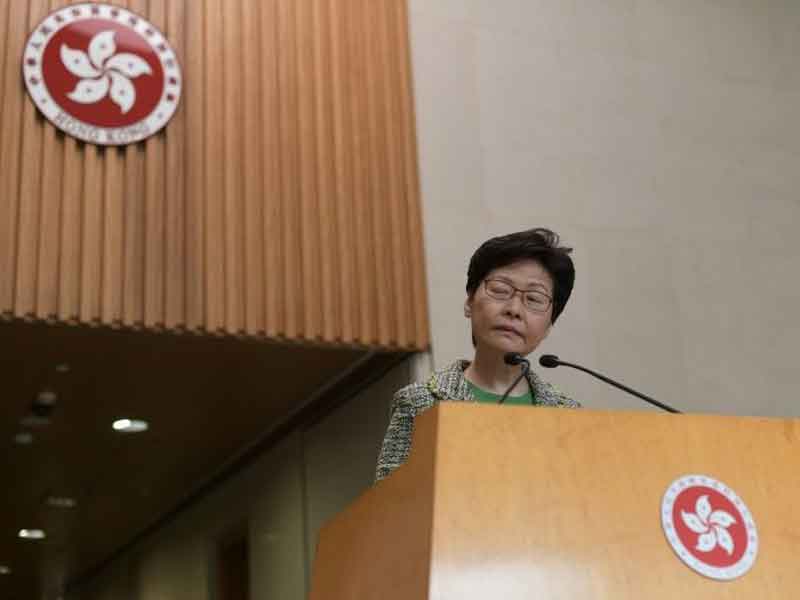 In China's state-run media, protests that have rocked Hong Kong for almost six months are the work of bloodthirsty "barbarians" or "terrorists" backed by foreign forces.

Coverage of the unrest in China, where the Communist Party strictly controls the narrative of all issues it deems sensitive, is in stark contrast to that seen in the West.

Western media trypically reports on protesters' demands for the right to free elections in Hong Kong, as well as an independent inquiry into what they see as excessive police violence.

These issues are rarely touched on in China's media. Here is a glimpse at the Chinese coverage:

"The cruelty and insanity being displayed by the rioters show they have become deranged by bloodlust," the English-language China Daily declared last week.

While the protesters say they are fighting for democratic rights, Chinese media flips that premise.

"The violence in Hong Kong has grown to become a manifestation of the extreme right against democracy, freedom and human rights," said the People's Daily, the main propaganda arm of the Communist Party.

The propaganda of Beijing insists that protesters are manipulated by the West.

The supposed goal of this "black hand" is to trigger a "colour revolution" in Hong Kong -- such as those that have shaken the Arab world since 2011 -- and split the territory from the rest of China again.

The media insists on referencing the cases of Libya and Syria to demonstrate that these revolutions degenerate into civil wars -- a contrast with the stability of China's authoritarian system.

This week the China Daily accused protesters of turning university campuses into "a Syria-like battlefield".

Chinese media has largely failed to cover the grievances expressed by hundreds of thousands of people at peaceful demonstrators.

Those have centred around fears that China is eroding Hong Kong's unique freedoms that were enshrined in law when the city was returned from British to Chinese rule in 1997.

Chinese media has instead focused on the most radical violence, including a masked person setting fire to a man during an argument.

While ignoring huge and peaceful marches by the pro-democracy protesters, Chinese media typically focuses on the much smaller demonstrations supporting Beijing.

In June, after a giant demonstration had gathered two million people, according to the organisers, the China Daily reported the gathering of 100 people in front of the United States consulate to protest Washington's alleged support for the protesters.

While ignoring the complaints of the protesters, national television gives space to Hong Kong citizens who complain of inconvenience in their daily lives.

The demonstrators "block the streets, the vehicles cannot circulate. Today, I took the subway and I took more than one hour to do two stations".

"We hope that the government will end the violence, that life will resume, safely and peacefully," said another resident.

Through the media, the goal of the Communist Party is to warn its own population against emulating Hong Kong protesters, said a China expert Michel Bonnin of the School of Advanced Studies in the Social Sciences in Paris.

"The main concern of the Chinese government was to avoid a possible contagion -- it hid the situation as long as it could, then when it was no longer possible, it demonised the movement, seeing them only as separatist rioters manipulated by foreign hostile forces," he told AFP.

For the Global Times, deadly force may be necessary to deal with the unrest.

"Attacking and threatening the police in the process of law enforcement should face all kinds of legal risks, including being shot dead on the spot," the newspaper said.

"The place where rioters wreak havoc is a short drive from the nearest station of the Shenzhen Armed Police Force, and even closer to the People's Liberation Army in Hong Kong," the Global Times noted.

It also often references the Chinese army's garrison in Hong Kong, which can intervene in the territory's affairs at the request of the local government.

Under the influence of nationalist propaganda, the Chinese population "will be satisfied in case of direct repression by the Chinese army", Bonnin said.