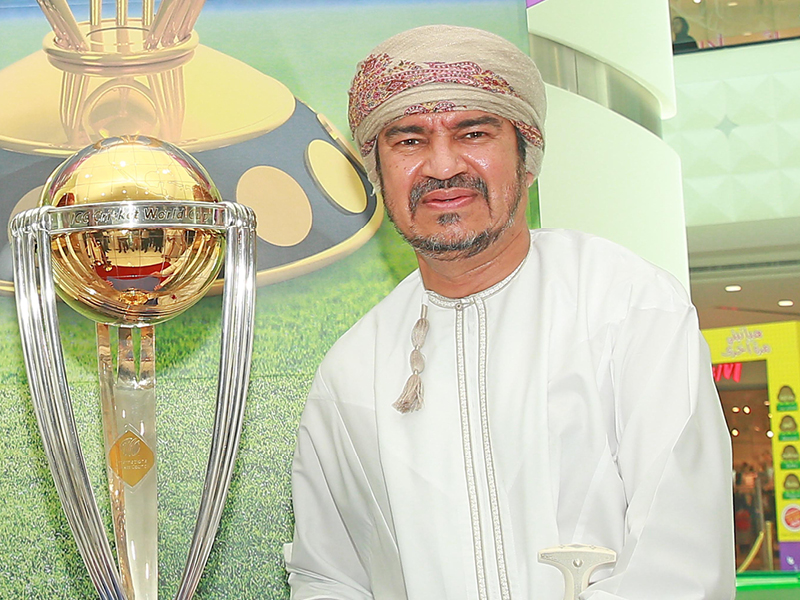 His mobile phone rings endlessly. Suggestions and instructions are delivered on the phone throughout the day. One meeting follows another and he hardly breaks a sweat despite the searing summer heat in Muscat. Amid all the meetings and hectic calls, there is glint in his eyes and smile on his face at the mention of the ICC Men's T20 World Cup Qualifiers being awarded to Oman.

And why not! Being chairman of Oman Cricket (OC), Pankaj Khimji has been the force behind the success of the game in the sultanate and has played a pivotal role in the latest

Bradmanesque achievement of the OC. Hosting the T20 World Cup Qualifiers, which are scheduled to start on October 17, by an Associate nation along with fellow Associate, UAE, is expected to catapult Oman into a different orbit of cricketing destinations and Pankaj seems determined to make the most of it.

In a wide-ranging interview with Muscat Daily, Pankaj spoke of the joy of T20 World Cup coming to Oman and revealed that a top Test-playing nation is likely to come to Oman for a preparatory camp ahead of the T20 World Cup.

“We want Oman to become a top cricketing destination. That is our long-term ambition and we are now on the right path to achieve it,” he said.

While the recent developments of cricket in Oman has been encouraging to say the least, the strong support the game has received from His Majesty Sultan Haitham bin Tarik, who has been OC's patron-in-chief, and the previous OC chairman and Pankaj's father, the Late Kanak Khimji, laid the 'foundation of where we have reached today'.

The idea and how it materialised

According to Pankaj, it was not too long back when the thought of hosting a 'TV tournament' came to his mind. “We have been hosting T20Is and even ODIs as part of the World Cricket League over the past couple of years. But it was the Oman Cricket Academy Ground accreditation as a Test venue by the ICC this January that changed my thinking,” said Pankaj.

“I decided that it was time to go big. When the next IPL [Indian Premier League]  was going to be played in the region, I would try to get four-five games to Oman.

“The idea was to get a live TV telecast international game to Oman. Unfortunately, the proposed Zimbabwe- Afghanistan Test did not materialise and I started to plan ahead. However, in June when International Cricket Council (ICC) officials met and there was talk of a possible switch from India, the original 2021 T20 World Cup host, that I saw an opening for us.

“With my election as vice-president of Asian Cricket Council (ACC) and Board of Control for Cricket in India (BCCI) secretary Jay Shah as ACC chairman, we started getting along well.

“We share the same roots from Gujarat in India and it definitely worked. So when BCCI was planning to shift the T20 World Cup to the UAE, I pitched in Oman as an option for the fourth venue. UAE have three grounds in Sharjah, Dubai and Abu Dhabi but the fourth ground with an ICC accreditation was our venue.

“And here we are. I guess my relationship with the BCCI bosses and the our stars all got together for Oman to stage the event and take us at the next level.”

Pankaj's love for the game began in the early 80s as a student in London. The long drives from Muscat to Sharjah to see the games on the dusty grounds from a hospitality box, bought by his father, were the earliest memories followed by India's historic World Cup triumph in 1983 watched on a TV set despite staying walking distance from Lord's.

“In fact, I met the Indian team a day before the final at St James' Hotel where there was a reception for the players,” recollected Pankaj on his association with World Cup.

He added, “It was my Papa's passion for the game that got me closer to him and the game in the 80s. But it was only in 1999 that I watched a World Cup game on the ground with my family. It was the famous World Cup semifinal between Australia and South Africa at Birmingham. Since that World Cup game, there has been no looking back.

“The proximity of my father to former BCCI chiefs Raj Singh Dungarpur and NKP Salve was another big reason for me to get into cricket administration. I was inspired by those stalwarts and Oman owe a lot to Raj Singh as he was key to us getting ICC and ACC affiliation in 2000.”

Pankaj said, “All through the early years of Oman Cricket, His Majesty Sultan Haitham bin Tarik gave us the needed support. I was with him at Lord's to watch the historic win of India against England in the NatWest Trophy final in July 2002.

“After watching the thriller, I remember him saying that cricket needs to grow in Oman.”

It was in 2004, when Dr Ali bin Masoud al Sunaidy took over as Minister of Sports Affairs that he announced that Oman Cricket will get government recognition. “It paved the way for the land to be allotted where the Oman Cricket Academy Ground is today. We are forever indebted to His Majesty the Sultan and  Dr Sunaidy for the allotment that has brought us so far.

The Oman Cricket Academy was inaugurated in November, 2018, by OC's patron-in-chief and the then Minister of Heritage and Culture. “His Majesty the Sultan has been involved with the game for long and there have been a few memorable occasions when we have watched games together at Lord's in London, including the 2019 World Cup final from the Royal Box.”

Looking ahead with high hopes

“We are delighted to host the T20 World Cup but we are looking ahead. The aim is to make Oman one of the sought-after cricketing destinations for the top teams,” said Pankaj. “We would like to position ourselves as one of the destinations for the developed nations [Test-playing sides] in the future. Hosting the T20 World Cup Qualifiers has set the ball rolling for us.

“As for the various upgrades needed for the T20 World Cup, we have already handed over the orders for the necessary work – upgrade of floodlights, dressing rooms, electronic scoreboards, temporary seating arrangements and hospitality boxes.”

Pankaj said he isn't in favour of a permanent stadium at the existing facility and would be happier with temporary seating arrangements for spectators between 3,000-5,000. “With the Al Hajar mountains in the backdrop behind the Oman Cricket Academy Ground, we could also opt for grass mounds in the future at Amerat, a typical cricket ground more suited to families sitting together.”

Oman to be shown to the world

The biggest benefit of the T20 World Cup Qualifiers, Pankaj believes will be the massive coverage of the event with live telecast and virtual platforms reaching an audience upwards of 3.5bn people across the world.

“What’s most important of all that is Oman is shown to the world, not just Oman Cricket. We are already in close talks with the Ministry of Heritage and Tourism to showcase Oman through the cricket coverage during the T20 World Cup Qualifiers. We already have a lot of interest from media persons from the Indian subcontinent,” he said.

Pankaj said that the success of the national team since 2005 when Oman managed to reach a World Cup Qualifier for the first time – despite having no grass pitch or ground – is a true reflection of the board's commitment towards the game.

“My father always believed that one has to prove on the pitch and his concern for the wellbeing of the players and the team was something I learnt a lot from over the years,” said Pankaj.

For his dedication and love for the game, the Late Kanak Khimji was presented with a Lifetime Service award by the ICC in 2011.

Things changed dramatically when Oman's first grass pitch and ground at Amerat came up in 2012. Since then, the national team has been on an upswing with coach Duleep Mendis joining in 2013.

“Qualification to the T20 World Cup in 2016 in India was another big turning point and our stunning win over Ireland at Dharamshala in the Qualifiers brought lot of attention.”

Pankaj said, “I remember Papa [Kanak Khimji] wanted to be in the dugout at the ground in Dharamshala. However, officials said that non-playing team officials can't be in the team dugout.

“It was a big dilemma for me as I knew he was so passionate. But I was the mentor and team official and he gave me the badge to stay. It was then I realised that he is handing over the baton to me to run OC and the team. He then was more of a guardian and guide to us, always pushing me to take the lead till he passed away. In fact, we had made all plans for the T20 World Cup in Australia before it was cancelled last year.”

As for the number of games of the Qualifiers yet to be finalised, Pankaj said, “I am hopeful that we will get a few more games. Six are confirmed as one group is to play here. We will be seeking more games from the ICC and BCCI when they arrive here. They will inspect the venue and go through the details. Once we’ve all sat down, we’ll know if we have six games, eight, 12 or whatever it is.”

Being a host country and also playing the T20 World Cup is what stands out for Oman and this honour is unique and rare. “We are the only Associate nation to host and play a T20 World Cup. This is the biggest achievement in itself and we are now going to make sure that the World Cup is hosted in such a grand manner that Oman becomes a much sought cricketing destination for teams across the world. We will make that happen,” he said as he signed off.