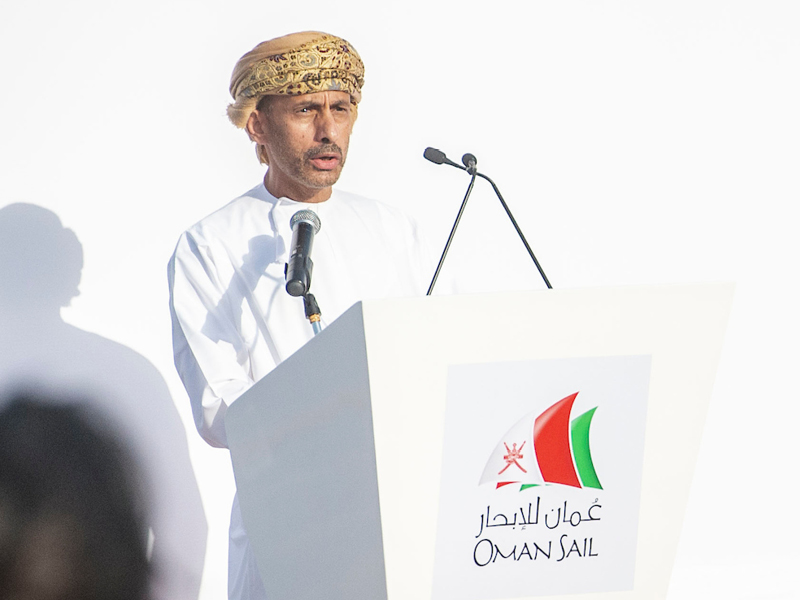 Having completed one year as the Oman Sail CEO, Dr Khamis al Jabri believes that the organisation has a major role to play to enhance Oman’s reputation as a top sailing venue

Overlooking the beautiful Al Mouj Marina his office window opens up to the sea. Clear blue waters with a view to watch boats sailing in distance is a joy for a seaman.

For Dr Khamis al Jabri, the sea has been part and parcel of his journey from his school days.

A naval officer, who holds a doctorate in defence studies, Jabri recently marked his first anniversary as the CEO of Oman Sail.

And switching responsibilities from a senior defence official to a chief executive would have been a challenge for most but with the sea serving as a common link, Jabri seemed to have taken his new role just like a duck to the water.

The ongoing coronavirus pandemic did not make things easier for him and with sports activities suffering for most part of the year, it was a task in hand for Jabri as he took over the reigns from his predecessor David Graham in April.

Graham, who served Oman Sail for 11 years, is presently the CEO of World Sailing, the world governing body of sailing.

For Jabri, management roles are not new as he served as director-general of operations and plans for the Royal Navy of Oman for nearly three years.

His past experiences to accomplish challenges under tight deadlines came to the fore recently when Oman was lauded globally in the sailing world for successfully hosting the Asia and Africa Olympic Qualifier at the Mussanah Sports City last month.

The success of the Mussanah Open Championship 2021, which served as the Asia and Africa Olympic Qualifier in five classes – Laser, Laser Radial, 49er, 49erFX, RS:X (men and women) - was a feather in the cap of Oman Sail.

The championship turned out to be bitter-sweet for the hosts, with the organisation and safe hosting of the event being praised but Oman's hope for an Olympic berth for the first time dashed narrowly.

Jabri was 'immensely proud of' the hosting and basked in the glory of plaudits from sailing officials, sailors and delegates from 16 countries and Asian

In an exclusive interview to Muscat Daily, Jabri said, “We have a mission to  make Oman as one of the top sailing destinations in the world. We have achieved to a large extent but we will continue to make efforts to put Oman prominently on the world map.

“We were certainly disappointed that our boys – Waleed al Kindi and Musab al Hadi – could not secure a berth for the Tokyo Olympics in the 49er class despite their brave attempts. But they kept fighting till the end and stood with the Oman flag on the podium, which was a proud moment [the Omani pair came third].

“We were offered to host the Olympic Qualifier at the last moment and it was a real test of our organisational skills and my team. I am delighted that my team along with various other stakeholders came out with flying colours. The event's success underlines our reputation as one of the top sailing destinations. We have earned this over the years and we would like to make it better and better in the times to come.”

Oman has a old maritime history and Jabri reiterated that 'one of the key objectives of Oman Sail is to rekindle the maritime eminence through not just participation in international regattas but also diversify and capitalise on its organisational skills'.

Jabri said, “We have worked hard over the years [Oman Sail was founded on Late His Majesty Sultan Qaboos bin Said's orders in 2008] and reached a stage where our expertise and skills are widely acknowledged. I proudly look into the window of our past achievements to move ahead.

“I believe that despite the strides made by Oman Sail over the past 11 years, the rewards have not matched our achievements and more needs to be done to highlight our role. We still have a long way to go and we need to leverage the good work done in the past to create a monumental experience.

“We need to build upon our credentials as an organisation that has hosted world-class events and try to help other Omani sports bodies to achieve such ambitious goals.

“We recently advised the Oman Hockey Association in preparing their bid for the FIH World Hockey 5S World Cup. We are hopeful that our inputs would make them a strong contender for the bid. We would like to expand this area of consultancy in the years to come but sailing  activities will be our core,” he added.

The CEO said that the primary aim remains to produce world-class sailors and the four sailing schools are scouting for local talent.

“We have not been able to develop and train Omani sailors in large numbers to compete at the top-level. We have only a few and we are keen to realign our priorities and focus on this mission. Schools will be the area of interest for us and we would like various stakeholders to support us in this regard.

“As for our diversification of Oman Sail activities, we will have a pragmatic and phased approach with primary and core activity being sailing though adventure sports and sports tourism are areas that we would continue to push forward.”

Jabri said Oman Sail is covering ten of the 12 segments of Oman Vision 2040 and felt that success could be achieved if the private sector came on board as partners.

“I believe in the concept of partnership and not sponsorship and that's the way forward for us,” he said.

Jabri thanked BP Oman for joining hands with the Oman Paralympic Committee and Oman Sail in launching the Sail Free programme to introduce people with physical impairment to sailing. The ground-breaking project is one of its kind in the GCC and MENA regions.

The project by Oman Sail was singled out for World Sailing’s President’s Development Award in 2019.

Jabri said that Oman Sail will look to capitalise on its human resources and train more Omanis in sailing and administration.

“The focus will be on a professional approach as we believe in our abilities. Rekindling the sultanate's maritime eminence and participation at regional and global competitions with an aim to win will be the other key objectives ahead.

“We certainly need to have a bigger pool of Omani sailors and start building a new generation of these talent who can fly the flag of our country high,” he said.