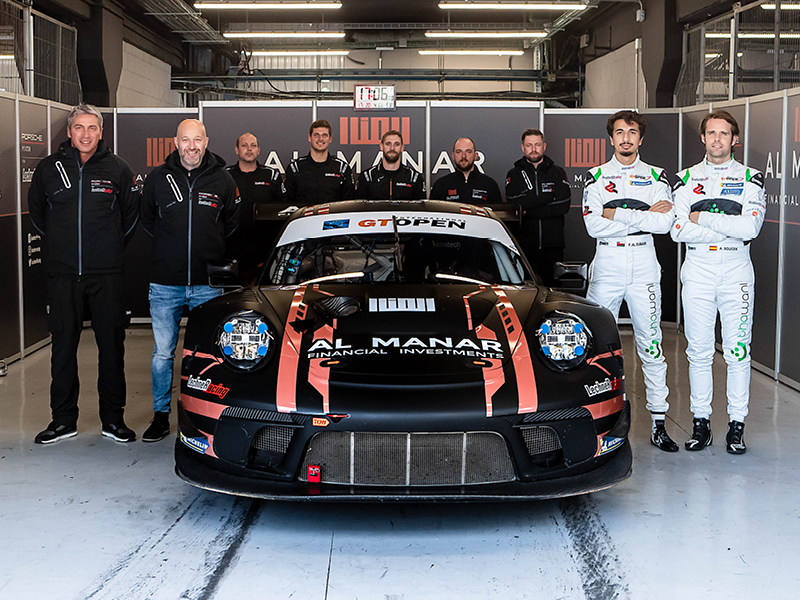 It was a test of skills, speed and concentration, test of a new car, test of teamwork and camaraderie.

And Oman's young motorsports star Al Faisal al Zubair was up for all these tests and passed out with flying colours as he and his partner, Andy Soucek of Spain, came up with impressive times during the joint International GT Open and GT Cup Open Europe Barcelona Winter Test that concluded at Circuit de Barcelona-Catalunya on Tuesday.

Despite the fresh challenges posed by getting behind the wheel of an all-new and powerful Porsche GT3 R car and working with a new back-up team, Lechner Racing's Al Faisal triumphed and ended his maiden Test for the GT Open series on a happy and a satisfying note.

Aged 22, Al Faisal sounded optimistic and hopeful of a good season ahead as he gets ready for his debut in the highly-competitive endurance racing series next month.

Al Faisal and Soucek will launch their season next month at Paul Ricard circuit in France and the Omani racer was delighted that things went as per his plans at the Winter Test.

A total of 17 teams turned up  for the Winter Test and a total of eight sessions were held over the two days.

Al Faisal and Soucek ended up among the top-five on the opening day, sending strong signals to their rivals and they continued with their impressive results on the second day as they finished as high as

runner-up in one session and a third spot in another.

The teams experienced varied weather conditions on both days as they were welcomed by sunny skies on the opening day while skies were overcast and some rain appeared for a while, during the third of the five sessions held on Tuesday.

Speaking from Barcelona, Al Faisal said, “I am very happy and satisfied with my stint in the new GT3 R car. This is the first time I have raced in this car and I thoroughly enjoyed it.

“I and Andy were glad with the car's make-up and settings. The team, too, was satisfied with our performances. Overall, it was a fruitful outing and I now look forward to the Paul Ricard opener next month.”

The two-time former Porsche GT3 Cup Challenge Middle East champion added, “We improved with each session and our times were competitive. We were in the top bracket and the results give us the confidence that we will be able to achieve good results ahead.

“I pushed the car hard and I was at ease with it. We have the speed and skill sets and with Andy we are a good package. We will definitely provide a stiff challenge to the contenders.”

Al Faisal, who is fully backed by Oman-based Al Manar Financial Investments, and Soucek will be competing in the Pro class at the GT Open.

Al Faisal said that his ‘experience in racing in Porsche Cup Challenge cars’ helped him a lot while driving the new GT3 R car. “I was able to get a better grip and balance of the car during the test session as I had driven the Cup cars in the past.

“The GT3 R car has a lot of power and a lot of aero. It is a lot better on brakes. Teaming up with Soucek was great as he brings in a lot of experience. Our confidence and morale is high as we look forward to the racing season,” added Al Faisal.

On the first day of intense testing, Beretta-Schandorff (VSR Lambo) posted the best time (1.45.475) after topping sessions one and three on the slightly-modified Catalan track after the changes to turn ten.

Only 31 thousandths behind was the AKM Mercedes of Spinelli-Moiseev, fastest in session two, which preceded the Lambo of Cipriani (-0.440), the Lechner Racing Porsche of Al Faisal-Soucek (-0.787) and the new Audi of Balfe-Carroll (-0.829).

Al Faisal and Soucek were placed fourth in combined timings after day one, and on day two, they even managed a top-two (fourth session) and a top-three (third session) in the five sessions held.

AKM Mercedes of Spinelli-Moiseev were top on the second day, too.

The 16th edition of International GT Open will begin at the Paul Ricard circuit in France on May 16. The seven-leg series concludes in Barcelona on October 24.