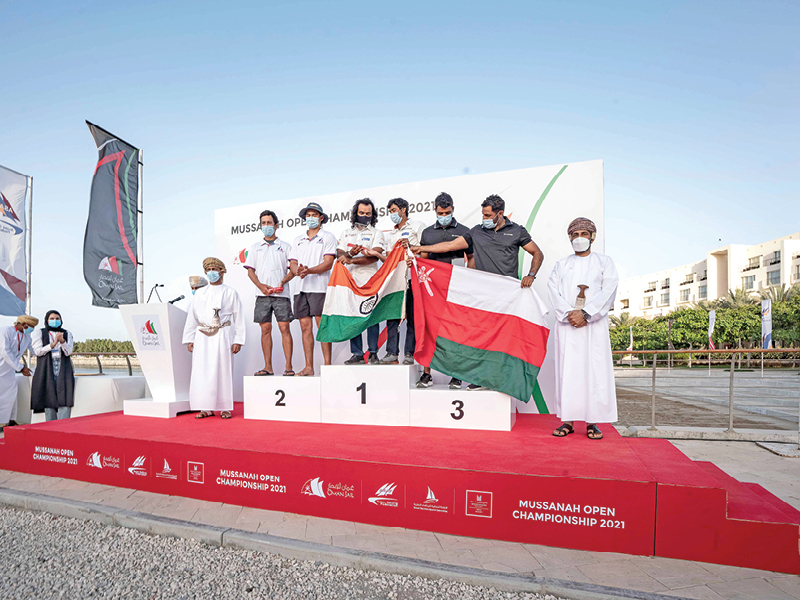 A bronze medal in the 49er class was a little consolation for Oman's Musab al Hadi and Waleed al Kindi, as the pair's dreams of making it to the Tokyo Olympics were dashed on the concluding day of the 2021 Mussanah Open Championship, an Asia and Africa Olympic Qualifier, at the Millennium Resort Mussanah, on Thursday.

Expectedly, the Indian pair of KC Ganapathy and Varun Thakkar, who were consistent on the top for majority of the days in the competition claimed the top honours and a spot in the Tokyo Games.

Hadi and Kindi were left with an improbable task to achieve as they chased a historic maiden spot in Olympics for Oman after they trailed the leaders, Ganapathy-Thakkar, by 26 points on the penultimate day on Wednesday.

With their Olympic hopes virtually over ahead of the final day, they did well to claim a podium finish by finishing third in the double-point medal race on Thursday.

Ganapathy and Thakkar recorded eight points on the final day but that was enough to seal their spotfor Tokyo while Hong Kong's Akira Sakai and Russel Aylsworth came second after winning the medal round.

The final day witnessed Indian team script history as four sailors sealed their spots for Tokyo Olympics. This is the maximum number of sailors qualified from India for a single edition of the Olympics and also the first time that India will compete in three sailing events.

Nethra finished sixth in the medal race on Thursday but still ended at second overall with 30 points to confirm the Olympics spot. Guest sailor and Dutchwoman Emma Savelon (29 points), who finished fourth in the medal race on Thursday, topped the standings but she couldn’t be considered for the Asian qualifying spot. So, Stephanie Norton of Hong Kong, who finished third overall, qualified.

Saravanan was third till the penultimate day on Wednesday but won the medal race on Thursday to jump to second place overall with 53 points. The Indian pipped Thailand’s Keerati Bualong (57 points), who was second till Wednesday.

Singapore’s Ryan Lo Jun Han (31 points) was first overall in the class and made it to Tokyo.

China’s Ye Jin and Chen Shasha sealed victory in the 49er FX class and booked their place for the Games with a narrow win over Molly Highfield and Sandy Wing Chi Choi from Hong Kong. India’s Ekta Yadav and Ritika Dangi ended the tournament in third place.

In the men’s RS:X medal race, Thai windsurfer Natthapong Phonoppharat led from the first to the last day and claimed gold in impressive style to qualify. Yancy Kaibigan from the Philippines claimed silver and fellow Thai surfer Navin Singsart edged out Geylord Coveta of the Philippines by a single point to take the bronze.

The women’s RS:X class saw Amanda Ng Ling Kai of Singapore and Charizanne Napa from the Philippines trade places back and forth. The Singaporean eased to gold and qualified for the Olympics this summer, her second appearance at the Games after representing Singapore at the 2016 Rio Olympics.

Charizanne Napa took the silver and Ishwariya Ganesh of India claimed the bronze.