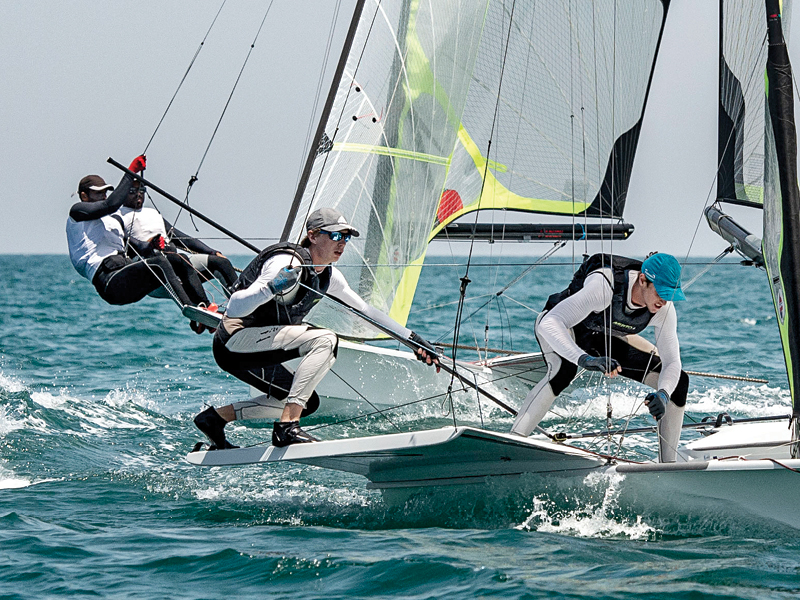 Hadi and Kindi trail by 26 points to class leaders, Ganapathy and Thakkar, with only one medal race remaining

They displayed fighting spirit in abundance but it wasn't enough as Oman's hopes of creating sailing history virtually got over on Wednesday. Over the past five days, the pair of Musab al Hadi and Waleed al Kindi have been attempting to become the first sailors from the sultanate to qualify for the Tokyo Olympic Games at the ongoing 2021 Mussanah Open Championship, an Olympic Qualifier for Asia and Africa, at the Millennium Resort Mussanah.

However, after the conclusion of the final and 15th race in the 49er class on Wednesday and with only the one-off medal race on Thursday remaining, Hadi and Kindi could only retain their overnight fifth spot as they ended the day with 87 nett points. Despite their determined efforts, the duo were left with an improbable task on Thursday to catch the class leaders - KC Ganapathy and Varun Thakkar of India, who were sitting pretty with 61 nett points.

The Indian pair certainly are in the pole position to seal the only spot in the class for the Tokyo Olympics as they lead by 17 points from their nearest rivals, Akira Sakai and Russel Aylsworth of Hong Kong, who struck form on Wednesday with a clean sweep of all the three races held. The hat-trick of wins provided the Hong Kong duo a slim hope to overcome the Indian pair on the final day.

With a single-round double-point medal race to determine the winner on the concluding day of the championship, the Indian pair appears to be the favourite to secure the spot among the ten teams, having been on the top of the leaderboard for the third successive day.

At the third spot is China's Hong Wei and Chao Xiang with 85 nett and South Africa's Benjamin Daniel and Alex Burger are at fourth with 86.

Oman’s Hadi and Kindi began the day on a positive note on Wednesday, securing a podium finish, their sixth in the championship. However, they slid to eighth place in the next to ruin their chances and a sixth place in the final race could only help them retain the fifth place.

With Oman’s Olympic hopes virtually over, a senior Oman Sail official told Muscat Daily on Wednesday, “The dream is over. Both Hadi and Kindi did their best despite the challenges faced during the prepararions caused due to the coronavirus pandemic. We are proud of them. We hope to see them finish among the top-three tomorrow.”

Oman's other pair in the class, Ahmed al Hasani and Abdul Rahman al Mashari did not compete for the second consecutive day to make a tame exit.

In the 49er FX class, there is a close fight between leaders Chen Shasha and Ye Jin of China and Hong Kong's Molly Highfield and Sandy Wing Chi Choi with only three points separating them.

In the Laser Radial and Standard classes, which will send the best two finishers to Tokyo Games, India's Nethra Kumanan is on the verge of qualifying as she leads Radial class with 18 points and is followed by Netherlands' Emma Savelon with 21 and India's Ramya Saravanan at 39.

Singapore's Ryan Lo Jun Huanis on top with 17 points and is certain to make it to the Olympics in Laser Standard class as Thailand's Keerati Bualong and India's Vishnu Saravanan fight for the second spot with 51 points each.

The men's RS:X class has a clear favourite in Thailand's Natthapong Phonoppharat but an exciting tussle is on in the women's RS:X class between Singapore's Amanda Ng Ling Kai and the Philippines' Charizanne Napa with Amanda (15) leading with by three points.