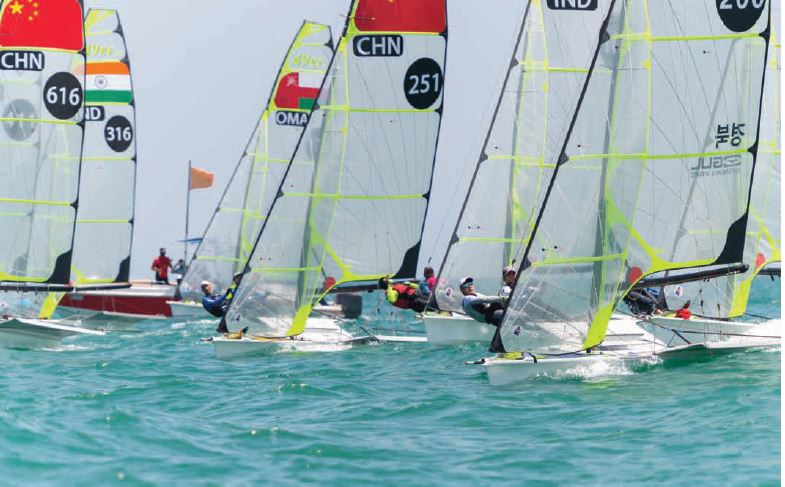 Three days of racing, three different teams at the top. Such is the intense competition in the 49er class at the ongoing 2021 Mussanah Open Championship, an Olympic Qualifier for Asia and Africa, at the Millennium Resort Mussanah.

Oman's Olympic hopefuls, Musab al Hadi and Waleed al Kindi, who were on top of the  49er leaderboard at the start of the day on Monday, failed to repeat their Sunday’s display as they slid from the top to the sixth spot at the end of the day, which also marked the  halfway stage of the competition.

Three more races were held on Monday to complete a total of nine and with Hadi and Kindi failing to claim a single podium finish on Monday, they have a nett score of 43 and trail the leader by 17 points.

If Sunday was Hadi and Kindi’s best show so far in the event, with two first places and one second, the nearest they could achieve on Monday was a fifth. Earlier in the day, the pair recorded a poor 13th after beginning the day with a ninth place finish.

Clear blue skies welcomed the sailors on Monday with winds up to 15 knots blowing throughout the day. The ideal conditions seemed to go down well with India's pair of KC Ganapathy and Varun Thakkar, who hit a purple patch with three podium finishes, including a win in the eighth round and a runner-up spot in the concluding race of the day.

Their display led the Asian Games bronze medallists to the top of the rankings after nine races with a nett score of 26, having been at the third place on the previous two days.

China's Hong Wei and Chao Xiang had claimed first day's honours while Hadi and Kindi sizzled on the second day. With three different leaders on each day, the next three days are expected to produce some thrilling action with the teams battling for the lone spot in the class for the Tokyo Olympics.

South Africa's Benjamin Danile and Alex Burger are placed second (35 nett) while Wei-Xiang are third (36 nett). Thailand’s Don Whitcraft and Dylan Whitcraft are at fourth. Hong Kong's Akira Sakai and Russel Aylsworth are at fifth (43 nett), the same score as the Omani pair, but ahead on the basis of more race wins.

The other Omani team in the class - Ahmed al Hasani and Abdul Rahman al Mashari - are struggling at 13th among the 14 competitors.

In his comments at the end of day’s action, India's Ganapathy, said, “We started off the event a bit shaky, we hadn’t raced for a year and a half coming into this, but my coach and I have been working each day to correct the previous day’s mistakes. So, overall, we are happy with how the event is progressing and we want to stay focused and keep improving each day.”

Elsewhere, in the RS:X men class, Oman's trio of Abdulmajeed al Hadrami, Faisal al Qutaiti and Al Mukhtar al Mujaini, continued with their modest performances, though Hadrami improved from his overnight 11th to ninth spot, while Qutaiti and Mujaini stay at the bottom.

In the women's RS:X class, Charizanne Napa from the Philippines holds a narrow from Singapore’s Amanda Ng Ling Kai and India’s Ishwariya Ganesh.

The top-two in the 49er FX class switched places from Sunday with the team of Molly Highfield and Sandy Wing Chi Choi from Hong Kong taking over at the top from China’s Ye Jin and Chen Shasha.