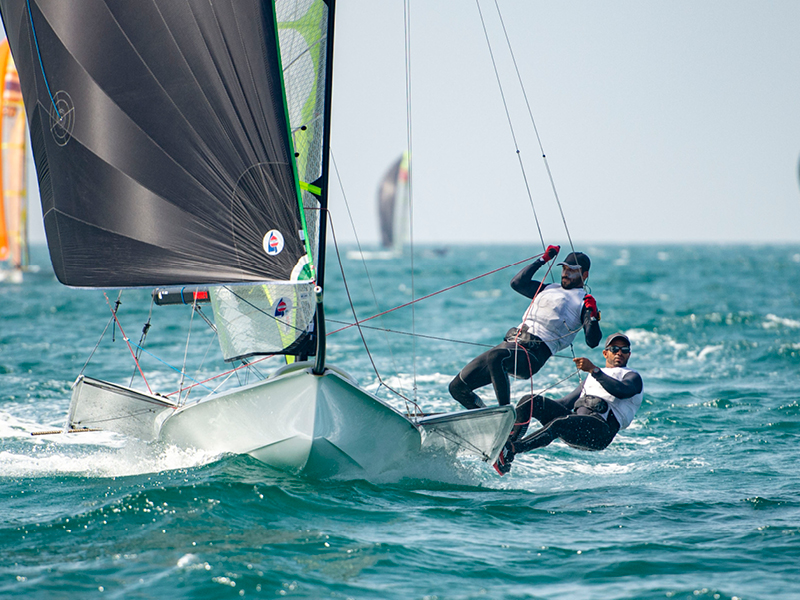 It was a sensational Sunday for Oman's top-ranked pair of Musab al Hadi and Waleed al Kindi in the 49er class at the 2021 Mussanah Open Championship, an Olympic qualifier for Asia and Africa, at the Millennium Resort Mussanah.

A remarkable comeback by the sultanate’s Olympic hopefuls saw the duo erase the disappointment of the opening day as they rose to the top of the rankings on day two in their class after the conclusion of three more races on Sunday, six in total, in good conditions with wind between 15-16 knots throughout the day.

Hadi and Kindi were nearly unstoppable in the three races held on Sunday as they won two and came a close second in the other race to catapult themselves from overnight's tenth spot to the top.

Sunday's performance by Hadi and Kindi raised fresh hopes of Oman sports fraternity as they look forward to their continued excellence over the next four days as they chase history - a maiden Olympic berth for Oman sailors.

It was a display of indomitable spirit and grit from Hadi and Kindi as they bounced back in style. On the opening day, Hadi and Kindi had finished 11th, sixth and eighth respectively in the three races but the duo remained positive.

Despite the hiccups on Saturday, the pair started the new day with a stunner as they won the opening race after overcoming the challenge from Thailand's Don Whitcraft and Dylan Whitcraft.

However, in the next race, Hong Kong's Akira Sakai and Russel Williams Aylsworth, who were 11th in the opener edged past Hadi and Kindi for a win while Whitcraft duo came third.

In the day's final race, Hadi and Kindi bounced back to clinch the top honours to claim the lead ahead of third day’s action.

With one race discarded from the six held so far, Hadi and Kindi have a nett score of 18 from a total of 29 points after two days of racing.

Hashim al Rashdi, Oman 49ers’ team coach, said, “Today was a very good day after a difficult opening day. The performance by Hadi and Kindi puts them back in contention. But these are still early days.”

Speaking after a successful day on his home waters Hadi, the team helmsman, said, “Our goal is to remain competitive until the last second of the last race on the last day. It will be test of mental strength and tough for all teams right to the end. With a lot of

racing still to take place, we must stay calm and safe, on and off the water.”

Overnight pair of Hong Wei and Chai Xiang from China is close second with a nett score of 20. Wei and Xiang had a fifth, 12th and eighth to their credit on Sunday but their day one display kept them ahead of the Indian duo of KC Ganapathy and Varun Thakkar. The Indian team is third, also with nett 20, as they recorded fourth, fifth and a third rank on day two. South Africa's Benjamin Daniel and Alex Burger are fourth with nett 24.

Oman's other pair in fray, Ahmed al Hasani and Abdul Rahman al Mashari, had another disappointing day as they finished sixth, eighth and 11th to be placed overall 12th (nett 43) among the 14 teams.

Though there is a long way to go before the Olympic qualifiers are spotted on Thursday, the way Hadi and Kindi fought back on Sunday has renewed Oman's hopes for maiden Olympic sailing qualification.

Meanwhile, Oman's trio of windsurfers, who were late entrants to the competition, Abdulmajeed al Hadrami, Faisal al Qutaiti and Al Mukhtar al Mujaini, had another disappointing day as they finished in the bottom rung among the 13 participants after three more races on Sunday.

In the women’s competition, Charizanne Napa of the Philippines maintained her excellent form from day one to stay top of the rankings ahead of Amanda Ng Ling Kai from Singapore and Ishwariya Ganesh of India.

The Mussanah Open Championship is also serving as an Olympic qualifier for Laser, Laser Radial and 49erFX classes for men and women.

The 49er FX class saw China’s Ye Jin and Chen Shasha remain in first position with the team of Molly Highfield and Sandy Wing Chi Choi from Hong Kong second and the Thai pair of Kamonchanok Klahan and Nichapa Waiwai at third spot.

Tomasz Januszewski, chief national coach of Indian sailing contingent, said, “Our team is improving day by day, and I am very proud of the sailors. We have prepared well for this event; individually, as a team, and some members were sailing with a larger fleet in Mumbai before coming to Oman.

“We have spent the time between events preparing as best we can and we are showing a good sailing performance so far. We have definitely improved since last year and I am confident that we have not finished showing our ability on the water.”

A total of 102 sailors from 17 countries are participating in different classes in a bid to secure their place at Tokyo Games as the Mussanah Open Championship is the final qualification event.

The regatta was allocated Olympic qualification status by World Sailing to substitute forpostponed events throughout 2020 and allow sailors the opportunity to confirm their spot in a safe and competitive environment.

While the top two finishers each in the two Laser classes – Laser Standard (men) and Laser Radial (women) – will qualify for the Olympic Games, the other four classes will send only the respective overall winners.

So far, 312 athletes from 59 nations have qualified for the Olympic Games sailing events, which are scheduled to be held in Enoshima Yacht Harbour from July 25-August 4.