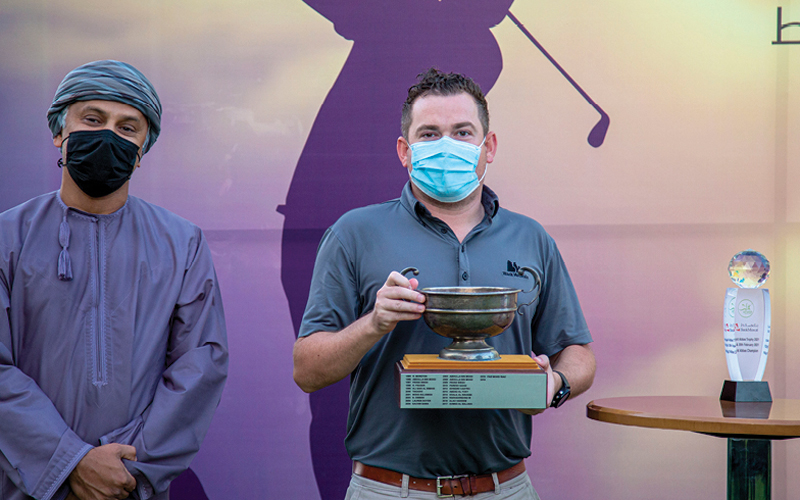 The annual Sayyid Abbas Golf Championship is one of the most popular and prestigious tournaments at the Ghala Golf Club. Held in the memory of former club chairman, Late H H Sayyid Abbas bin Faisal, the tournament has over the years attracted the best domestic amateur golfers in the sultanate leading to an exciting battle for the top honours.

Held since 1979 at the Ghala Golf Club, Sayyid Abbas Trophy is one of the oldest tournaments and the 2021 edition witnessed a large field of 115 golfers.

After two days of competition in good playing conditions, James O'Reilly emerged the winner in the nett category with a score of 140, staving off a formidable challenge from  former champion Faiz Mohammed Riaz, who finished just a stroke behind (141) to claim the runner-up honours.

Both, O'Reilly and Faiz, are regular members at the Ghala Golf Club and their time spent on their home course seemed to have given them the extra edge over the other rivals. Former national team golfer Hussain Dad al Balushi, of Ras al Hamra Golf Club, with a score of 142, was second runner-up.

O'Reilly shot a three under-par 69 on the opening day and then carded one under-par 71 on the next day while Faiz carded a one under-par on Friday and a 70 on the second day.

Faiz's total was enough to give him the gross category title but with each golfer allowed to take home only one award, Rashad al Harthy, who shot 143 (67 and 76), and was second best, took the gross division award.

Speaking after his win in gross division and finishing second in nett, Faiz Mohammed said, “I was not happy with my display in the previous tournament – The Kais Celebration. I was eager to make up for the disappointment and I am happy and relieved that I could perform at a high level amid a stiff competition. It was a tight finish as only one shot separated me and O'Reilly.”

Another golfer who won the hearts of all was young Yusuf bin Azaan al Rumhy, the seven year old son of Oman's No 1 golfer Azaan. The grandson of H E Dr Mohammed al Rumhy, who himself is an avid golfer, Yusuf was making his debut in a 36-hole event and finished an overall creditable 20th with scores of 68 and 81, playing on different tees for juniors.

Azaan said, “It is a special day for me and my family. I am proud to see Yusuf complete his first 36-hole tournament and play so well. I thank my family and all well-wishers for supporting him. He is passionate about the sport and I hope to see him play for Oman and bring laurels for the country.”

Azaan's brother, Hamed al Rumhy, also featured in the tournament and with the third generation player on the golf course, there is no denying that golf runs in the blood of Rumhys.

Thanking Bank Muscat for their support, Faiz Mohammed, Ghala Golf Club board member, said, “We at Ghala Golf Club extend our gratitude and thanks to Bank Muscat for supporting the tournament. We believe that the success of such events and the recognition which the players receive from participation will serve as a source of encouragement to others to participate and expand their golfing skills.”