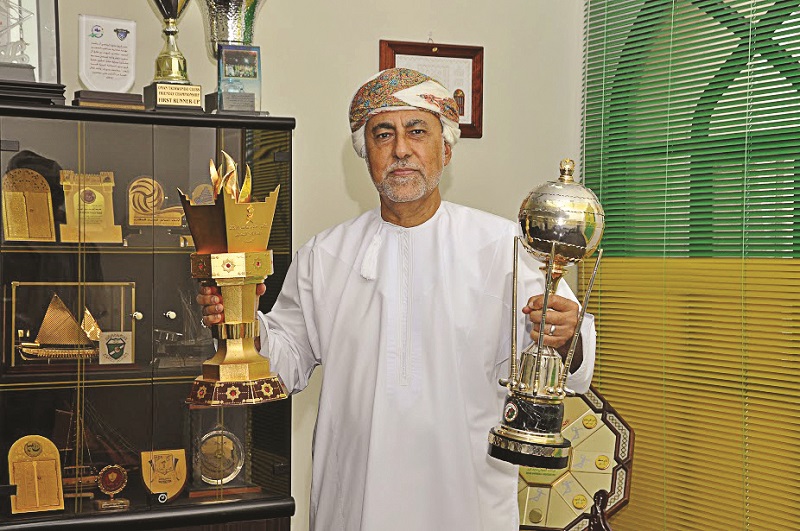 Amid the roars of 'Seebawi, Seebawi, Seebawi', Seeb Club players celebrated writing a new chapter in their club’s history as they ended a wait of more than four decades on October 31.

It was the coronation of Seeb as the domestic league champions for the first time since the club's inception in 1972.

The timing of the glorious achievement [2019-2020 Omantel League title] could not have been better as the sultanate celebrates its 50th National Day.

Hours after the title triumph was achieved, as Seeb defeated Saham 2-0 in the concluding round to lift the Omantel League crown at an empty Seeb Sports Stadium, the club’s chairman, H H Sayyid Shihab bin Tarik al Said, said, “We are deserving winners and the success is perfectly timed. The victory is a gift to our club fans on the 50th National Day. I congratulate our players, coaching staff, and board members, who have worked hard to bring home the title that we have been missing for the past four decades.”

Seeb's crowning moment and the success story is a testimony to the club's policies that have set an example of good governance and allround success.

Though the journey has been a rollercoaster, Seeb Club, today, serves as a role model for the other clubs in the sultanate.

Seeb was established after the merger of four clubs – Watan, Butolah, Hilal and Fida – in Seeb area.

The club has been patronised by the Royal Family from the start. His Majesty Sultan Haitham bin Tarik al Said served as the club's honorary president at and was also a board member in the seventies.

Since 1982, H H Sayyid Shihab has been thechairman and under his leadership, the club's emphasis on multi-sports have been the foundation of their allround excellence.

Unlike many other clubs in Oman, where football is the only priority, H H Sayyid Shihab believes that the bedrock for any club's success has to be equal focus on multi-sports activities.

Be it hockey, which in the seventies was the most popular sport in Oman, or indoor sports like basketball, volleyball, handball or table tennis, Seeb have won accolades aplenty

Their focus on young sportspersons led to club achieve success in various age-group competitions over the years.

acknowledged by the Ministry of Culture, Sports and Youth (MCSY). The His Majesty's Cup for Youth, is an award instituted by the MCSY, to honour the best club in the sultanate.

The trophy symbolises overall supremacy of the club in the sultanate and Seeb have won the coveted trophy a record 12 times since the award was instituted in 1998.

The latest Omantel League title under Portuguese coach Bruno Pereira, underscores the football team's recent resurgence, having once been a force to reckon with. Seeb have achieved a record hat-trick of His Majesty's Cup Football

The other clubs that have achieved are record HM's Cup nine-time winners Fanja and five-time champions Ahli-Sidab. Besides the three titles, Seeb was twice HM's Cup runner-up (2003, 2005) and came closest to winning the domestic league in the 1994-95 season, when they finished runner-up.

Seeb youth teams (U16 and U19) have won national titles on several occasions and the club have been regarded as a powerhouse in hockey too.

The club's honours list extends to table tennis, basketball, handball and volleyball with the club winning several national titles in these sports disciplines.

Seeb's 2019-20 top-flight domestic league campaign saw them taste defeat just once in the 26 rounds they played.

H H Sayyid Shihab lauded the character of the players during the title-winning season as they faced many challenges due to disruptions caused by the COVID-19 pandemic. The club had returned to the top-flight in the 2018-19 season, and in their first year since gaining promotion, the club have achieved their long-cherished dream.

Seeb had been relegated from the top-flight in the 2014-15 season and after spending three years in the OFA First Division, the club's fairytale comeback ended on a glorious note.

Speaking about the success, Yousuf al Wahaibi, the club's vice-chairman, said, “The habit of winning titles for Seeb Club has not come easy. We have had a tough and long journey and we are glad to see our efforts bear fruit. To have won the prestigious His Majesty's Cup for Youth on 12 occasions, including two long streaks (five times in a row and four back-to-back titles) is an illustrious record that we are very proud of and a reflection of our overall progress.

Wahaibi added, “The secret of the club’s success is the plan and strategy charted out by our chairman, H H Sayyid Shihab bin Tarik al Said. The club offers a total of 11 sports disciplines and every year, we manage to grab a trophy in one or more sports that we take part in at the national level.”

And it is just not the success on the field that makes Seeb stand out but also the smooth administration that is ensuring a strong legacy of the club.

From infrastructure development on the club premises, which includes a shopping mall, to no-deficit club's budget, Seeb have set a high benchmark.

Wahaibi said, “Our aim is to reduce the dependence on grants from the government and make the club self-reliant. We are one of the first clubs to have a successful private-public partnership project when we completed Grand Bazar Seeb.”

Spread over 10,000sqm, Grand Bazar Seeb is a mall that has boosted the club’s financial well-being and is a pioneering initiative with nearly 300 outlets.

Having won the Omantel League title, Seeb have ended their 44-year wait since the top-flight league began in 1976.

As Oman celebrates the 50th National Day, Seeb's success story is a good example to follow for many other clubs in the sultanate.