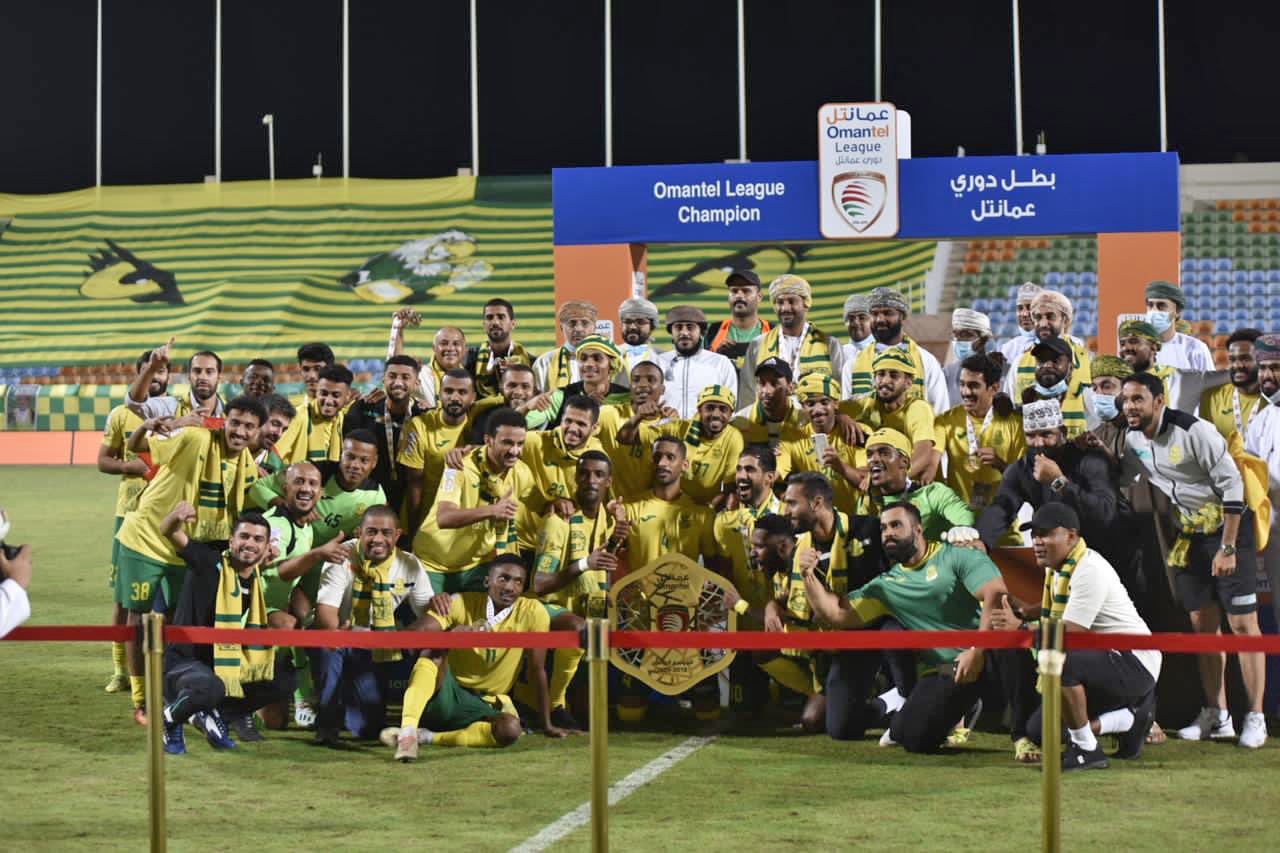 'The wait is finally over. A dream come true. We have waited for long. We deserved it. It is a reflection of the hard work put in by the players and the board.'

These were the words and remarks expressed by the celebrating fans soon after Seeb Club scripted a new chapter in their history by claiming the first-ever top-flight domestic league football title on Sunday.

The wait for 44 years ended when Seeb defeated Saham 2-0 at the Seeb Sports Stadium to earn the 2019-2020 Omantel League title. The victory meant that the winners garnered 57 points to dethrone defending champion and 11-time champions Dhofar, who finished second with 52 points, after they drew 0-0 with arch-rivals Al Nasr in a Salalah derby on Sunday.

Amid the chants of ‘Seebawi, Seebawi, Seebawi’, the players then celebrated the title on the pitch with each player having a photo shoot with the glittering winner's shield.

Al Nahda clinched the third spot as they recorded a 4-1 win over relegated Mirbat to finish with 40 points.

The season belonged to Seeb. The club ended their fantastic campaign with just one defeat in the 26 matches played. With 16 wins and nine draws, the team under Portuguese coach Bruno Pereira, fulfilled the ambitions and dreams of their thousands of fans.

Ahead of the final round game against Saham, Seeb just needed a draw to clinch the title as they had a three-point lead over Dhofar with a round to spare. But the players seemed to be determined to finish the campaign in style and started aggressively in a hunt to score early goals.

Seeb found success near the half-hour mark as Issam al Makhzoumi scored  and Seeb doubled the lead when experience Younus al Mushaifri found the target off a cross minutes before the interval.

Seeb then held on to the lead to emerge as deserving winners.

Speaking after the title victory, an emotional Seeb Club vice-chairman Yousuf al Wahaibi said, “It is a dream come true. I would like to thank our club chairman H H Sayyid Shihab bin Tarik al Said for his strong support for the past many decades.

“The players and the coaching staff showed great character and determination despite the challenges posed by the disruption of the Omantel League due to the coronavirus pandemic.

“And most importantly a big thanks to our fans. Their support has been invaluable.”

A delighted coach Pereira said, “This win is for our fans who stood by us throughout the season. I thank the Seeb board for their trust in me.

“We deserve the title as we were consistent throughout the season with only one loss. It was a tough campaign as all teams wanted to defeat us. It is time to celebrate. I am very happy for my players as they did their best during the long season.”

It has been an extraordinary story for the three-time His Majesty's Cup champions under the leadership of H H Sayyid Shihab bin Tarik al Said. The club had returned to the top-flight in 2018-19 season and in their first year since gaining promotion, the club have achieved their long-cherished dream.

Seeb had been relegated from the top-flight in 2014-15 season and after spending three years in the OFA First Division, the club's fairytale comeback ended on a glorious note on Sunday.

Seeb, once a heavyweight in domestic football, had the honour of achieving hat-trick of HM's Cup titles – only two other clubs have this record to their names.

The other clubs that have achieved the feat are record nine-time winners Fanja and five-time champions Ahli-Sidab. Seeb achieved the remarkable feat when it won from 1996-1998 and it was during this time that the club came closest to winning  the domestic title.

Seeb have strived for allround sports development and excellence, and are considered to be a role model for clubs in the sultanate. The club to their credit have won domestic league

However, the one trophy that has been missing from their  cabinet was the top-flight football league trophy and having now claimed it, the club can boast of all major sporting honours in the sultanate.

Ahead of their final round game on Sunday, Al Nahda got a boost when the Oman FootballAssociation (OFA) disciplinary panel upheld their appeal against already-relegated Al Arouba and awarded them a 3-0 win.

Al Arouba was punished for the second time in recent days for fielding a foreign player who had broken the quarantine rules.

They had got a similar decision after Suwaiq had protested.

The three points catapulted Nahda to the third spot and a win against Mirbat on Sunday helped them finish with 40 points.

In the other matches on the final day of the season, relegated Oman lost to Muscat 0-1, Bahla defeated Al Suwaiq 2-0 and Arouba bowed out with a thrilling 3-2 win over Al Rustaq.

Bahla ended sixth with 35, edging Muscat on goal-difference as the latter too garnered 35 points.

Suwaiq despite the loss came eighth with 35 points while Rustaq ended ninth with 33. Saham and Sohar finished tenth and 11th while Oman, Al Arouba and Mirbat, were relegated.