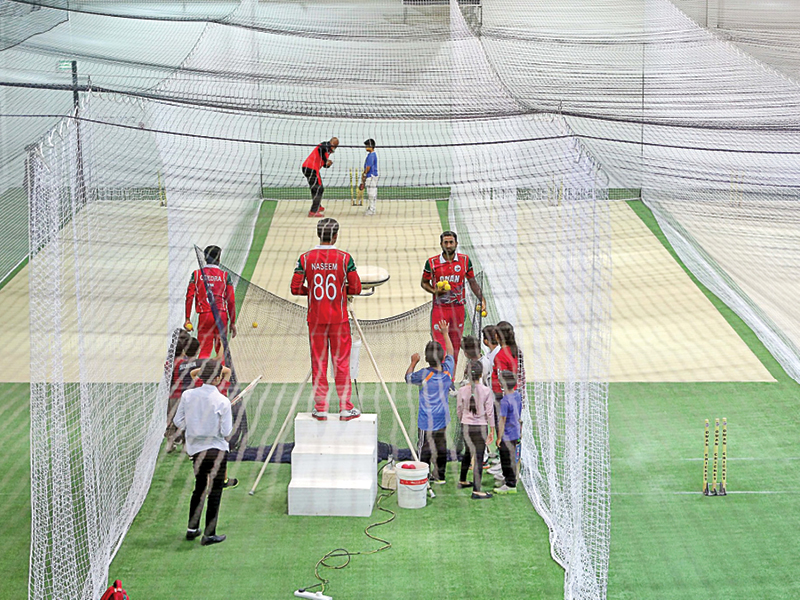 : With world-class facilities and a highly-qualified team of coaches, the Oman Cricket Academy (OCA) at Al Amerat offers the best option for aspiring cricketers in various age-groups

The set-up comprises experienced coaches from across the world. From a South African who has been part of the Bangladesh Cricket Academy and Uganda national team, to a trainer who was a first-class cricketer in England, to an assistant national coach of an Associate country. Then there is also a national team video analyst and a physical trainer who is working with the T20 World Cup-bound Oman team.

Adding weight to these long list of credentials are the world-class nets facilities that welcomes aspiring players to the Oman Cricket Academy (OCA), a venue developed by Oman Cricket (OC) in Al Amerat.

Enveloped by two lush green grounds, with a third in the making, that have witnessed some glorious victories and moments for the national team and Oman Cricket in recent years, the OCA is now fully running.

The mission is crystal clear - just not offer top-class coaching facilities and trainers but also focus on specific talents and enhance the technical capabilities of players.

The OCA recently welcomed the early birds on its premises after the Supreme Committee tasked with tackling COVID-19 gave the green signal for resumption of sports activities.

In an exclusive chat with Muscat Daily, Evert Laubscher, the OCA manager, said, “It has been a great feeling to begin the coaching activities at the OCA.”

Laubscher, who hails from South Africa and is a Cricket South Africa (CSA) Level 3 coach said, “We had begun the process of registration in early March but all sports activities were halted due to the coronavirus pandemic. Now, after the Supreme Committee allowed the resumption of sports activities, we are glad to start the OCA and have received an encouraging response.”

The OCA head, who is also the Oman senior team trainer added, “The OCA offers world-class facilities for children of different age-groups. The groups and individuals will be put under the care of a team of dedicated highly-qualified coaches who have wealth of coaching experience at the highest level.

“The Oman Cricket board’s endeavour is to have a world-class academy and it can be measured from the various facilities at the academy – be the eight indoor nets, which has different playing surfaces – spin, medium fast and fast. And to compliment these surfaces, we have two bowling machines. Our main focus and emphasis is on developing the technical skills of students at the OCA.”

Along with Laubscher, who is also a Biokineticist, the OCA coaching staff comprises Adeel Shafique, a first-class cricketer from United Kingdom, who is an England and Wales Cricket Board (ECB) Level 3 coach. He also is a member of the prestigious Marylebone Cricket Club (MCC) and played for MCC and Nottinghamshire teams.

The other senior coach is Oman's popular Mazhar Saleem Khan, who has been serving the national senior team as an assistant coach for the past 14 years. The former Oman international is an ACC Level 3 coach.

Besides these vastly-experienced coaches, OCA has recently decided to get three national team players to assist them in the academy. They include two current players - Syed Aamir Kaleem and Sanuth Ebrahim and one former Oman allrounder Syed Aamir Ali. While both Kaleem and Ali also have ACC Level 1 coaching certificates, Ebrahim has Level 1 coaching qualifications from MS Dhoni Cricket Academy.

Laubscher said 'all those at the academy can be assured of being provided professional and innovative coaching for all ages and levels of ability'.

“Our coaches will make every session structured and productive. We have designed intensive training programmes, which not only works on the skills of the game but also on strategy, tactics and physical conditioning,” he said.

“We have different modules for various age-groups and also offer tailor-made personalised lessons and group classes. Our emphasis is to have a continuous programme on all round development. With a qualified coaching set-up that includes a physiotherapist, physical trainer, batting and fielding coaches and above all a video analyst, we provide a professional coaching environment unmatched in Oman,” said the South African, who had previously worked with the Bangladesh Cricket Academy and the Uganda national team.

Laubscher, who has been with the Oman senior team since October 2018, was appointed as the OCA manager a year later. Going by the early response, the South African is upbeat.

He said: “We have now nearly 30 kids in different age-groups who are coming to our facilities. We offer coaching for players from the age of nine. There are regular sessions for five days in a week and we also plan to offer them our state-of-the-art gym soon. With clean and sanitised changing rooms, players can be assured of strict health protocols in place. Each session is for an hour while individual lessons will be of 45 minutes duration each day. Later on, we will also have the option for our students to train on our green grounds.

He added, “Each coach will be supervising a group of only five to ten students. There is a mandatory registration fee of RO10, which allows the trainee to have an OCA-branded shirt, trouser and a cap. The coaching fees structure is RO20 per month for kids between nine to 11 years old and RO30 monthly for players between 13 and 19 years.”

Laubscher said, so far 'only one girl child has registered' but the OCA is open to all.

Omani children to get free coaching

Oman Cricket (OC) has been keen to promote the game among the Omanis and the growing number of Omani players in the domestic league underlines the steps taken by the OC.

With a view to further promote cricket among the Omani children, Laubscher said: “The OC board has decided to waive off the coaching fees for Omani children at the academy.

“However, they need to pay the registration fee (RO 10). The initiative is part of OC’s mission to make the game more popular among Omani children.”