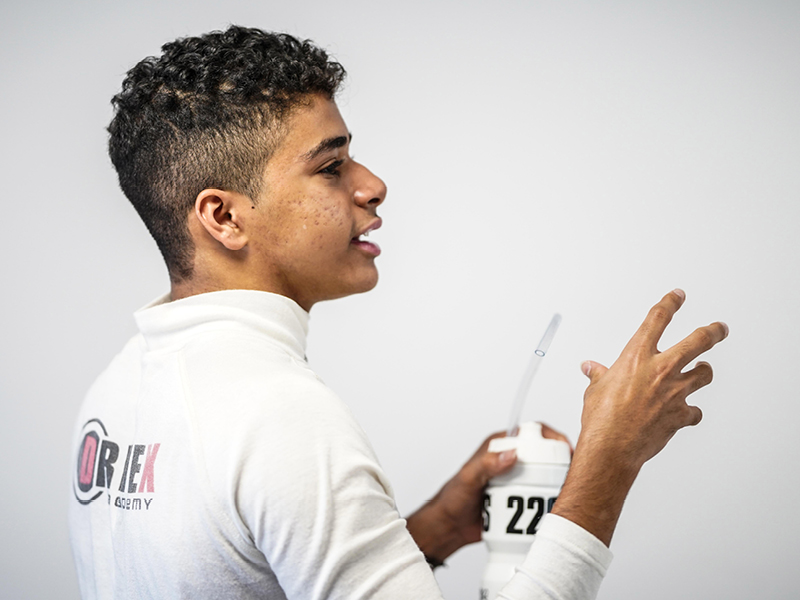 In his debut Euroformula Open Series season, the 16 year old Omani driver has managed to pick up points from three rounds and is currently placed 12th among 15 drivers. Following the latest race at Red Bull Ring in Austria on Sunday, Shihab has sought for more corporate support to pursue his campaign

It was in July that the picturesque Red Bull Ring in Spielberg, Austria, kicked off the delayed Formula One season with Mercedes' Valtteri Bottas claiming the season-opener. On this weekend, the same venue, which hosted the opening two rounds of the F1 season, was host to back-to-back races of the third round of Euroformula Open (Formula 3) Series. And making an impression at the famed circuit was Oman's 16 year old talented driver, Shihab al Habsi.

In his maiden Euroformula (EF) Open season, Shihab, who is part of the Drivex team, managed to garner five points with his latest efforts in the double-header at the Red Bull Ring.

Shihab, who is the youngest driver on the grid,  finished eighth on Sunday, the second race, to collect four points, a day after he had bagged P10 to pick a point in the earlier race on Saturday.

Following three rounds held in Hungaroring in Budapest, Paul Ricard in France, and Red Bull Ring, Shihab has now six points in the championship standings. He is placed overall 12th among the 15 drivers.

Germany is second with 75.The gulf of points between the leaders and Shihab may be huge but the Omani attributes it to lack of experience and testing on the tracks.

In his exclusive chat with Muscat Daily from the Red Bull Ring soon after finishing his race on Sunday, Shihab said, “I don't expect to be among the top. For me, it has been a real challenge as I had no testing on this track ahead of my first race on Saturday as technical problems forced me to sit out of the practice session.

“My rivals are much more experienced and senior to me. They have had good testing sessions. With lack of testing, it is a very difficult proposition in this F3 series, with a new car. It is a demanding car and one needs a lot of testing and experience to climb to the top.

“For me, this debut season is all about learning. I have the confidence but lack of track time has cost me dear so far. It has been a learning experience so far.”

Shihab made a decision to graduate from Formula 4, where he competed for the last two years across Asia and Europe and joined Spanish team Drivex in July.

Last year, Shihab finished third in the points in his full season in F4 UAE, and came an impressive fourth and eighth in the standings respectively in his part-time campaigns in South East Asia and Spain. Due to travel restrictions from the coronavirus pandemic he was unable to complete a pre-season test in Euroformula’s brand new lightweight Dallara 320, and his first taste of the car was directly on track in Hungary.

The Omani opened his account in the opener despite the lack of testing with a P10 but then failed to be among the top-ten in the next race and the following two races at Paul Ricard. “My team [Drivex] is still getting a hang of my racing  style. It will take them some more time before we click better. It is a dream come true to be competing in the Euroformula Open championship,” said Shihab.

The talented teen said, “I am lucky to have support from Ministry of Culture, Sports and Youth, and my sponsors – Omantel, Oman Oil Marketing and Oman Air. But the budget for the full championship series is still a big constraint. Lack of funds has also forced me to skip testing sessions.

“I am not sure if I will be able to complete the Euroformula Open Series with five more rounds left. At this moment, my participation in the next round in Monza, Italy, on September 26-27 is also in doubt.

“It is tough to concentrate and compete if I don't get the financial backing. My father, Ahmed, has been trying hard to convince sponsors but we suffered a jolt earlier this year when a key sponsor backed out.”

Shihab said that he was 'looking to do better' in the coming rounds, provided there is enough of financial support to take him through the series. The youngster, who dreams to make it to the Formula One in future, is the only Omani in the series.

“I am proud to be flying the sultanate flag at the championship and I hope to earn laurels as I gain experience and compete against the best. I am determined to make the country proud with my achievements on the circuit.”

After signing Shihab, Drivex Team boss Miguel Ángel de Castro had said, “It is a pleasure to welcome Shihab to Drivex because he is a youngster who should be considered a huge prospect and we feel sure Drivex will be able to live up to his full potential.

“Despite his youth, Shihab has gained experience in several top feeder series around the world, in which he proved to have race-winning potential.

“For sure, the Formula Three-based EF Open is another step forward in his racing career with a car generating much more downforce, which is also more physically demanding. It is going to be a real challenge for him but I have no doubts he is ready to take up this new chapter. We feel excited with our pairing of Dutchman Glenn (van Berlo) and Shihab.”

Middle Eastern entries have a strong track record in  Euroformula, with Lebanese team Cedars Motorsport running Marco Barba to the driver’s title and Lebanese driver Noel Jammal to the Copa class title in 2010 as well as topping the teams standings, and Emirati Ed Jones winning the 2013 title before setting off for a career in IndyCar.