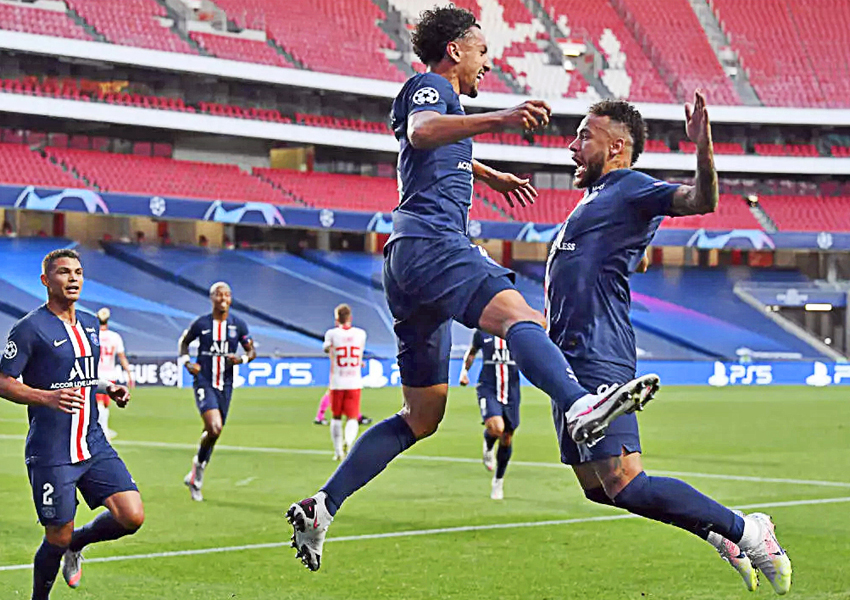 PSG through to their maiden Champions League final

Nine-time French League champions Paris Saint-Germain (PSG) are through to their first Champions League final, thanks to a flawless and dominating performance on Tuesday, as they trounced RB Leipzig 3-0 in an entertaining semifinal in Lisbon, Portugal.

One of Europe's biggest spenders, but also one of the continent's most high-profile underachievers on the grandest stage, PSG finally seized their opportunity, courtesy of goals from Marquinhos, Angel di Maria and Juan Bernat.

Marquinhos, who scored the first of two late goals in a comeback win over Atalanta in the last-eight, rose to head home a superbly delivered free-kick from Di Maria in the 13th minute.

The Argentine forward then finished well from close range following an audacious flick from Neymar after Leipzig goalkeeper Peter Gulacsi had relinquished possession with a dire kick minutes before the interval.

With the fit-again Kylian Mbappe and Neymar terrorising the Leipzig backline, the French side should have been out of sight before the break, but the latter twice hit the post - from a clipped finish then an opportunist free-kick from range - before side-footing another chance wide at the near post.

Prior to PSG's second, Yussuf Poulsen had Leipzig's best chance but fired wide after he was found by a Dani Olmo pull-back.

Bernat sealed the win in the second half (56th minute) with a header that Leipzig felt was offside but was legitimate as the prone Nordi Mukiele, who had slipped in the build-up, was playing the scorer onside.

PSG will face the winner of Wednesday night's semifinal between Bayern Munich vs Lyon, for the title on Sunday.

The vast sums of money pumped into the French club by owners Qatar Sports Investments since 2011 has enabled them to dominate domestically. In Europe, though, not so much.

In the three seasons prior to this one they exited in the last-16, and before that they went out in the quarterfinals four years in a row - results that ultimately cost managers Laurent Blanc and Unai Emery their jobs.

Manager Thomas Tuchel, though, has found a way to break the glass ceiling, leading the side from the French capital to their first major European final since the Cup Winners' Cup in 1997, a year before Mbappe was born.

The first and third goals gave Di Maria his 88th and 89th assists in all competitions since he joined the club in August 2015 - only Barcelona's Lionel Messi has more in Europe's top five leagues in that time.

He also now has nine goal involvements in the competition this season, surpassing the tally he managed in helping Real Madrid lift the trophy in 2013-14.

Neymar's brilliant assist took him to 23 goal involvements in 19 appearances for PSG (14 goals & nine assists) in the Champions League and while Mbappe's finishing was rusty, he was still able to regularly fashion chances for himself and others.

RB Leipzig are the babies of European football, having only come into existence in their current guise in 2009 when drinks company Red Bull bought fifth-tier side SSV Markranstadt and rebranded them.

Past finalists Tottenham and Atletico Madrid were both dispatched en route to this stage by the German side but PSG proved a challenge too far for the youngest coach in the competition and his bold side.

Julian Nagelsmann was encouraged into coaching by PSG counterpart Tuchel when the pair were both at Augsburg and the former had seen his playing career ended at the age of 20 by a serious knee injury.

Still only 33, he has plenty of time on his side and has shown more than enough to suggest he can lead a side beyond this stage.

For now, though, the master-apprentice dynamic remains intact.

PSG coach Tuchel said: "I was never relaxed, but how we defended was also the most important thing for me. We had a good mix between determination, spirit and quality.

"We stayed faithful to our style of play. When possible, we looked to control the half-spaces and control their counterattacks. And we used the acceleration of Angel, Kylian and Neymar with the ball between the lines.

"We didn't make big tactical changes. Yes, we adapt to all our opponents, but not too much. We have to show our strength, and the players again showed their hunger to win, work together and suffer."

Speaking to BT Sport, Nagelsmann, Leipzig coach, said: "The ticket for the final for Paris is well deserved. In the first ten to 12 minutes we did well and had good situations. It was hard to come back into the game after the second goal because Paris have a lot of quality. It's hard to accept but football is like this.

"It's not that easy to think about the good season we've had in the Champions League but in one week it will be ok. We know that it was a good season for a young team and we will try to do it again next season and work hard."

We ate them up from minute one: Di Maria

PSG star Di Maria was full of praise of his team after his side's dominant win.

"We ate them up from minute one," Di Maria said in quotes published on the BBC.

"It's going to be tough to sleep between now and the final.

"We worked hard all game and we showed we deserve to be here. It doesn't matter who we face, either Bayern or Lyon, we'll give our all.

"We're very happy. It's a first for the club. We worked hard and played a great game. We want to make history for the club. We succeeded tonight and we're in the final – that's very important. We have to continue like tonight to make our dream come true."

"We are just one step away from making club history," he added.

Only one French club -Marseille — has won the Champions League.

Ronald Koeman was named the new head coach of Barcelona on Wednesday, two days after the club sacked Quique Setien.

The 57 year old left his role as Netherlands boss, with two years left on his contract, to sign a two-year deal with the Spanish giants.

He played for Barcelona between 1989 and 1995, helping them to four league titles and the European Cup.

The Catalans finished second in La Liga last season, failing to win a trophy for the first time since 2007-08.

The five-point gap to champions Real Madrid and the humiliating 8-2 defeat by Bayern Munich in their Champions League quarterfinal last week culminated in the dismissal of Setien on Monday.

The club also announced Ramon Planes as the new technical director. He was the assistant to Eric Abidal, who left his role as sporting director on Tuesday.