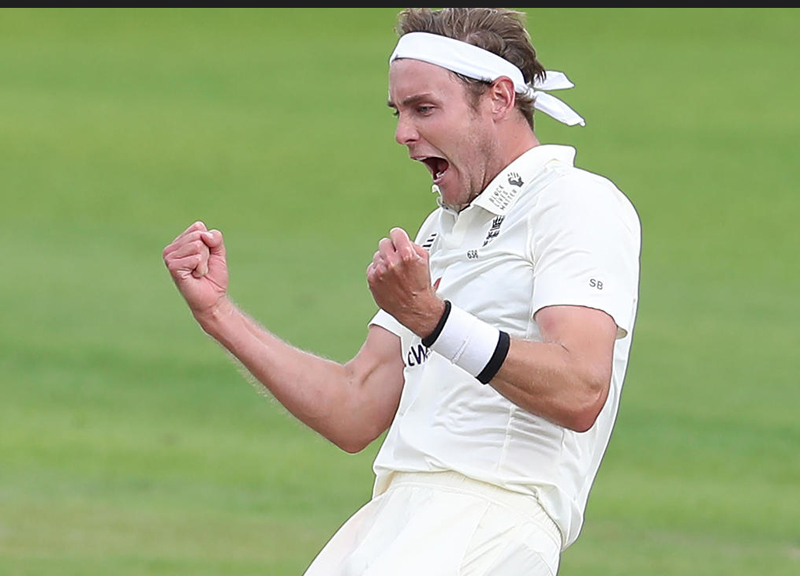 It was all about one man. Stuart Broad, in claiming his 500th Test wicket on the last day on Tuesday, sealed his dominance over West Indies in this third and final Test at Emirates Old Trafford and delivered England's fight back from 0-1 down in the series to reclaim the Wisden Trophy 2-1.

Broad's ten wickets for the match, not to mention his highly anticipated step into the 500 wickets club, overshadowed Chris Woakes' five-wicket haul.

But Woakes' contribution was no less important, given that England had to take eight wickets on a rain-affected last day to place their hands on the trophy, which will now be retired at Lord's.

Only six other bowlers in history have taken more wickets than Broad, who was playing in his 140th Test match. He is the second England bowler to reach the landmark, the other being James Anderson.

Sri Lanka's spinner Muttiah Muralitharan is the Test highest wicket-taker with 800 and is followed by Australian spinner Shane Warne with 708.

Another spinner, Anil Kumble from India, is third with 619 while pacer Anderson is fourth (589). Australia's fast bowler Glenn McGrath (563), West Indies quick Courtney Walsh (519) and now, Broad, (501) are in the exclusive club.

Broad's six for 31 helped bowl West Indies out for 197 in response to England's first-innings 369, to which he had contributed a valuable 62 from just 45 deliveries after a mini-collapse had left the hosts 280 for eight.

Rory Burns' 90 plus half-centuries to Joe Root and Dom Sibley in England's second innings pushed their lead to 398 runs and Broad then claimed the wickets of opener John Campbell and nightwatchman Kemar Roach late on the third day to put his side in command before Monday's washout.

In doing so, Broad spent from the close of play on Sunday until the final morning on Tuesday on 499 Test wickets.

Broad joined the exclusive club after a brief rain interruption early in the first session on Tuesday when he had Kraigg Brathwaite out lbw with a ball that kept low and struck the back pad in line with off stump.

Incidentally, Brathwaite was the 500th Test wicket for Anderson at Lord's in 2017.

Broad, who is the son of former England cricketer Chris, has taken two Test hat-tricks in his career - against India in 2011 and Sri Lanka in 2014 - but perhaps his most famous spell of bowling was the eight for 15 he took to bowl out Australia for 60 at Trent Bridge in 2015.

Milestone achieved, Broad made way for Woakes to do his thing, but he returned to the attack to claim West Indies' final wicket with his first ball back, Jermaine Blackwood caught down the leg side by Jos Buttler.

Broad finished as the leading wicket-taker for the series with 16 from two Tests at an average of 10.93.

Broad even had a hand in Woakes claiming his first scalp for the innings when Shai Hope skied his attempted pull and Broad ran in from mid-on to take the catch.

There was still the potential for West Indies to hold on, with the likes of Shamarh Brooks, Blackwood, Roston Chase and Jason Holder in their line-up but it was going to take something special. Woakes negated the threat of Brooks, whom he had caught behind for 22.

The tourists underlined how not to bat long with the run-out of Chase.

Woakes then had Holder, Dowrich and Cornwall out, all lbw and all cheaply, before making way for Broad's finale to dismiss Blackwood, whose 95 in West Indies' first-Test victory remained their highest individual score of the series.

Broad missed that Test, much to his chagrin, but he responded beautifully with a new-ball spell of three for one in 14 balls that helped set up England's series-levelling victory in the second Test.

The third Test, the final installment of the Wisden Trophy - England and West Indies will contest the Richards-Botham Tropy next time they meet - was iconic in many ways.

Two sides with it all to play for, behind closed doors in the first international cricket to be played since the COVID-19 lockdown.

It was the first time in Test history that a side had come back to win a series from
0-1 down twice in a row following England's triumph in South Africa earlier this year. But ultimately, it was all about one man.

"It does get a little frustrating," Buzz Aldrin once said of a lifetime of being known as the second man on the moon. When you've travelled approximately 240,000 miles further than all but an infinitesimally small proportion of humanity, it is a bit harsh to be judged in perpetuity against the only man to go one step beyond.

But then again, Broad isn't the first mighty bowler whose achievements are destined to be remembered in the context of a double act.

And far from diminishing Curtly Ambrose, or Waqar Younis, or Glenn McGrath - all of whom shared a stage with a partner who outstripped them in the wickets column - the stature of their sidekick in fact offers a secondary route to immortality; an opportunity to be remembered, quite literally, as more than just the sum of some very considerable parts.

For when you stop to think of Broad in full flow, do you really have to doublethink and factor in Anderson's presence at the other end? Or do you simply marvel, as we all have done this week, at the spring-heeled malevolence that he still carries with him to the crease after all these years, with an action of such biomechanical purity that - barring a few notable tweaks to his wrist position - it has barely altered since his earliest stirrings as a teenage prodigy for Leicestershire in the summer of 2005.

For there comes a point in the accumulation of such towering statistics that context becomes irrelevant, and the sheer scale of the achievement takes over as the defining attribute.

Broad's critics would argue he remains a bowler of great spells rather than a great bowler in his own right, but when the list of those spells - 18 five-fors now, and barely a dud among them - becomes longer than the careers of many of the men he's outlasted, well, you start to run out of caveats.

Back in 1964, Fred Trueman declared that anyone who sought to extend his then world-record of 300 would be 'bloody tired', and 30 years later, Kapil Dev epitomised that prediction as he flapped and gasped his way past Richard Hadlee's extended mark of 431, before retiring exhausted one match later.

Even the mighty Courtney Walsh had lost a measure of his indefatigability by the spring of 2001, when he became the first seamer to 500 in his final home series against South Africa.

But Broad, right here right now, is performing with the fury of the slighted, and the confidence of the blessed. All angles and attitude, the spring of a lamb and the snap of a crocodile, that evoke nothing less than Ambrose in his pomp. 'Sacrilege!' some might argue, but really, who else could compare?

After all, both men have thrived on a scent of blood in the water, a whiff of cordite in the nostrils.

A threat to their hegemony, or an insult to be avenged. And at the given moment, almost invariably with a series on the line, both men's knees would start pumping, their torsos bouncing to the crease like an out-of-body experience, preternaturally excited about what this next delivery might bring.

But the mechanics are one thing, it's the moods that are quite something else. Broad's reading of a situation and his ability to strike accordingly has been second to none throughout the course of his career, right from the moment, as a 21 year old, he was pitched into the fray in the winter of 2007-08 and lauded by Michael Vaughan as 'the most intelligent bowler I've ever worked with'.