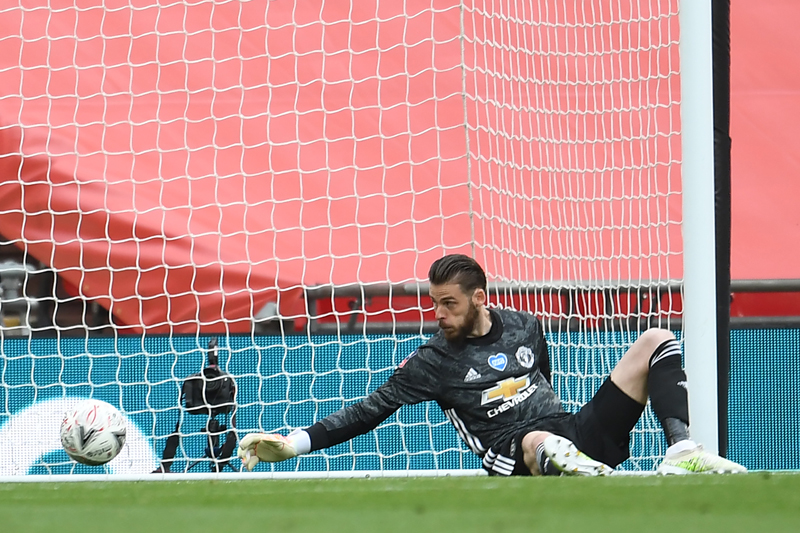 Manchester United goalkeeper David de Gea endured a Wembley nightmare as Chelsea strolled to a 3-1 victory and set up an FA Cup final date with Arsenal on August 1.

De Gea made a flimsy attempt to deal with Olivier Giroud's flick in first-half stoppage time then weakly fumbled Mason Mount's tame 20-yard shot into the net moments after the restart.

Chelsea's excellent performance fully merited this victory and United's abject misery after a dreadful performance was complete when captain Harry Maguire diverted Marcos Alonso's cross into his own net at the near post with 16 minutes left.

Frank Lampard's side were in complete control from first to last as they comprehensively ended United's 19-match unbeaten run in all competitions.

Bruno Fernandes pulled a goal back from the penalty spot late on after Callum Hudson-Odoi fouled Anthony Martial but it could not even be described as a consolation as Chelsea closed out the win.

Lampard is now in position to make his first season in charge a highly satisfactory one as they contemplate a place in the FA Cup final and lie third in the English Premier League (EPL), in position to reach next season's Champions League.

And no-one can question their right to this win as they dominated from start to finish, particularly in midfield, where they were able to subdue the influence of the talented Fernandes.

Once again 33 year old Giroud demonstrated his influence, leading the line selflessly and being rewarded with that crucial first goal, even though it received a large helping hand from De Gea.

Chelsea were more energetic, dangerous and aggressive and while they were thankful to those mistakes from De Gea, the margin of victory was no more than they deserved.

United went into this semifinal high on optimism on that long unbeaten run and with the sense that Solskjaer was starting to get to grips with the big rebuilding job.

That continues and United are still in decent shape to reach next season's Champions League, either via the EPL or Europa League, but this was a savage setback.

And the main culprit was De Gea, who gives the impression of a goalkeeper either in permanent decline or going through a very long slump.

De Gea changed the face of this FA Cup semifinal with those mistakes, allowing Chelsea to transform their dominance into a two-goal lead.

Solskjaer to back goalkeeper de Gea

"[David] knows he should save that one 100 times out of 100 but that's football for you," said Solskjaer.

"It is done. Move on. I know he is a mentally strong person and goalkeeper."

Asked if he is going to stick by De Gea, Solskjaer said: "Of course. We have been unbeaten for 19 games and both Sergio [Romero] and David [De Gea] have played really well in that run.

"We have kept clean sheets, and on Thursday night, he made some great saves against Crystal Palace. I see where you're coming from and everyone is going to make headlines on David, but he knows he should have saved that one.

"I can't speak for his confidence but he is mentally very strong. Everyone has to perform and has a chance to stake a claim every time they play.

"It is hard for a keeper to make amends, apart from David making two or three fantastic saves."

Tottenham boosted their chances of Europa League football next season and inflicted a huge blow on Leicester's Champions League ambitions with a 3-0 win on Sunday in an EPL game.

Brendan Rodgers' Leicester side have been in the EPL's top-four for much of the season but this devastating away defeat leaves them with a difficult task going into their final league game next Sunday.

The Foxes finish the season against fifth-placed Manchester United, but should the Red Devils beat West Ham on Wednesday and claim a draw at the King Power, they will be assured of a top-four finish at the expense of Leicester.

Jose Mourinho's side move up to sixth in the table, two points clear of Wolves, but Nuno Espirito Santo's side have a game in hand.

Lionel Messi won his seventh Spanish League (La Liga) golden boot - and his fourth in a row - after scoring twice in Barcelona's 5-0 win over Alaves on the final day on Sunday.

The game was not of importance as Real clinched the La Liga title on Thursday.

Messi rounded the keeper to make it 2-0 and swept in a fifth - with teenager Ansu Fati, Luis Suarez and Nelson Semedo scoring the other goals.

This is the first time La Liga's top scorer has managed fewer than 30 goals since Mallorca's Daniel Guiza 12 years ago.

Celta Vigo's goalless draw at Espanyol was enough to keep them up by a single point at the expense of Leganes.

Captain Sergio Ramos netted his 12th goal of the season by heading in from Isco's cross for Real, who had wrapped up the title in their previous game.

Bryan Gil and Roger Assale netted either side of Marco Asensio's strike but it was not enough for the visitors.

Zinedine Zidane's side will look to overturn a 1-2 first-leg loss against Manchester City in the Champions League last-16 when they return to action in August.

(With inputs from BBC Sport and agencies)