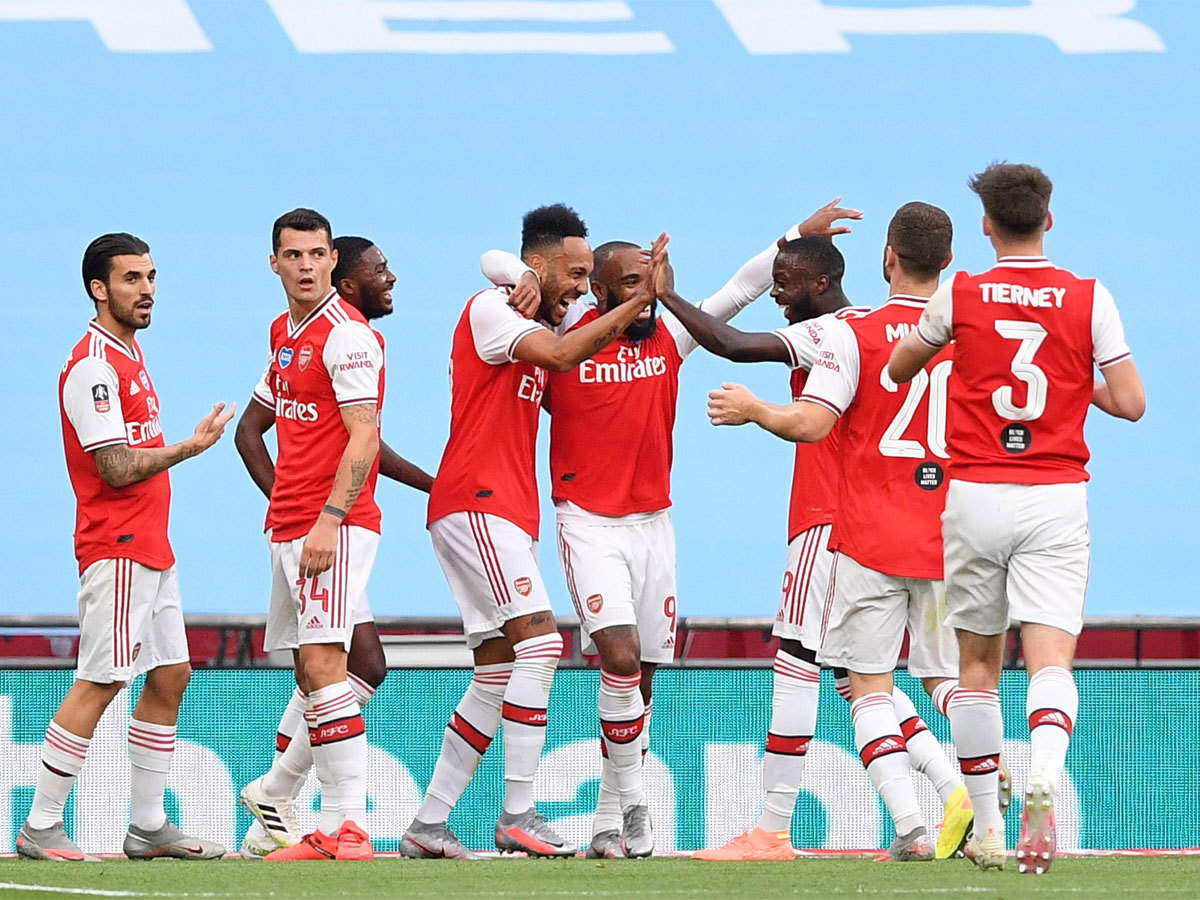 Mikel Arteta's Gunners outplayed Manchester City 2-0 at Wembley on Saturday. They now await the winner of the other semifinal between Manchester United and Chelsea.

Arsenal manager Mikel Arteta got the better of his mentor Pep Guardiola as the Gunners reached the FA Cup final with 2-0 victory at Wembley on Saturday.

Arteta, who left his job as Manchester City assistant manager to succeed Unai Emery at Arsenal in December, now has a chance to mark his first season in charge with major silverware when they face Chelsea or Manchester United in the final on August 1.

The match-winner was Pierre-Emerick Aubameyang, the world-class striker Arsenal are desperate to secure on a new long-term contract, as he ruthlessly exposed City's defensive deficiencies.

Aubameyang had already shot straight at Ederson with one clear chance but there was no escape for City after 19 minutes when he showed great technique to steer home Nicolas Pepe's cross with the outside of his foot at the far post.

City dominated possession after the break but squandered their opportunities and Aubameyang made them pay once more in the 71st minute when he raced away on the angle to slide a composed finish under the keeper.

This was a personal triumph for Arteta and completes a superb week after the victory over English Premier League (EPL) champions Liverpool at Emirates Stadium on Wednesday.

As against Liverpool, Arsenal were well-organised and resilient at the back, willing to throw bodies on the line to repel the wave of City attacks in the second half as the holders tried to hold on to the FA Cup.

The spearhead, however, was the 31 year old Gabon striker Aubameyang, who was a huge threat throughout and illustrated exactly why he is among the game's elite group of strikers.

An ever-present menace, his two finishes were of the highest quality and demonstrated his big-match temperament.

Aubameyang has now scored 66 goals for Arsenal in all competitions. Since his debut for the club, only Liverpool's Mohamed Salah (68) has scored more among EPLplayers.

This is why Arsenal are so keen to get his signature on a lucrative new deal - and why they will have a chance of winning the FA Cup no matter who they face in the final.

City rightly receive plaudits for their classic purist style - but there is a faultline running through this team that manager Guardiola simply must address.

This is a side that can defeat anyone but also has a soft centre that makes them eminently beatable - there is a reason why they have lost nine times in the EPL this season.

Guardiola's side can be cut and carved open, as they were twice by Aubameyang.

As at Southampton recently, they had plenty of the ball after going behind but could not find a cutting edge. This is where master finisher Sergio Aguero is missed, especially as this was one of those rare occasions when Kevin de Bruyne's radar was faulty.

City romped to a 6-0 victory in last season's final against Watford, but there will be no repeat this year and that is because there are faults in this team that Arsenal - led by Arteta - were able to exploit.

Later Arteta told BBC Sport: "We've had an incredible week to beat the best two teams in Europe, it doesn't happen every day.

"I don't care who plays, I can trust them - we made changes and everyone was ready.

"We had to suffer in many moments. We had to be really well-organised and minimise the spaces."

On seeing Guardiola after the game, Arteta said: "I high-fived him after the game and wished him luck. I love him like yesterday or this morning the same way."

Guardiola admitted that his team did not play good enough.

"We didn't make a good performance, we were not ready enough. If you don't play for 90 minutes in a semifinal this can happen. We didn't play good, we are human beings. The opponent played good, sometimes it happens,” he said.

Guardiola added: "The only regret is that we didn't play the first half like we played the second one. We had to change the set-up but we couldn't do it."

Arsenal have reached the FA Cup final a record 21 times, with the Gunners also winning the competition more than any other side (13). They have eliminated the holders of the FA Cup on each of the last six occasions they've faced them.