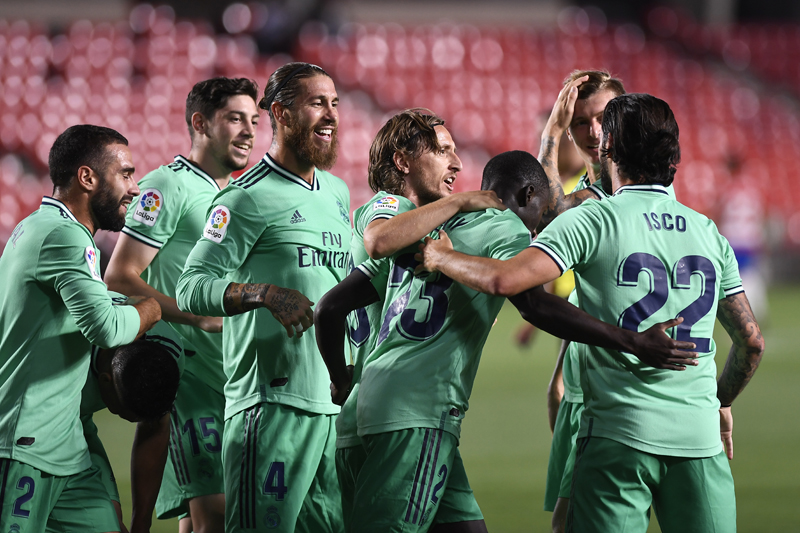 REAL MADRID A WIN AWAY FROM LA LIGA TITLE

Spanish giants recorded their ninth successive win by beating Granada 2-1 on Monday and are now just a victory away from claiming their 34th La Liga title. Elsewhere, Southampton dented Manchester United's top-four hopes in the EPL with a late equaliser at Old Trafford.

Spanish League (La Liga) leaders Real Madrid moved to within one win of the La Liga title after surviving a scare against hosts Granada, winning 2-1 to record their ninth successive victory.

France defender Ferland Mendy opened the scoring with a ferocious finish from a tight angle in the tenth minute before countryman Karim Benzema doubled the lead six minutes later.

But Real were forced to endure a nervous second half after Darwin Machis fired through Thibaut Courtois' legs in the 50th minute.

Given Real's superior head-to-head record over Barca, Real require two points from their final two games, at home to fifth-placed Villarreal on Thursday and at relegation-threatened Leganes on Sunday, to win the 34th league title.

Zidane celebrated wildly when the full-time whistle came and praised his side for coping with Granada’s late onslaught.

“I let out a shout because I was happy and because in football you have to suffer,” said the Frenchman, who is closing in on his second La Liga title in under four years as Real coach along with three Champions League crowns.

“I shouted out loud because the three points were very important and I wanted to tell my players that they had played a superb game. To win this league you have to suffer a little bit and we dug in as a team. You have to be proud of this team.”

"We will be back training on Tuesday and we will be back on the pitch on Thursday. The final minutes were tough. Granada made us defend a lot in the second half," Zidane added after his side's ninth successive win since La Liga resumed in June.

Captain Sergio Ramos said, “It's true that we're one step closer but we have to keep going, there are still more points to play for and we're going to try and win every game left as that was always our objective.”

“I really hope we can celebrate winning this league title, our results speak for themselves.”

Gareth Bale was once again an unused substitute as Real scored twice in six first-half minutes before the hosts hit back.

Real's in-form goalkeeper Thibaut Courtois made the first of two fine saves by tipping away a shot from defender Domingos Duarte before the break and Venezuelan forward Darwin Machis pulled one back early in the second half.

It was the first goal Real had conceded in six matches but Granada threatened to equalise as Machis missed the target on the volley while Courtois showed superb reflexes to deny forward Antonin late on.

Ramos was then the hero as he cleared a Ramon Azeez shot off the line seconds later and the leaders had to withstand a goalmouth scramble in added time.

Villarreal out of  top-four contention

Villarreal's hopes of finishing in La Liga's top-four ended with a 2-1 defeat at home to Real Sociedad on Monday, meaning Sevilla has qualified for the Champions League.

Sociedad's Brazilian striker Willian Jose broke the deadlock just after the hour mark before defender Diego Llorente added a second in the 75th minute before Santi Cazorla pulled one back for the host late on.

The result left Villarreal fifth in the standings with two games left on 57 points after 36 matches, nine behind Sevilla which won 2-0 at home to Mallorca on Sunday and returns to Europe's elite club competition after a two-year absence.

Elsewhere, Alaves picked up a valuable point in its bid for survival by drawing 0-0 at home to Getafe. The draw ended a run of six consecutive defeats for 17th-placed Alaves and took it to 36 points after 36 games, four points clear of the relegation zone. Getafe is sixth on 54.

Manchester United manager Ole Gunnar Solskjaer said on Monday night that his players 'will put it right' after they missed a chance to climb into the English Premier League's top-four by conceding an injury-time equaliser against Southampton at Old Trafford on Monday.

United led 2-1 for 73 minutes before substitute Michael Obafemi scored in the 96th minute, bundling in a set-piece at the back post after it had been flicked on by Jan Bednarek.

Stuart Armstrong had given Southampton a 12th-minute lead, but Anthony Martial set up Marcus Rashford to equalise before firing a superb second goal for United.

Solskjaer's side were on course to leapfrog top-four rivals Chelsea and Leicester - who both suffered defeats over the weekend - and move up to third but they remain fifth with three games left in the chase for Champions League qualification.

"The mentality has been brilliant. We have had a few setbacks this season. This is another challenge for us," said Solskjaer.

"I am very confident in [the players'] mentality. I'm disappointed of course, but you have to take the disappointments as well as the positives. We have learned a hard lesson. We will put it right. I trust the boys in that respect."

Southampton now sit five points outside of the top-ten and level on points with Everton.

Despite United's setback, they will still qualify for the Champions League if they win their last three games, as they travel to the King Power Stadium to face Leicester on the final day of the season.