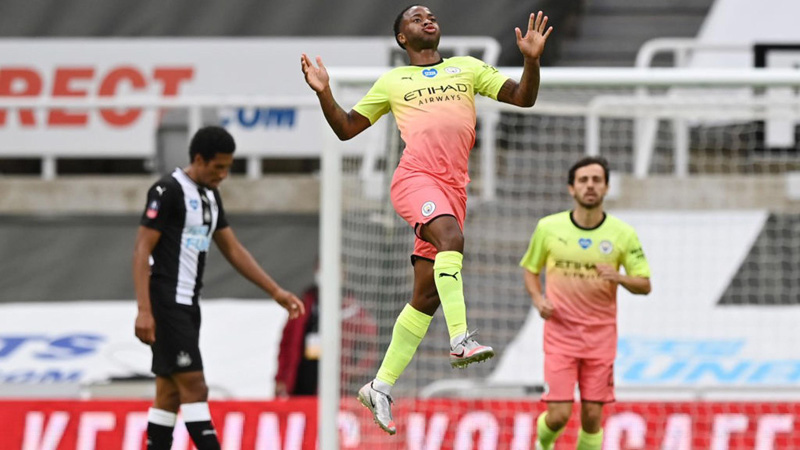 Holders City will take on Arsenal for a place in the final while the other semifinal will pit Manchester United against Chelsea. Elsewhere, Real Madrid edged Espanyol to go top of La Liga

Holders Manchester City will face Arsenal in a FA Cup semifinal line-up after they beat Newcastle United 2-0 at a quiet St James' Park in Newcastle, UK, on Sunday.

In the other semifinal, Chelsea set up a clash with Manchester United after the Blues beat Leicester City 1-0 at the King Power Stadium on Sunday.

The last-four draw features three of the Cup's four most successful sides, with Arsenal the record 13-time winners.
United, who beat Norwich to reach the last-four on Saturday, have won it 12 times, while Chelsea have eight wins.
Both ties will be played at Wembley on July 18-19.

The final is scheduled for August 1 at the same venue.

The win kept City on course for a cup treble after conceding the English Premier League (EPL) title to Liverpool last week.

Raheem Sterling took the match beyond in the 68th minute after he raced down the other end and slotted into the bottom corner with an exquisite curling finish for his 22nd goal of the season.

The win extended City's winning FA Cup run to ten games. Having already won the League Cup and with a lead over Real Madrid in the last-16 of the Champions League, it could still be a memorable season for Pep Guardiola's side.

Ross Barkley came off the bench to send Chelsea to Wembley as manager Frank Lampard's half-time changes transformed their FA Cup quarterfinal with a 1-0 win at Leicester City on Sunday.

The Foxes held sway in the first 45 minutes at the King Power Stadium, although it took a flying save from Leicester keeper Kasper Schmeichel to keep out Christian Pulisic's powerful drive.

It had the desired effect as Chelsea improved markedly. Barkley, who was on target in the 2-0 win against Liverpool in the last round, scoring the winner after 63 minutes when he reacted to get in just ahead of Jonny Evans and sweep Willian's clever cross past Schmeichel.

Lampard and Chelsea have had an impressive re-start, winning at Aston Villa and getting a crucial three points at home to Manchester City in the EPL.

Those results kept them right on course for a top-four finish and now they are in an FA Cup semifinal.

Arsenal remain in the hunt for silverware to brighten their underwhelming season after Dani Ceballos' 91st-minute winner took them through to the FA Cup semifinals at Sheffield United's expense with a 2-1 verdict.

The Gunners had led from midway through the first half when Nicolas Pepe had slotted home a penalty after Alexandre Lacazette had been fouled in the box by Chris Basham in the 25th minute.

The FA Cup has provided a shining light for Arsenal during a period that has seen them fail to replicate the consistent title challenges of Arsene Wenger's first ten seasons in charge. They have won it three times in the six seasons prior to this, the latest coming in 2017.

In a campaign that has seen Mikel Arteta only just begin to pick up the pieces of Unai Emery's faltered regime, the world's oldest cup competition is again their last shot at glory.

It also offers the Gunners' most likely route back into Europe, after just one win from their three league games since the restart left them ninth in the EPL.

Real Madrid are two points clear at the top of Spanish League (La Liga) after grinding out a 1-0 victory at bottom club Espanyol. The win took Zinedine Zidane's side tally to 71 with Barcelona at second spot with 69.

Casemiro scored the only goal as he latched onto Karim Benzema's brilliant no-look backheel through the legs of defender Bernardo Espinosa before firing home in the 45th minute.

The Brazilian had earlier gone close to the opener when his shot from his own half was saved by Diego Lopez. Espanyol had several chances with Thibaut Courtois making five saves.

Sporting director Francisco Rufete took over as manager on Saturday after replacing Abelardo Fernandez - the third Espanyol boss to be sacked this season.

They put up a good fight, with Wu Lei among the players to go close, but fell just short.

Real Madrid are now only six wins - or five wins and a draw - from a second La Liga title since 2012.

City rivals Atletico can do them a favour when they visit Barca on Thursday.