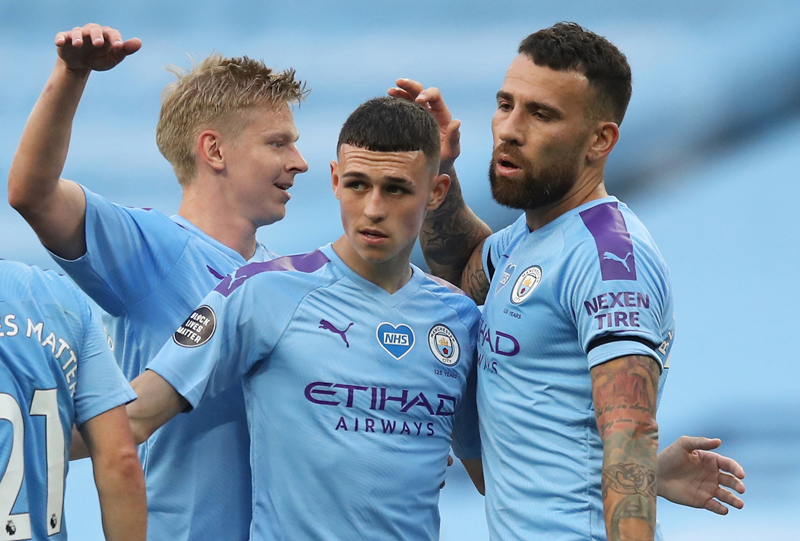 BURNLEY 'ASHAMED' AND 'EMBARRASSED' BY OFFENSIVE BANNER DURING CITY GAME

Phil Foden and Riyad Mahrez scored twice each as Manchester City trounced Burnley but the lop-sided win at the Etihad Stadium was overshadowed by an offensive banner flown during the game. Elsewhere, Ronaldo scored as Juventus eased past Bologna in Serie A

Burnley captain Ben Mee admitted he was ashamed after an offensive banner was flown over the Etihad Stadium during the team's 0-5 loss by Manchester City on Monday evening.

A plane carrying the message 'White lives matter Burnley' flew over the ground in the early stages of the team's first English Premier League (EPL) game since the league resumed on June 17 behind closed doors amid the coronavirus pandemic.

It occurred just moments after all players had taken the knee in support of the Black Lives Matter movement at kick-off.

The club issued a strongly worded statement before the end of the game and Mee revealed his embarrassment afterwards and felt it had affected the team's performance.

"It's a minority of our supporters - I know I speak for a massive part of our support who distance ourselves from anything like that.

"It definitely had a massive impact on us to see that in the sky.

"We are embarrassed that our name was in it, that they tried to attach it to our club - it doesn't belong anywhere near our club."

In a statement, Burnley said that the banner 'in no way represents' what the club stands for and that they will 'work fully with the authorities to identify those responsible and take appropriate action'.

"Burnley strongly condemns the actions of those responsible for the aircraft and offensive banner," the statement added.

"We wish to make it clear that those responsible are not welcome at Turf Moor.

"We apologise unreservedly to the Premier League, to Manchester City and to all those helping to promote Black Lives Matter.

"We are fully behind the Premier League's Black Lives Matter initiative and, in line with all other Premier League games undertaken since Project Restart, our players and football staff willingly took the knee at kick-off at Manchester City."

Both Burnley and City were wearing shirts with the players' names replaced with 'Black Lives Matter'.
Phil Foden and Riyad Mahrez both scored twice as City thrashed Burnley to ensure Liverpool will have to wait a little longer to wrap up the EPL title.

Three first-half goals saw City on their way to the most comfortable of wins at Etihad Stadium, with Foden's superb long-range strike breaking the deadlock before Mahrez's double just before the break.

The Algerian's fine solo effort made it 2-0 before he added another from the spot after Mee fouled Sergio Aguero, with the penalty being awarded by the video assistant referee.
It was all too easy for City against a Burnley side that did not name their full complement of substitutes.

Foden played a starring role in the rout, starting the move that saw Bernardo Silva tee up David Silva to make it 4-0 soon after the break, and then adding a fifth himself after Gabriel Jesus helped on a David Silva cross.

By then the evening was a stroll for Pep Guardiola's side, who are now 20 points behind the leaders with eight league games remaining.

If the defending champions had dropped points against the Clarets, a win for Liverpool against Crystal Palace at Anfield on Wednesday would have seen them officially take City's crown.

Instead Jurgen Klopp's side must beat the Eagles and then rely on City dropping points against Chelsea on Thursday if they are to clinch the title before they visit Etihad Stadium on July 2.

Cristiano Ronaldo scored as Juventus resumed their Italian League (Serie A) title defence with victory at mid-table Bologna on Monday.

Juve, who have won the past eight titles, are four points clear of Lazio, who visit Atalanta on Wednesday.
Ronaldo gave Juve the lead with a penalty after Matthijs de Ligt was fouled by Stefano Denswil.

Maurizio Sarri's side were in control in the second half and could have scored more with Bernardeschi hitting the post and Ronaldo having a goal ruled out for offside.

But their problems at left-back continued. Alex Sandro is injured, and Mattia de Sciglio pulled up during the game holding his hamstring. He was replaced by Danilo, who will now be suspended after picking up two yellow cards.
Juventus had played twice since the Italian season restarted following the coronavirus pandemic without scoring.
They drew 0-0 with AC Milan in the Coppa Italia semifinal before winning on penalties - and then lost the final to Napoli on spot-kicks after another goalless draw.