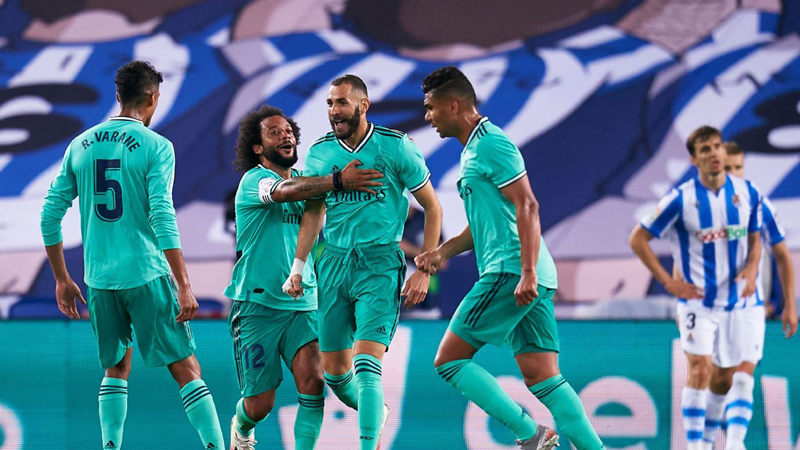 A hard-fought victory for Zinedine Zidane's men took them to the top of the Spanish League on Sunday. Elsewhere, Liverpool edged closer to the English Premier League title after a draw with Everton in a Merseyside derby

Spanish giants Real Madrid went to the top of Spanish League (La Liga) on Sunday, thanks to a hard-earned 2-1 victory against hosts Real Sociedad at the Anoeta Stadium.

Zinedine Zidane's side are level on points with Barcelona, who drew 0-0 with Sevilla on Friday, but go top because of their superior head-to-head record.

Sergio Ramos' penalty in the 50th minute after the lively Vinicius Jr was fouled gave the visitors the lead.
Karim Benzema doubled their advantage with 20 minutes to go before Mikel Merino's late strike set up a tense finale.

There was controversy when substitute Adnan Januzaj thought he had made it 1-1 with a strike from outside the area but it was ruled out for a Merino offside.

Their sense of grievance grew when moments later Benzema controlled a Federico Valverde cross with his shoulder before firing home. The goal stood after a video assistant referee (VAR) review for handball.

Madrid looked comfortable at that stage but Merino rifled a shot in via the underside of the crossbar with seven minutes left, after a cross from substitute Roberto Lopez, to keep the closing minutes interesting.

The visitors' biggest problem from the game came when Ramos was injured soon after his goal and needed an ice pack on his leg in the stands.

Madrid - who have only won one La Liga title since 2012 - are now eight victories away from winning the league.

Liverpool boss Jurgen Klopp praised 'world class' goalkeeper Alisson after his late save secured a point against Everton at the Goodison Park in the Merseyside derby on Sunday.

Dominic Calvert-Lewin's close-range flick was kept out by the Brazilian before Tom Davies' shot from the loose ball struck the post.

That was the closest either side came to scoring in a low-key Goodison Park encounter, which ended goalless.

"We should not take him [Alisson] for granted," said Klopp.

"Absolutely outstanding. That's what a world-class goalkeeper is - nothing to do for pretty much 90 minutes then he's there."

Liverpool now need five points to be sure of the English Premier League (EPL) title and can still clinch their first top-flight trophy in 30 years against Crystal Palace at Anfield on Wednesday - but only if Manchester City fail to beat Burnley at Etihad Stadium later on Monday.

Alisson also saved well from Brazilian compatriot Richarlison as a largely tame game, with the surreal atmosphere of a derby played behind closed doors, sprang to life.

The point earned means the celebratory champagne may be on ice a little longer for the Reds but it is only a matter of time, even days, before they are back at the peak of the domestic game by clinching that long-awaited title. "The point is one we deserve," added Klopp.

Chelsea boss Frank Lampard has backed Christian Pulisic to play a big role in the team's bid for a top-four finish in the EPL after the striker scored in Sunday's 2-1 win at Aston Villa.

The visitors controlled the first half but fell behind when Kepa failed to hold Anwar El Ghazi's shot and Kortney Hause was on hand to bundle in.

Lampard sent Pulisic on in the 55th minute and five minutes later the US international equalised when he lashed Cesar Azpilicueta's cross into the roof of the net. Olivier Giroud then sealed victory two minutes later.

The win means fourth-placed Chelsea restored their five-point advantage over Manchester United and Wolves, who are fifth and sixth respectively.

Aston Villa, meanwhile, remain in the relegation zone, one point from safety after taking one point from their first two games back following the resumption of the EPL.

Steve Bruce remains unconvinced that his Newcastle side have secured their EPL status despite an emphatic 3-0 victory over Sheffield United at St James' Park in London, UK, on Sunday, which moved them 11 points clear of the relegation zone.

The Magpies have 38 points with eight games remaining, and a win over Villa on Wednesday would all but secure safety.

Manager Bruce told BBC Radio 5 Live: "We can't take anything for granted because you never know. The points return with eight games to go... I can't be more pleased.

"If somebody said with eight games to go that we're two points behind Arsenal, I wouldn't quite believe it."
Allan Saint-Maximin, Matt Ritchie and Joelinton were the scorers for the winners.

Romelu Lukaku scored his 18th league goal of the Italian League season on Sunday as Inter Milan marked their return to Serie A action with a 2-1 win against Sampdoria at San Siro Stadium in Milan.

Former Manchester United striker Lukaku struck from ten yards in the tenth minute of the match and celebrated by taking a knee in support of the Black Lives Matter movement.

Lautaro Martinez made it 2-0 from Lukaku's cross soon after half-hour but Morten Thorsby pulled one back from close range in the 52nd minute.

The win means Inter are third with 57 points, six behind leaders Juventus.