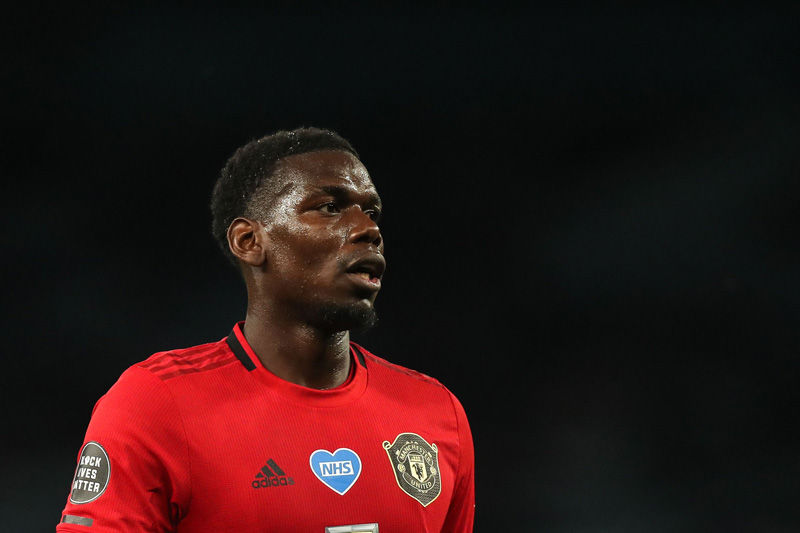 POGBA ONE OF THE BEST IN THE WORLD, SAYS SOLSKJAER

Manchester United manager Ole Gunnar Solskjaer feels Paul Pogba has the chance to enjoy a fresh start after making an impressive return as a second-half substitute in a 1-1 draw with Tottenham Hotspur in the English Premier League (EPL) atthe deserted Tottenham Hotspur Stadium in London, UK, on Friday.

Making his first appearance since December 26 due to a foot injury, Pogba was fouled by Eric Dier for the penalty that was converted by Bruno Fernandes to bring United level in the 81st minute.

The Frenchman demonstrated flashes of his ability during the cameo off the bench, while a potential midfield combination with January addition Fernandes showed early signs of promise.

Solskjaer praised the impact of his subs against Spurs but was particularly pleased for World Cup winner Pogba, 27, who has made just five EPL appearances in a 2019-20 season that has now resumed amid the coronavirus pandemic.

"I think the performance second half deserved a point, or three points. The players that came on I thought made a difference," Solskjaer said after the match

"Paul's one of the best in the world and it's great to have him back. It's good to give him minutes and he will work hard to get even fitter for the next time, to play even more.

"He's delighted to be back on the pitch. He's had a nine or ten-month injury nightmare. It's not like he's been out for ten months. He's almost come back, work hard, work hard, and then gets injured again.

"He was close to coming back before the lockdown and now finally he’s back playing. I'm sure everyone can see he has a great hunger for the game and is a very good footballer."

When asked if this is a fresh start for the World Cup winner at the club, the United boss replied: "I think so.

"Coming into this team, it's a different team to the one he left with his injury. Bruno has come in, the boys have got some momentum before the lockdown and we are more confident, even though for the first 45 minutes we doubted ourselves too much.

"The boys need to trust themselves more, trust their own fitness. They have worked so incredibly hard, and I think we saw second half that we were fit and can keep on running."

Fernandes has now been involved in six league goals since moving to Old Trafford, scoring three. Solskjaer admitted the key is to make sure both the Portuguese playmaker and Pogba can prosper in the same line-up.

"We are a club who want the best players in the world playing together," the Norwegian said on the duo.

"We just need to find the right balance, attacking and defending. That's always a key word when you're set a team up. I think today Paul showed he can play with Bruno, and Bruno has scored a penalty for us and got a goal."

Pogba completed 17 of his 18 passes, won the ball back four times and managed two blocks, with Solskjaer describing the performance as that of an 'allround midfielder'.

Earlier in the match, United keeper David de Gea was badly at fault when he failed to stop Steven Bergwijn's powerful 27th-minute drive in the cavernous spaces of the deserted Tottenham Hotspur Stadium - as the match was played behind closed doors.

De Gea made a measure of amends with a superb save from Son Heung-min shortly after his error, while Hugo Lloris made a magnificent flying save from Anthony Martial as United chased an equaliser.

The draw leave United in fifth place, four points ahead of Spurs.

Spurs will be bitterly disappointed to concede a goal so late on, and in such needless fashion, although it could have been worse when referee Jon Moss erroneously awarded that second penalty - before VAR put matters right.

Spurs manager Jose Mourinho will take some solace in the return of Harry Kane after hamstring surgery and Son after he broke his arm, as well as goalscorer Bergwijn.

Spurs, however, need wins, and this result leaves them in eighth place, six points behind fourth-placed Chelsea in the chase for Champions League places.

Later Mourinho, speaking to BBC Radio 5 live said: "I think difficult to find the word, I have to try to find a nice word - a strange penalty because the team was so compact, so well organised.

"The players did fantastic work defensively - they had two dangerous shots that Hugo Lloris saved and nothing else. Everything else was under control. I have to admit for the last 15 minutes I would love to have had Lucas Moura here, Dele Alli here. The last 15 minutes were difficult for us.

"Lucas and Dele are players we need and we could feel that today. when you look to their bench and then to ours the difference in attacking options. Hopefully they will be back for West Ham because in this moment it is very, very important to change players.

The result means second-placed Real Madrid could move level on points with Barcelona when they travel to Real Sociedad later on Sunday.

Lionel Messi's free-kick skimmed the bar in the first half but Barcelona were frustrated by Sevilla's defence at the Ramon Sanchez-Pizjuan Stadium in Spain on Friday evening.

Lucas Ocampos also hit the crossbar for the hosts before the break.

Sevilla sat deep, often playing with five at the back, and it proved effective as Barcelona saw lots of the ball but failed to create many clear-cut opportunities.

Messi's free-kick was the closest they came, and Luis Suarez' first-time strike almost sneaked in minutes before full-time, but Sevilla had bursts of attacking promise - Ocampos and Munir El Haddadi forcing two smart saves from Ter Stegen from close range in the first half.

Barcelona forward Antoine Griezmann came on as a substitute in the 76th minute in an attempt to find a winner but did not make an impact.

On-loan Real Madrid defender Sergio Reguilon had a great chance to score for Sevilla in stoppage time when the ball fell kindly for him in an unmarked position in the box but he hit it straight at Ter Stegen.

The league leaders next play Athletic Bilbao on Tuesday while Messi remains one off 700 career goals.

(With inputs from BBC and agencies)