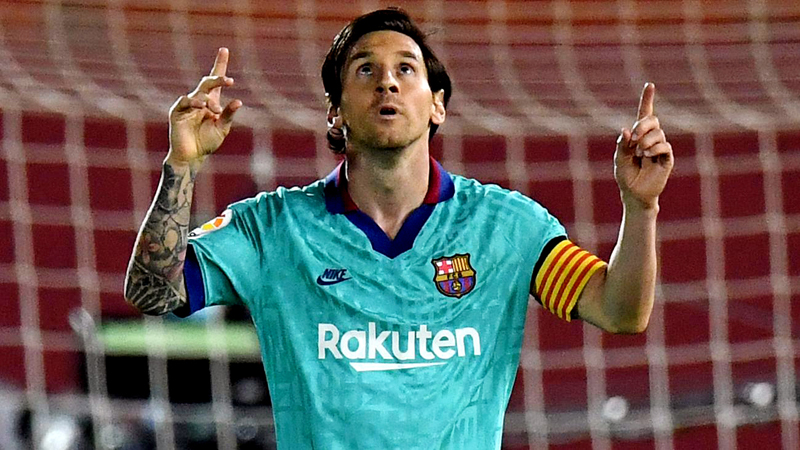 The star striker grabbed a goal as Spanish League's leaders posted a facile win over Real Mallorca on Saturday, making a perfect return to action after La Liga's three-month hiatus due to the COVID-19 pandemic. Elsewhere, Bayern Munich moved closer to the German League crown and Napoli entered the Italian Cup final

Spanish League leaders Barcelona scored 66 seconds into their return to action as star striker Lionel Messi bagged a goal to complete a comfortable 4-0 win against Real Mallorca at Mallorca in Spanish League on Saturday.

The top-flight Spanish League made its return after a three-month hiatus due to the COVID-19 pandemic.

Arturo Vidal headed the opener and former Middlesbrough striker Martin Braithwaite of Denmark added his first for the club before the break in the 37th minute.

Luis Suarez came off the bench to make his first appearance since early January and Jordi Alba made it 3-0 in the 79th minute.

Messi scored his 20th league goal of the season with a deflected strike in stoppage time. The Argentine star's milestone of 20 La Liga goals for a 12th straight season came when he collected a pass from Suarez and chopped inside that curled in via a slight deflection.

Barca are now five points clear at the top of the table with 61, and while Real will aim to trim the gap when they face Eibar later on Sunday.

Mallorca had plenty of possession without causing too much drama, something a pitch invader in a Messi Argentina shirt provided, somehow making his way on to the field despite the game being played without any fans in the stadium.

Bayern on verge of title

Champions-elect Bayern Munich found a late winner to see off Borussia Monchengladbach, 2-1, and move to within one win of another German League (Bundesliga) title on in Munich, Germany, Saturday.

Bayern were far from their best but Leon Goretzka nipped in to poke home the winner four minutes from time.

Hansi Flick's side will win the title for a record 30th time if they beat Werder Bremen on Tuesday.

Teenage striker Joshua Zirkzee had put Bayern ahead before Benjamin Pavard's own goal levelled the match.

Gladbach stay in the final Champions League place despite the late loss - but they have now won just one of their last five.

Earlier on Saturday, Borussia Dortmund's stoppage-time winner against Fortuna Dusseldorf meant that the title could not be secured this weekend, and that perhaps helped set the tone for a sluggish Bayern display.

Erling Braut Haaland's remarkable season continued as he came off the bench to score a 95th-minute winner for Dortmund at Dusseldorf.

Dortmund looked to be losing ground at the top of the Bundesliga after a frustrating display which saw a goal ruled out by VAR for handball. But Haaland, 19, came up with his 11th league goal in 12 appearances with a deft flicked header.

Dries Mertens became Napoli's record scorer after his goal edged out Inter Milan, 1-1-, at San Siro in Milan and sent the five-time winners into the Italian Cup (Coppa Italia) final on Saturday.

Leading 1-0 from the first leg, Napoli's advantage was quickly wiped out when Christian Eriksen scored direct from a corner.

Belgium forward Mertens made it 2-1 on aggregate after an assist from Lorenzo Insigne following a counter-attack.

It was his 122nd goal for Napoli, one more than Slovakia's Marek Hamsik.

Mertens, who is nicknamed 'Ciro' by Napoli fans to reflect his longstanding relationship with the club and city of Naples, is now seven goals clear of club legend Diego Maradona,

Napoli, who last won the competition in 2014, will meet Juventus in the final without any fans present on Wednesday at the Stadio Olimpico in Rome.

Fabian Ruiz's goal had given Napoli a semifinal first-leg lead in front of almost 60,000 fans in Milan on February 12.

There were no supporters present as Napoli finished off the job - despite conceding after two minutes.