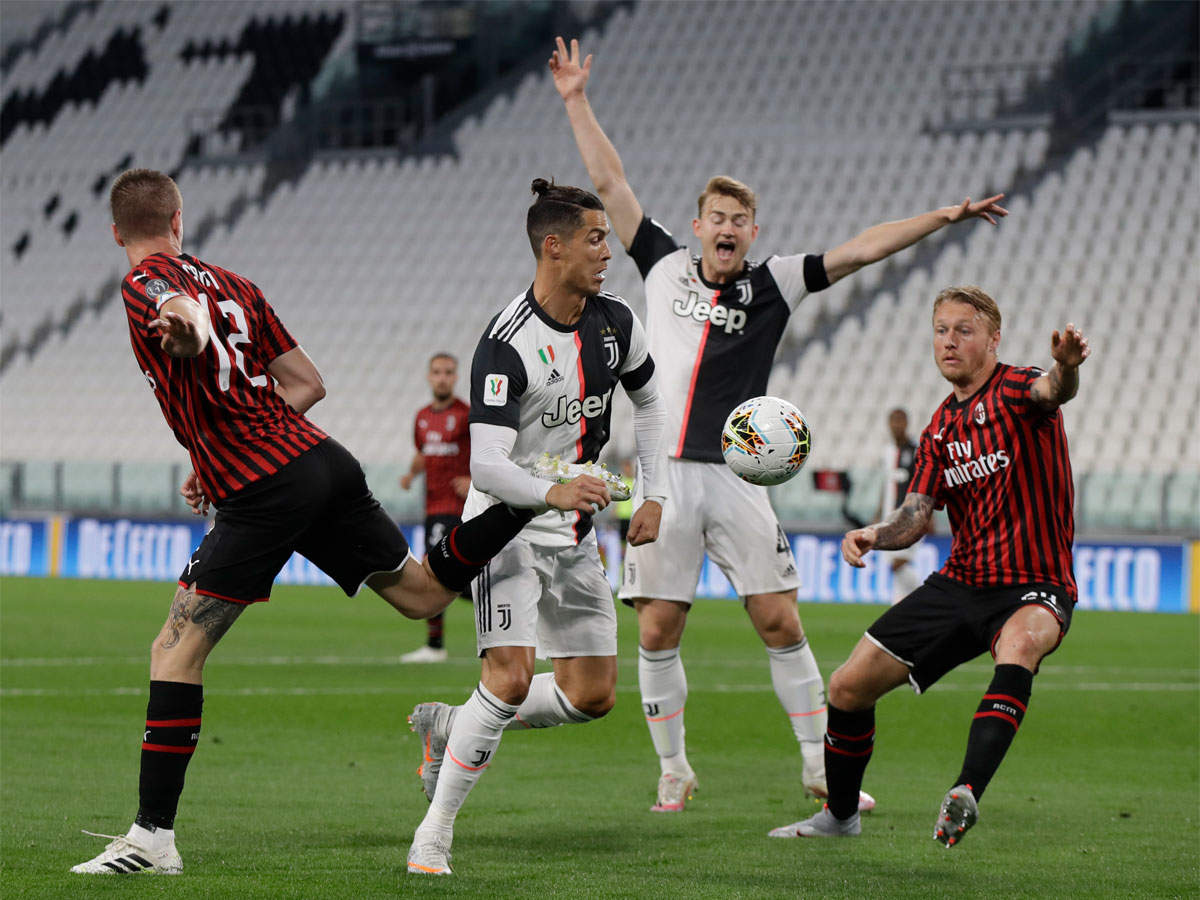 After drawing 1-1 in Milan on February 13, Juve could not find the net in a second-leg semifinal played behind closed doors at Juventus' 41,500-capacity ground in Turin.

Cristiano Ronaldo missed a penalty awarded for handball before Milan's Ante Rebic was sent off.

It followed the Croatia forward's 16th-minute foul on Danilo.

Juventus, under former Chelsea boss Maurizio Sarri, will meet either Inter Milan or Napoli in Wednesday's final in Rome. Napoli take a 1-0 lead into the second-leg.

After both teams emerged separately from the tunnel before the game, there was a minute's silence in memory of those who have died during the coronavirus pandemic, followed by applause for medical workers.

There was also a show of support for the Black Lives Matter movement: Milan’s warmup jerseys bore the words and Juventus wore ones with the words 'No racism'.

With no fans present, at times the game sounded like a training session but the hosts were presented with a great chance to take the lead on the night when they were awarded a penalty after a video assistant referee (VAR) review for handball.

However, Ronaldo's effort hit the post and moments later Rebic was dismissed for an ugly challenge on former Manchester City full-back Danilo.

Juventus did most of the pressing, Blaise Matuidi forcing a good save from Gianluigi Donnarumma, while Paulo Dybala also forced the keeper into a fine save towards the end.

Neverthless, Juventus coach Maurizio Sarri said he felt his team played 'the best they have this season' in the first 30 minutes.

“Starting again is hard and doing so without fans is an enormous difficulty,” Sarri added. “The physical condition can’t be anything but a medium-low level after a break of 70 days on the sofa, because this isn’t a summer break, it’s something much more devastating on a physical level and on a mental level.

“And then in moments of tiredness during the match you can’t count on the support of the fans to lift you up. But we managed to achieve our goal.”

Football was suspended in Italy on March 9 but Serie A returns on June 20 with leaders Juve one point clear of Lazio with 12 games remaining.

There was a heightened level of security outside Allianz Stadium but, on a drizzly night in Turin, there were a handful of fans to welcome the Juventus team bus, including one supporter who had driven from Bergamo, nearly 200km away.

“I wanted to see the team a bit, seeing as it’s been four months that we haven’t seen them. To give my support from outside,” a labourer Massimiliano Balduzzi said before leaving to watch the match in his hotel room.

“Unfortunately we can’t go in because of everything that’s happened. Let’s hope they open the stadium as soon as possible, I see it as being hard but we all need to have patience.”

New rules limit the maximum number of people in stadiums to 300, including the teams, officials and media. The absence of fans meant the players’ voices could clearly be heard and they echoed inside the cavernous stadium, as did the applause and jeers from the team benches, most noticeably for the penalty incident.