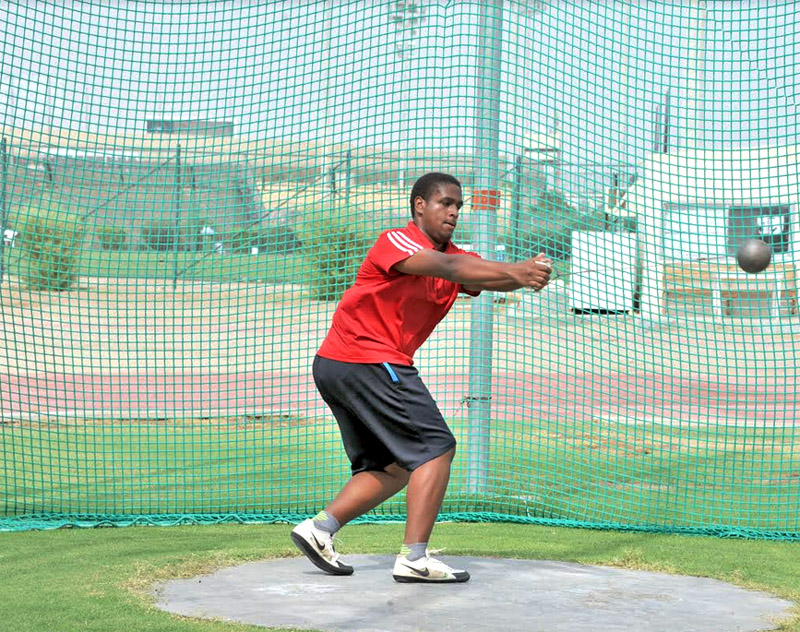 He is still in his teens but has set much bigger goals to achieve in future. The national youth hammer throw record-holder, Mubeen Rashid al Kindi, demonstrated a lot of potential when he won medals at the Arab and regional levels last year. And now, he has set his sights on qualifying and making an impressive debut in the 2022 Youth Olympic Games in Senegal

In athletics, one can always find sprinters by dozens, but finding a few hammer throwers will be difficult. Oman is no exception and when it comes to athletics, achievements of sprinters are reeled out quickly. Not any more, as Mubeen Rashid al Kindi, a talented teenaged hammer thrower, has arrived on the national and regional scene with a bang.

Last year, in July, Mubeen, who celebrated his 17th birthday a couple of weeks ago, set the national youth hammer throw record in style when he claimed a silver medal at the Arab Junior Athletics Championship in Tunis, Tunisia.

Coached by experienced Said al Harthy, who for the past two decades have been grooming the throwers in Oman, Mubeen set a new national record with a throw of 64.91m.

His immense potential has been backed by his medal-winning achievements and he proved that the silver at the Arab meet was no flash in the pan as he claimed a bronze at the West Asian Junior Championship in the Lebanese capital, Beirut, a month later.

However, his plans to pick up a few more medals and improve upon his personal best has been hampered with the lockdown imposed due to the coronavirus pandemic and the cancellation of a few championships.

“Sports around the world has been affected. But we need to find ways to try to make the most of all conditions,” Mubeen told Muscat Daily on Sunday.

The teenager said, “There were four major meets between March and July, and all of them have been cancelled. So, I am just hoping that the events later in the year are not cancelled like the Gymnasiade School Summer Games, in October in China, and the Arab Junior Championship in Tunis.

Notwithstanding the 'disappointment' of the cancellations, the Al Salam Private School's 12th grade student said, “I keep myself focused and have been in close touch with my coach, Said al Harthy. He has provided me a training schedule to keep myself in good shape and I do regular training for five-six days a week.”

Mubeen's support from the school has been encouraging and it is the very school where Oman woman Olympian Mazoon al Alawi, who competed at the 2016 Rio Olympics, graduated.

On his training at home, Mubeen thanked his father, Rashid, a former international athlete and a top sports administator now, and his brother Waheeb, for their support during exercises.

“There is a lot of emphasis on strength and power training and twice a week I focus on hammer techniques. I keep a good control of my diet, also because it is the holy month of Ramadan. I spend some time watching football games and reading the holy Quran,” said Mubeen.

Mubeen misses school and his classmates and hopes he can resume his last year in school in September. “It is a new experience, staying away from friends, but I and my family are strictly following the government restrictions on social distancing,” he said.

The youngster believes that he has it in him to improve upon his distance to a level where he can make a mark at the 2022 Youth Olympic Games (YOG) in Senegal. He said, “My primary goal is to achieve the YOG qualification standards and represent Oman in Senegal. I hope to make a mark there with my personal best.”

It may be mentioned that Oman won its first Olympic medal at the inaugural YOG, in Singapore in 2010, when rider Sultan al Tooqi won a silver in the team jumping event.

“I want to set a new Arab record and achieving a new personal best at the YOG in 2022 will be a dream come true for me. That will be the springboard I need to make it to the Paris 2024 Olympics. My ultimate dream is to earn laurels for my country at the 2028 Games in Los Angeles. It is an eight-year project and I am positive about it,” he said.

“But for now, with the guidance of my coach Said and his assistant Mahmood al Siyabi, along with some luck, I am hopeful of leaving an impact at the 2022 Senegal Youth Olympics,” he said as he signed off.