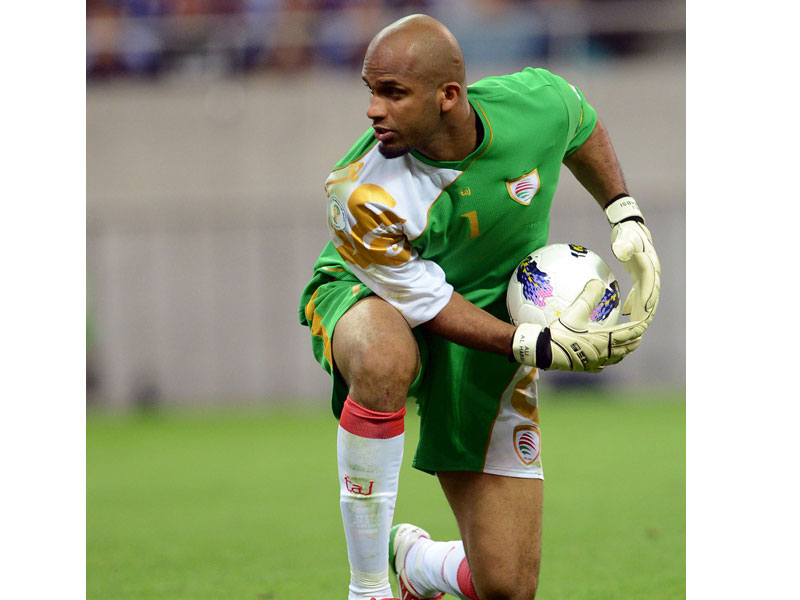 JOURNEY OF AN OMANI ASIAN ICON

He is considered to be the finest footballer Oman has ever produced. A legend, Ali al Habsi raised the profile of the country at the international level with his goalkeeping exploits. Following his retirement from the national team in January, Habsi continues to play for English Championship club West Bromwich Albion. A look back at an incredible journey of a firefighter from Mudhaibi to a FA Cup and Gulf Cup winner

He has many firsts to his credit. Not only was he the first Omani to play professional football in Europe in 2003, he also played a key role in Oman's first Gulf Cup title win in 2009. A legend, the 38 year old Ali al Habsi's dedication and determination has been praised by one and all and has made him one of the most-loved sportspersons of all time in the sultanate.

From Omani minnows Al Mudhaibi Club to English FA Cup winner with Wigan Athletic, Habsi's journey towards becoming the sultanate's finest player of all-time has now earned him yet another accolade.

On Thursday, Habsi was named in the prestigious Asian Icons list by the Asian Football Confederation (AFC) official website – www.the-afc.com.

Habsi, who currently plays for the English Championship side, West Bromwich Albion, (WBA) his fifth club in English football, retired from international football in January this year, after his stellar career took him from Oman to Norway, England and Saudi Arabia.

Born in Mudhaibi, Habsi began his career with his hometown club before making the step up with Salalah giants, Al Nasr, and winning the His Majesty's Cup in 2002.

It was during this period of his career that Habsi was spotted by quintessential journeyman footballerJohn Burridge [Budgie], who was working as a goalkeeping coach with the Oman national team.

“John Burridge made a big difference in my life. There might be hundreds of Ali al Habsi’s in Oman, but they didn’t have that one person who can help them and take them to another country and show the rest of the world we have these players,” said Habsi.

“Budgie saw the talent I had when I was 17 and told me it was the right time to go abroad. He is a legend in England, he played more than 700 games, and when he says he has a player he has the respect following his career in England."

Former Blackpool and Manchester City custodian Burridge identified an unearthed talent in the teen and fast-tracked Habsi up through the national team ranks to the first team and eventually, through his connections, on to trials in England.

“When I was 17 I got a two-week trial at Bolton Wanderers, thanks to Budgie,” said Habsi.

“When you have a target and hope for yourself to achieve something in the future you can do it.

“I had the skill, I just had to work hard and take the right things from the managers and people at the clubs and that’s what I did. I did not rush, I had a vision.

“Others players now want to achieve everything straight away and they can’t do that. When you are playing in the Middle East and you want to play in the top league, it is impossible. From my experience, you have to go step-by-step and obtain the experience."

“The three years in Norway was the right decision because if I had gone to England for those three years, I don’t think I would have made it. There were many reasons like work permit and experience that I had,” he said.

“Maybe I would go to the second division, but I think the Norwegian league is better than these lower leagues with many good teams.

Habsi said, “It was really hard for a few months in Norway but gradually I got used to the weather [from the heat of the Middle East to a northern European winter] and the way of training and in the middle of the season I got my chance and kicked on from there.”

Habsi would only make 18 appearances for Bolton due to the presence of first-choice goalkeeper Jussi Jaaskelainen and alternated with Ian Walker for the role as deputy, although those would include outings in the UEFA Cup during the 2007-08 season having earlier appeared in the qualifying rounds for Lyn Oslo.

“I knew it would be hard for me. Jussi was one of the best in the league at that time. I learned a lot from him and sometimes it is good to stay on the bench.”

With his club career on the rise, Habsi’s international prospects were also flourishing with appearances at the AFC Asian Cup in 2004 and 2007 before helping Oman win the Gulf Cup for the first time in Muscat in 2009.

In May 2013, Habsi arrived at Muscat International Airport to a rapturous welcome having been part of the Wigan squad which defied all odds to win the FA Cup with a 1-0 win over Manchester City at the start of May.

“Ali is a national hero – and it is his drive and determination to succeed that we want to see in every Omani,” said then Oman Football Association (OFA) chairman and present Oman Olympic Committee (OOC) chief Sayyid Khalid al Busaidi.

“Ali has shown what is possible when you combine talent with hard work and a professional and dedicated approach. He is a fine footballer but most of all he is a proud Omani and the country loves him for that.”

Habsi was an unused substitute for the showpiece final despite having featured in the semifinal at Wembley a month earlier as Wigan recorded a 2-0 win over Millwall.

But any thoughts of disappointment after missing out on the final were soon forgotten as the sight of a beaming Habsi with the famous trophy in one hand and his national flag clutched in the other confirmed the historic achievement for the former fireman.

“I am so happy with the FA Cup win. I am so proud because I was part of the team,” said Habsi.

“In football it is not about one player, the group of players is part of the trophy. I played the semifinal, but I had not played for the last ten games in the league or the cup and it was really hard with my injury.”

Habsi’s celebrated homecoming not only marked a significant moment for Omani football, but also was a reminder of just how far he had come having worked as a part-time fireman at Muscat International Airport as a teenager on the fringes of a third division team in the amateur domestic scene as well as the Oman U17 side.

“Before I started as a professional I worked for one year in Seeb Airport as a fireman. Even looking back for me it’s an amazing story," said Habsi.

Success away from home

Habsi eventually joined Wigan Athletic, initially on a season-long loan in 2010, and after a successful season where he was named the club’s Player of the Year, the move became permanent in July 2011.

The move to Wigan brought with it new challenges as Habsi had to adapt to the contrasting style of the long ball game utilised by then Bolton manager Sam Allardyce compared with the more cultivated passing style preferred at Wigan under Roberto Martinez.

Habsi’s stock continued to rise at Wigan with increased transfer speculation, although he was forced to endure an injury hit 2012-13 season and was used sparingly during the English Premier League run-in as the Latics were eventually relegated despite their FA Cup success.

The surgery was timed in order to allow Habsi to be fit for the start of the upcoming season for Wigan, although that had a knock on effect on his availability for Oman at the end of the FIFA World Cup qualifiers.

But his time on the sidelines, though, allowed Habsi to turn his attention to other avenues while back home in Oman, which included his work as co-founder of a non-profit road safety organisation, Safety First and later in 2016 launching of an academy- Al Habsi Football School.

Following his stint at Wigan, he spent a month on loan at Brighton and Hove Albion before signing permanently in the summer of 2015 for Reading, where he spent two seasons before moving back to Asia through Saudi Arabia’s Al Hilal, where he won a Saudi Pro League title in 2018, and a Saudi Super Cup months later.

In the summer of 2019, he moved back to England on a free transfer deal to West Bromwich Albion (WBA), where he remains till today.

With his contract expiring on June 30, there isuncertainity on Habsi's future association with WBA but one thing is sure, the legendary tale of Habsi's success is here to stay in Oman.