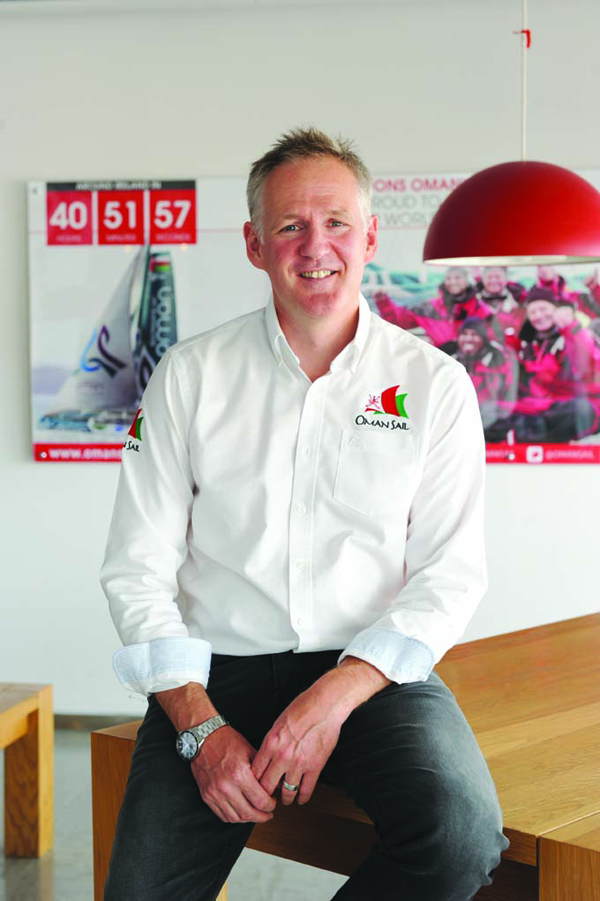 'Proud to have served Oman'

Newly-appointed World Sailing Chief Executive Officer David Graham talks about his journey as Oman Sail CEO for more than a decade. During his tenure the sultanate gained prominence on the world sailing map as a key destination for hosting world-class events and there were also notable achievements by Omani sailors

For the past decade or more, he has been at the helm of Oman Sail and has steered it to achieve many milestones that has put Oman as a key destination on the map of world sailing.

A month after stepping down as the CEO of Oman Sail, David Graham, has once again put the sultanate in the spotlight after he was appointed as the new chief executive officer of World Sailing, the governing body of sailing, last week.

In his exclusive remarks to Muscat Daily, the first interview after being named World Sailing CEO, Graham spoke about how he led Oman Sail

on a stellar journey and began with saying, “I am proud to have served in Oman and happy that I am leaving the organisation in the hands of a strong and efficient team of Omani professionals.”

During Graham's tenure, Oman Sail has grown multiple times since it began in 2008 and has been one of the finest examples in the region for not just its achievements in organising many world championships in the sultanate but also managing to attract thousands of children to sailing and setting a template for a private-public partnership.

“Undoubtedly, the proudest moment for me is that the organisation is in the hands of an exceptional team of Omani professionals, who are supported by an encouraging number of world-class sailors.

“With nearly 93 per cent of Omanisation having been achieved, Oman Sail has been in the frontline to promote the long-lasting Omani values and ethics over the years. It has been like working with my own family and it is gut-wrenching to leave this country and a family.”

Graham, who has two decades of experience in the sailing industry, has worked in sales, events, coaching and sponsorship, including CEO and Managing Director roles.

At Oman Sail, he led a dedicated team that used sport as a tool to contribute to the development of the Omani people.

Oman Sail was established in 2008 with the blessing of the late His Majesty Sultan Qaboos al Said to rekindle Oman’s maritime heritage, promote the nation around the world through sailing, and provide long-term learning opportunities for the youth of Oman.

Graham said, “We have achieved a lot during the past decade and the respect of Oman Sail at the global stage and the laurels earned by the Omani sailors is a matter of pride.

“Oman Sail has today become a major destination for sailing championships, having organised some of the biggest regattas successfully.”

Among the many top events included the America’s Cup World Series in 2016, five Extreme Sailing Series championships, many world championships, and, perhaps most importantly, the establishment of four sailing schools which have taught more than 20,000 Omani children to sail.

Graham said, “Today Oman Sail can boast of 50 highly-qualified Omani instructors and an equally-good Omani race-management team that has the ability to organise Olympic qualifiers and world-class events. I am sure under an energetic CEO Dr Khamis al Jabri along with Rashid al Kindi and Khamis al Anbouri (both directors), the organisation is in safe hands.

“Over the years, Oman Sail has proved to all that the harmonious way of working with various stakeholders has been the basis of our success, thanks to the strong backing of the board of directors headed by H E Maitha al Mahrouqi, the chairperson.”

Graham, who was last year awarded World Sailing’s President’s Development Award, said 'it was a very difficult decision to leave Oman' but will always cherish the time spent here.

“Oman will always a special place in my heart and I will be keen to support Oman Sail in whatever way in my new role. I am proud of the strong legacy I am leaving.”

The UK-born former sailor, Graham praised the efforts of the Oman Olympic Committee (OOC) chairman, Sayyid Khalid al Busaidi, for the support and backing to the Olympic sailing movement. “With the Omani sailors knocking the doors of the maiden Olympic berth, the close coordination between the OOC and Oman Sail along with the vision of Sayyid Khalid augurs a bright future for the sultanate.”

Graham admitted that the new role as the CEO of World Sailing is full of challenges given the current situation with the world affected by the COVID-19 pandemic.

“I am going to take over my new role on July 13 but we all are aware that not just sailing but global sports has been badly affected. The massive halt has massive ramifications to the sports industry but it is encouraging to see that the industry is pulling together. I am sure we will come out stronger after the pandemic is brought under control. There are challenges ahead but as a passionate sailor, I love to take them on.

“I hope to be successful with the support of various stakeholders and board members as we strive to make World Sailing a more stronger organisation in future.”

With the COVID-19 travel restrictions in place in Oman and UK, Graham is likely to leave for his new assignment in London only by next month. “In a way, I have more time to spend in this beautiful country, which has showered with so much affection. I will miss Oman,” said the new World Sailing CEO as he signed off.