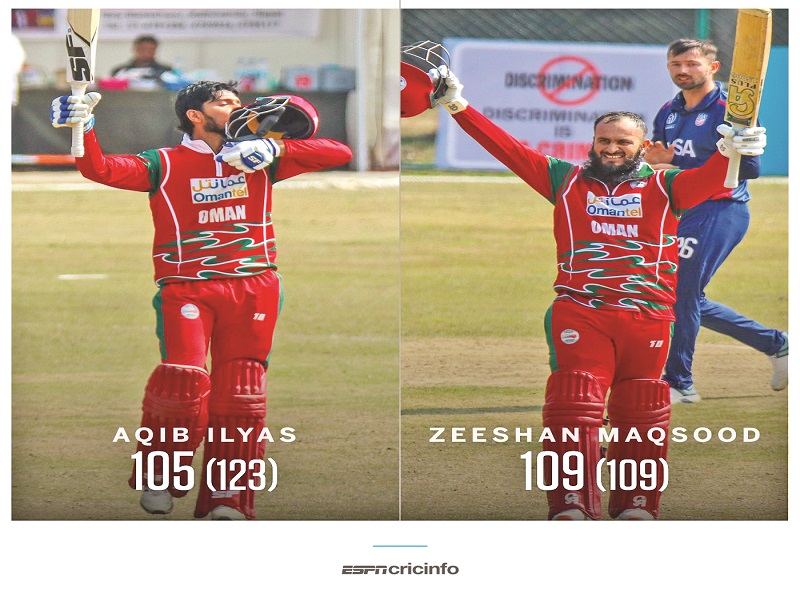 Oman’s juggernaut rolled on at the Tribhuvan University Stadium in Kirtipur as they pulverised US by 92 runs for their fourth successive victory in the ongoing tri-series of the ICC Men’s Cricket World Cup (CWC) League Two on Tuesday.

The victory for Duleep Mendis’ men concluded their campaign in Nepal with a clean sheet and the all-win record saw Team Red stay on top of the seven-team league with 16 points from ten games.

It was also the first time in the CWC League Two that any team has made a clean sweep in a tri-series. Oman beat Nepal twice and also defeated US on two occasions.

The vanquished US have 12 points but have played a game more than Oman and they will conclude the tri-series with a match against the hosts Nepal on Wednesday. For the second consecutive match, Oman’s run-machine, Aqib Ilyas, hammered a century (105) and this time was joined by his captain, Zeeshan Maqsood (109) as the duo sent the US bowlers on a leather hunt in a 216-run third wicket partnership. This was after Oman was reduced to 31 for two in 11 overs. Ilyas brought up his half-century off 65 balls in the 28th while Maqsood reached his fifty off 57 balls in the 31st over.

Maqsood reached his maiden ODI century off 103 balls in the 45th over off Ian Holland while Ilyas completed his ton in 118 balls. Ilyas had made history on Sunday when he became the first player from Oman to slam an ODI century, scoring against Nepal. And as if both did not have enough with the bat, Ilyas and Maqsood then excelled with the ball to share five wickets with Ilyas capturing three for 14 and Maqsood picking two for 33.

The duo assisted pacer Bilal Khan, who celebrated ESPNcricinfo honour of best Associate bowler of 2019, with a searing spell of three for 24 as US was bowled out for 184 in 39.1 overs. Nisarg Patel’s counter-attack innings of 52 off 36 and Aaron Jones unbeaten 47 were the only knocks of resistance against a disciplined Oman attack.

Ilyas’ allround display also made him join an illustrious ODI club of eight players who have scored a century and bagged three wickets or more in the same match multiple times with Ilyas achieving it in consecutive ODIs, having hit a ton and picked four wickets against Nepal on Sunday. The other stars in the club include Viv Richards, Sanath Jayasuriya, Shakib al Hasan, Tillakaratne Dilshan, Shoaib Malik, Chris Gayle and Nathan Astle.

For Oman, the Maqsood-Ilyas pair scored a total of 420 runs and took 17 wickets between them in the tri-series. Ilyas was Oman’s highest run-scorer with 302 runs and also the highest wicket-taker with ten wickets. The win on Tuesday also continued Oman’s domination over the US as it was the eighth straight time Oman won.