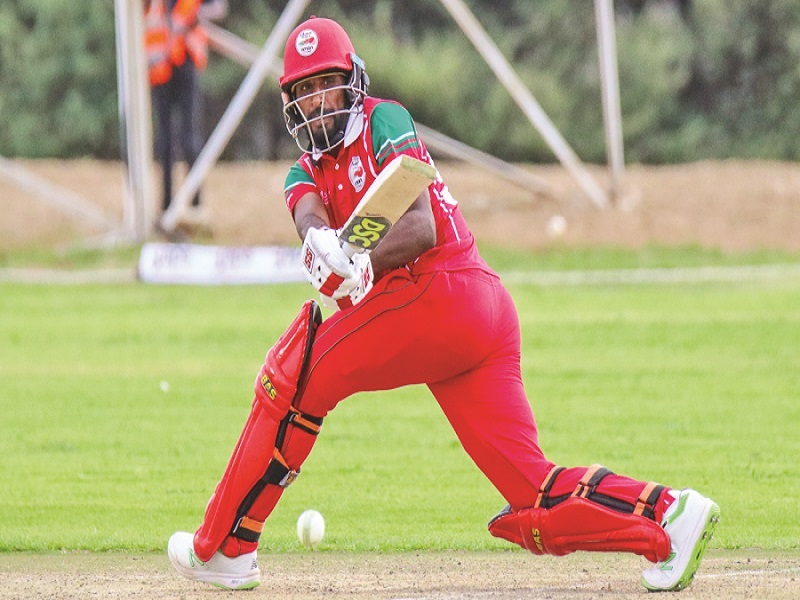 Oman bowlers came up with a splendid performance to defend 197 as Duleep Mendis' men defeated hosts Nepal by 18 runs in the ICC Cricket World Cup League 2 tri-series at the Tribhuvan University ground in Kirtipur on Wednesday.

Oman managed to put up a challenging total after being put to bat, thanks to an unbeaten 69 from Mohammad Nadeem. His crucial innings off 96 balls included five boundaries and two sixes. Nepal seamer Karan KC seized the early initiative removing both the openers - Jatinder Singh and Khawar Ali - inside seven overs.

Left-arm spinner Sushan Bhari (3-14) struck with the prized scalps of skipper Zeeshan Maqsood (20) and Suraj Kumar (duck) in a space of three deliveries as Oman was left struggling at 57 for five with Aqib Ilyas run out. Bhari also ended Oman's biggest partnership of 60 between Nadeem and Sandeep Goud (33) as he had the latter stumped. Goud's 72-ball 33 included three fours and a six.

Nadeem also shared 42 runs for the eighth wicket with Naseem Khushi who played an 18-ball cameo of 28 that included two sixes and as many fours. Karan was the most successful bowler with four for 47. Defending the ordinary total, Oman pacers - Bilal Khan and Kaleemullah – gave the initial breakthrough to put the hosts on backfoot with the total reading four for two.

A 62-run partnership between Sharad Vesawkar (55) and Dipendra Singh Airee (36) resurrected the innings before it was broken by Nadeem (1-10), who was later named man-ofthe- match. Oman spinners - Zeeshan Maqsood (3-30) and Khawar Ali – picked wickets at regular intervals as Nepal were reduced to 73-5. Sandeep Lamichhane’s late charge (28) reignited Nepal's hopes as he shared a 38-run stand for the eighth wicket with Vesawkar. But when Aqib Ilyas bowled Vesawkar round the legs, Nepal's last hope perished.

He scored a 108-ball 55 with five boundaries. Khan and Kaleemullah shared two more dismissals to bowl out the home team for 179 in 46.5 overs. Oman will meet US in the next game of the tri-series on Thursday.