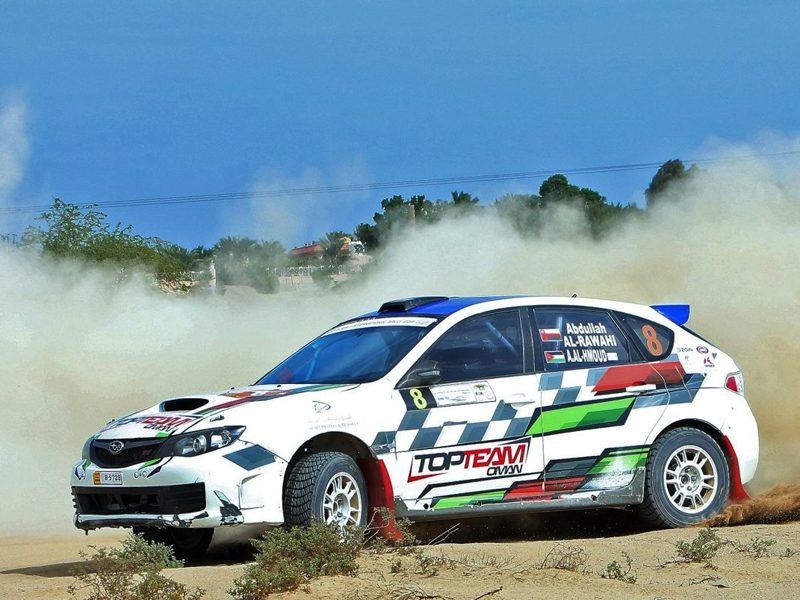 Rawahi all set for R5 debut

A day after he turned 23,  Abdullah al Rawahi is set to  challenge new frontiers as he will become the first Omani to  compete in R5 category of the FIA-Middle East Rally Championship (MERC) on Thursday.

Rawahi will take on Qatar’s 15-time MERC winner Nasser Saleh al Attiyah and Nasser Khalifa al Attiyah in the R5 class during the three-day Oman International Rally, the first round of the MERC, which begins at  the Oman Automobile  Association (OAA) premises on Thursday afternoon.

R5 cars are based on production cars and feature a 1600cc turbocharged petrol engine and are a step down from the World Rally Cars (WRC).  In his remarks to Muscat Daily, Rawahi expressed confidence of a ‘good showing’ at home in the R5 class.

“It is a big switch and it is my debut in the class. But it suits my racing style and I am hopeful of a good show at home,” said Rawahi, who moved into rallying three years after a successful go-karting career.

“Having participated in Group N for the past couple of years, I did face problems in completing the rallies, either due to my  mistakes or mechanical or  technical issues with my car. We have been racing in old cars and at times they are not good enough. So we are trying out R5 for the first time at home. “The car suits me as it is a proper rally car and I am looking forward to a successful debut.”

Rawahi will compete in R5 only at the Oman International Rally though the 23 year old  intends to take part in all the rounds of the MERC this season. “We will see how it goes here and based on my results and  corporate support, we will decide to continue with R5 or return to Group N in the remaining rounds of the MERC,” said Rawahi, who will have Jordan’s Ata al Hmoud as his co-driver. The Omani was excited to compete with the Arab rallying legend and former world champion Nasser Saleh al Attiyah, who will be driving a Volkswagen Polo GTI R5.

He said, “I am so lucky and honoured to get an  opportunity to compete against him. He has put in more years in rallying than my age. I am looking forward to learning a lot while competing against him.” Rawahi will be driving a Ford Fiesta R5 car, the car that Nasser Khalifa will also compete in.

“Having Nasser al Attiyah among us means a high  benchmark. It is always a  learning lesson to chase such high standards,” said Rawahi. The young rally driver will be joined by more local drivers in the rally with the rest of Omanis competing in the Group N class.

Rawahi welcomed the return of Oman International Rally after a gap of four years and said that the sultanate provides a perfect terrain and landscape for rallying. “I hope for a good start and hopefully I can continue my  season with participations in the rest of the MERC rounds and few local rallies in Oman and Jordan,” he said.