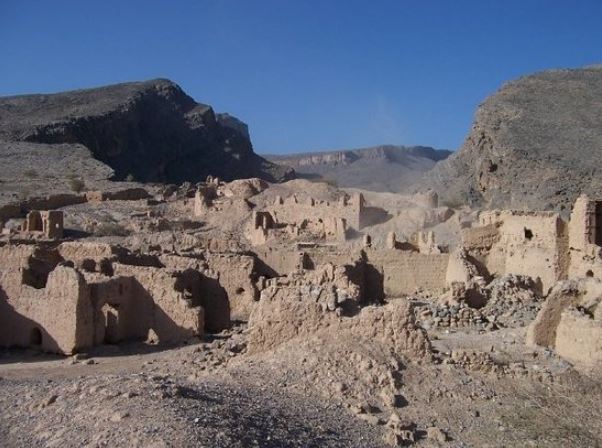 Once again with beaches and parks closed my friend Nicole and I got in the car for a little road trip to check out some history in Oman.

Our first stop was Tanuf Ruins; I tried not to look at photos before going, which meant it was a real surprise when we pulled up. It wasn’t just one or two little buildings but a full-fledged village. Despite being in my late 20’s I pretended that these were my grounds and acted out what each room’s purpose was. Surprisingly we were the only people there which meant we could appreciate the views from the top of the hill and take photos without being disturbed.

According to Google Maps there was a wadi just around the corner, however due to the time of year, the water had dried up and our visit just resulted in me cooing over all the goats that were enjoying the shade under the trees.

After a quick spray of deodorant, we were back in the car en route to our second stop Birkat al Mouz Ruins. This is clearly more of a tourist spot as there is a beautiful café with a roof top view that looks over the ruins. Now, these ruins aren’t that old and only in the 19th century were they deserted. I felt like we had been transported to Venice or Rome with the beautiful water ways and grand statures. I would say this isn’t a place to visit for families with children as there are some rather dodgy and rocky steps to be taken in order to get to the top of the ruins and take in the view. But if you’re able to scramble to the top, it’s most certainly worth it to see all of the landscape together.

I recommend visiting these spots early as we left at around 2pm to head back to Muscat as it was VERY hot [10°C hotter than the city] so I’m not going to lie we were in desperate need of a shower… Attractive I know!