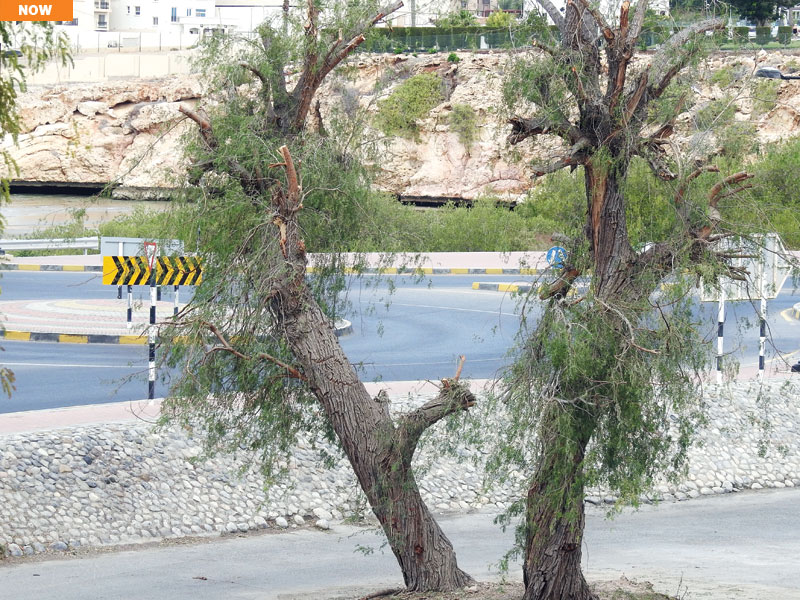 The ‘death’ of Ghaf trees in Qurm

When in December 2018 attempts were made to transfer the 250 years old twin Ghaf trees (Prosopsis cineraria) in front of what is now a hotel, The Southern Seasons in Qurm, to near the nature reserve, they were thwarted by two main arguments, a scientific and an emotional one.

The scientific argument came from two main sources, an expert on Ghaf at the Botanical Garden and another at the Ministry of Environment and Climate Affairs. Both experts, after visiting the site and seeing the trees, declared that there was no way the twin trees of this age and size could successfully be transported and replanted on another plot. In the past, they said, attempts had been made in Sohar to transfer 70 much younger (average age ten years) Ghaf trees from one plot to another very close by but all 70 trees perished. Any attempt to do so would surely kill this massive and old specimen.

The emotional argument started at a personal level. As an Omani living in a purely residential area in Qurm for almost 37 years next to such a magnificent and indigenous Omani tree is an honour and a privilege. Very soon and once it became public knowledge of what was about to happen to those trees, people started writing on social media bemoaning the folly of that action. Many remembered their childhood and would regale stories of coming to these twin trees when they were young and playing around them while some remembered picnicking underneath their shade.

Perhaps because of the pressure and maybe advice from his own experts, the Minister of Environment H E Mohammed bin Salim al Toobi came personally to see them and the following day issued a Ministerial Decision, which said that ‘The Minister orders the stoppage of this experiment of transporting the two old trees.’

He also decreed that all indigenous old trees must be registered and protected from development starting immediately within the capital area and finally covering the country. This step by the ministry was hailed and many an Omani heaved a sigh of relief. They had all participated in saving a Grand Old Ghaf.

On Friday, the 8th of November 2019 and on the onset of a long week-end holiday, sometime around 11.30am when people were heading towards mosques for Friday prayers, the twin Ghaf trees were attacked with chainsaws and within a few hours most of their magnificent branches were lying in the car park waiting for lorries to come and take them away. This morning the car park facing my home was a sad sight to see.

The way the trees were hacked clearly indicates that this is not pruning done to beautify them. They are very obviously being prepared to be removed and the branches cut in such a way that would allow a relatively easy transport of the main trunks. No thought has gone for the care of the roots. When healthy, those trees were almost 10m tall, so the roots are almost 10m deep. How much of those roots will be chopped off during transportation and how much needed to allow it to survive the replanting is only known by those who will do it?

It would seem that since January 5, 2019 advocates for the removal of these trees have come across a new technology that would permit them to successfully remove a 250 year old tree now almost bereft of most of its branches and replant it a kilometre away. It begs the question why? If it is to advance science then are we the country qualified to do so? We do not have enough very old trees in the country to have the luxury of experimenting on such a scale. If however, as seems to be the case, it is to provide more parking space in a congested residential area then that makes a lot of sense. A lot of heartache could have been avoided if the intention would have been made public from the outset!

In Bahrain, there is a 450 year old Ghaf tree called the ‘Tree of Life’, which attracts some 65,000 people annually. It is of course protected and now by Unesco. Our Qurm one may not have qualified for such an accolade but surely it did not deserve the fate that has been served it. Instead of being replanted a kilometre away where it will most certainly die in the process, it should have been allowed to rest in peace, have a bench seating around its girth and let visitors sit underneath it and sip coffee and eat dates as they had been doing over all these years in the past. Sadly, it will now be a memory and a painful one for those like us who have been seeing it for most of our adult lives.