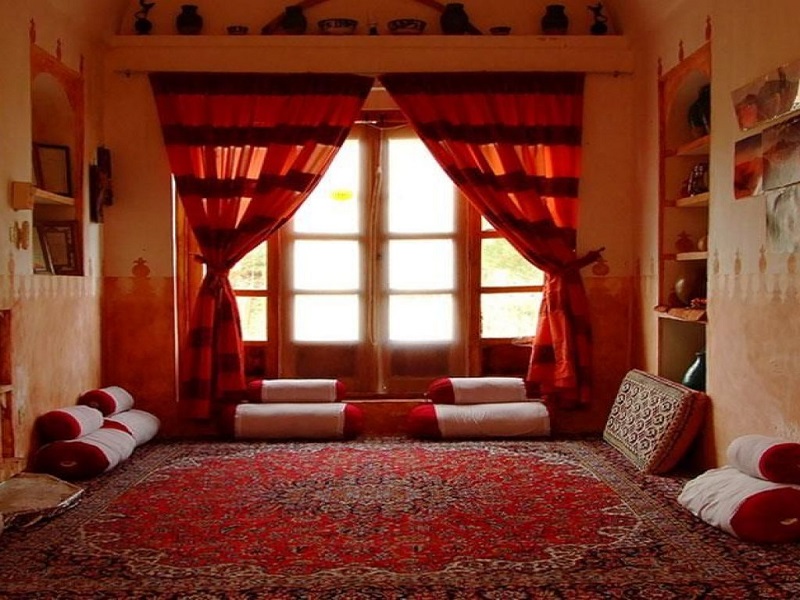 With thousand years behind it, Persia is well known for its history, architecture, carpets, etc, but the Western world has not recorded the cuisine history of this great nation. Food was an art in ancient Persia, which provided enjoyment to both the body and mind, and many poets and historians relate indirectly to this art. Composed of many provinces and historical backgrounds, each region of today’s Iran had its own special dishes.

Food happened and still does around a napkin; most of the time laid over a rug, or a table and the main dishes are served at the centre and smaller ones surrounding the main one. The traditional house in Iran has no furniture. People sit on the ground with a carpet and cushions to rest on.

Persian cuisine consists mainly of rice, vegetables and chicken or beef meat. When the rice is plain it is called chelow, and when mixed with meat, vegetables, etc, it is called polow.The food is never spicy and the art of Persian cuisine lies in the development of taste whilst eating. At the beginning, the food has a certain taste, which gradually develops into other tastes. This phenomena comes from the use of a variety of spices and vegetables, such as thyme, basil, dill, parsley, coriander, dried lime, cardamom, turmeric, mint, Greek fennel, kangar, sumac, etc.

Saffron plays an important role in Persian food. Planted in the north East of Iran, the plant crocus requires special climate. Several countries produce this flower, but Iranian saffron is known as being the best by far. Its price per kilogram is higher than gold.

Collecting strands of this saffron requires a mask, because its smell can cause death from unstoppable laughter. Over 90 per cent of the world’s production is used by the pharmaceutical industry in the preparation of anti-depressants.

When people are received as guests, the tradition is to decorate the rice dish with some saffron juice or sauce, to make the guest smile and be happy. In some restaurants, they serve a small aperitif drink, made of saffron to place the client in a welcoming mood. This is the case in the Shandiz restaurant near InterContinental Muscat. Shandiz is an area, in the northeast of Iran, famous for its meat quality.

Several types of bread exist in Iran, such as taftoon (thin flat bread), sangak (small gravel stones) and barbari (thicker and longer) each cooked differently. Usually, before eating the main dish, and in order to whet the appetite, a bread piece is taken, folded and served with mint leaves, coriander, goat cheese and walnuts. The Iranian food is usually cooked in large quantities, because they feel taste of re-heated food is always better. People drink usually fresh water, sometimes with an added spoon of rosewater, or yoghurt, often with a spoon of mint leaves. But the main drink is after the meal and consists of tea.

Tea was imported to Iran about 150 years ago and then produced in northern Iran. Some 70 years ago, when sugar was imported from Russia and when suddenly the relations between the two countries had gone sour, an Ayatollah issued a fatwa saying that it was haram to drink tea with sugar.

Sometime later, when the relations improved, the Ayatollah was embarrassed and it was said that putting sugar in tea was haram, but putting sugar in your mouth and then drinking tea was halal. Hence, this way of drinking tea became known as an Iranian tradition. To summarise, Iranian cuisine is not just to fulfil a need, but a refined art of living where the role of each ingredient is essential for health, well-being and taste. Around 1,050 years ago, Ibn Sina, the father of medicine had already mentioned the way of using herbs in daily cuisine.