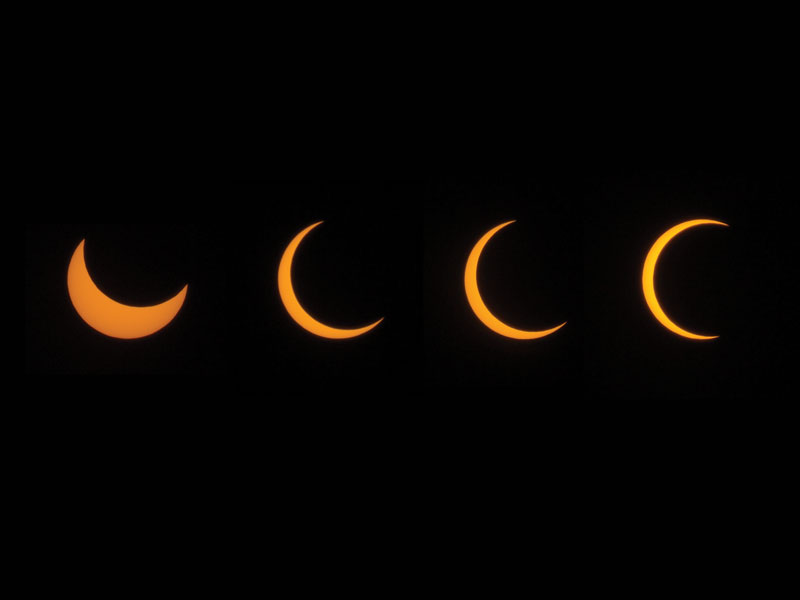 If you missed out on the annular solar eclipse on Thursday, then you will have to wait for another 44 years as it is slated to happen again on February 28, 2063. And the path of the eclipse shadow will not fall on Oman. Keeping this in mind hundreds of enthusiasts positioned themselves at strategic locations in many parts of Oman and watched the annular solar eclipse.

“I did a lot of research and even ordered eclipse shades from Amazon. Unfortunately they did not work. I  experimented with them on regular days. I wanted to see the whole transition. I did not have money to invest in a big telescope. So, what I did was made my own solar eclipse projector. I saw the transition. It was so much fun,” said Mohammed Abdul, one such enthusiast who was in Seeb in Muscat to see the eclipse.

In Muscat and in many parts of Oman several organisations marked out places from where to watch the formation of the eclipse. Aiman Yousuf al Ghazali, an engineer, said, “We had our preparations in advance. We checked apps and websites to know where it can be viewed best and the wilayat of Adam was the best location for us. We visited the site many a times before to be sure that we are at the best spot to watch it.

“My friends and I stayed at a hill top like we do when we go on camping. We had positioned our instruments and cameras  accordingly. Enthusiasts in Oman had waited for this moment for years. I didn’t want to let go off this opportunity. My photos on Instagram have been liked by many. Oman will witness a solar eclipse again on June 21, 2020. It will be a partial solar eclipse and we are gearing up for that too.”

Mohammed al Gharibi, a content creator, said, “It was an international event. People have come from different parts of the country and abroad. People in Oman can see two solar eclipses in consecutive years – one annular and the other partial. It does not happen every time.

“It is one of the things you do not want to miss out. We went to Adam. We went to the top-most location to get the best view. I went to the top of a mountain so that my videos would be nice. We had practised a lot before the D-Day.”

Some in Seeb were found reading from the Q’uran as the eclipse occurred.

Asila, a student of grade three, was quite enthusiastic to see the eclipse occur. “The view is awesome. It is one-of-its-kind. I have read about solar eclipse in books and I am lucky to see it really happening,” she said.

The eclipse started before sunrise at 6.31am, peaked at 7.39am, and continued until 8.58am. The full annular eclipse lasted for approximately three minutes in the areas located in the transit path, which are the governorates of Dhahirah, Dakhliyah, Al Wusta and South Sharqiyah, while the rest of the sultanate’s governorates witnessed only a partial eclipse of the sun.

A solar eclipse occurs when the Moon passes between Earth and the Sun, thereby totally or partly obscuring the image of the Sun for a viewer on Earth.

An annular solar eclipse happens when the Moon covers the Sun’s centre, leaving the Sun’s visible outer edges to form a ‘ring of fire’ or annulus around the Moon.

Abdul Wahab al Busaidi, head of observatory, Oman Astronomical Society (OAS), said, “Earlier travel was not easy so if an eclipse was visible best from a particular area you were lucky to see it. Now travelling is easy, so a lot of tourists were here from different countries to view it in Ras al Ruwais. We reached the spot on December 25.”

He added, “OAS had set up tents and other facilities to welcome the enthusiasts. All set up their respective telescopes and cameras. The sky was cloudy but the eclipse appeared intermittently. The crowd would cheer each time the sun peeped from between the clouds. There were 22 locations set up in Oman to view eclipse and all received good response.”