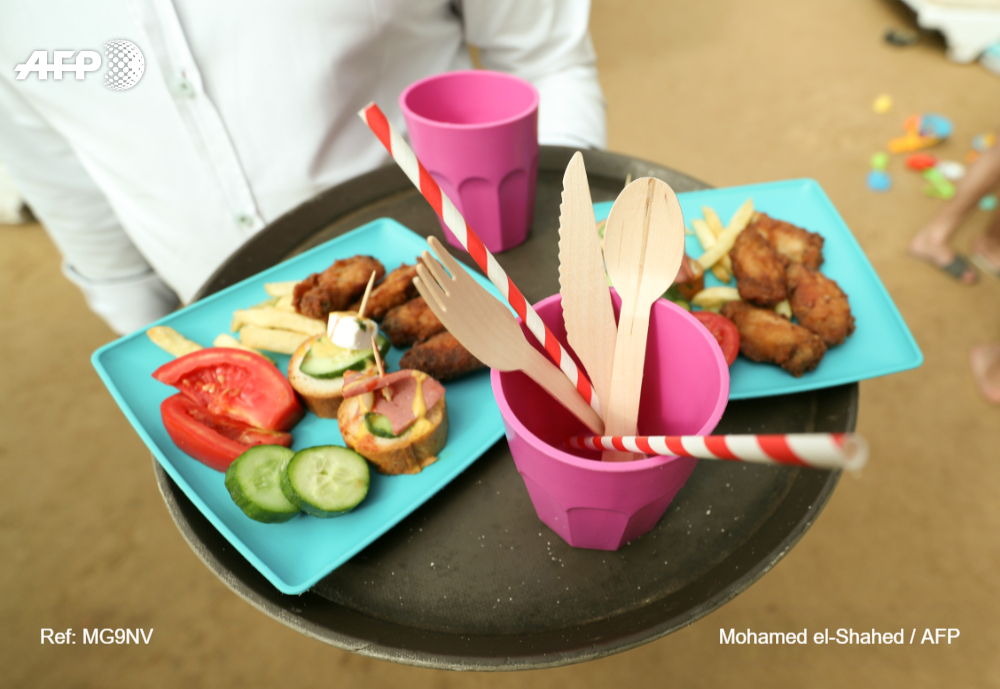 Combing the Red Sea beach at an Egyptian luxury resort, workers find bagfuls of plastic garbage -- but the news isn't all bad, thanks to a new environmental initiative.

Like a growing number of coastal cities, the Egyptian resort of Hurghada this year decided to fight back against the mountains of plastic trash polluting the world's oceans.

Environmentalists had long campaigned against the blight of polymer refuse floating on waves, washing up on beaches and harming coral reefs and marine wildlife.

Divers recently rescued a shark by removing a plastic ring from around its neck, says local campaign group the Hurghada Environmental Protection and Conservation Association (HEPCA).

So in June the popular tourist resort and other cities of Egypt's Red Sea province prohibited single-use plastic products, enforcing the ban with stiff fines.

Since then, disposable plastic shopping bags and throw-away utensils have been largely replaced with alternative products made from paper, other organic materials and biodegradable plastic.

"Single-use plastics are no longer to be seen in the city," said Ahmed al-Gharib, manager of a luxury hotel in central Hurghada.

HEPCA says that while the problem hasn't disappeared, a big difference can be seen at the city's waste sorting plant.

The amount of plastic waste received there fell to 141 tons in November, down from 230 tons during the same month a year earlier.

The world currently produces more than 300 million tonnes of plastic annually. Scientists estimate there are at least five trillion pieces of the stuff floating in our oceans.

The United Nations says only nine percent of plastic ever produced has been recycled.

It is a global problem that requires many local solutions, including in Egypt where many tourists no longer accept single-use plastic and welcome the change.

Egypt's Red Sea province depends heavily on income from tourists, many of whom come to snorkel and scuba dive among its spectacular reefs -- delicate ecosystems particularly threatened by both global warming and plastic pollution.

Since the ban, the group and authorities have distributed tens of thousands of reusable bags to residents and businesses, to deter the use of single-use plastic bags.

Fast-food chains and grocery stores have switched to wood-based or paper packaging.

And most hotels in and around Hurghada have given up disposable plastic cups and utensils.

"We now use either acrylic or wooden cups and utensils" designed to be reused or to break down naturally, Gharib told AFP.

Mohamed Musa, director of another resort's food and beverage department, said that plastic waste resulting from a single hotel meal-time had been cut from up to two tonnes to about 750 kilogrammes.

"The entire city has become cleaner than before," he said.