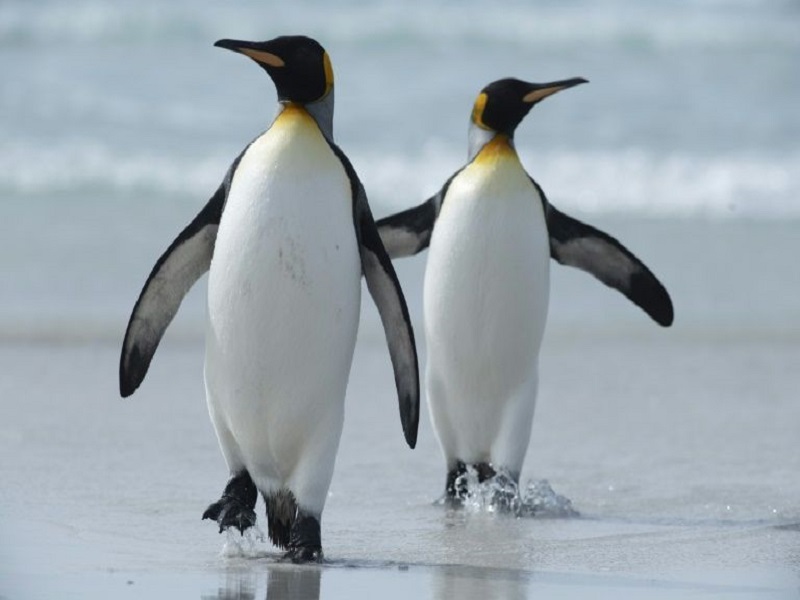 Stanley (Falkland Islands) (AFP) - Waddling up the beach in single file, their heads held high with an almost self-important demeanor, king penguins are a major draw in the Falkland Islands' tourism industry.

Their fluffy brown chicks are nearly fearless of humans, meaning tourists at Volunteer Point, a peninsula on East Falkland Island, might get almost close enough to touch one.

"We're the furthest location north in the world that you can see king penguins," said Tony Heathman, a former sheep farmer who has spent the last 16 years taking tour groups to Volunteer Point, where a thousand pairs of the islands' signature species go to breed.

"We get lots and lots of people who... love to come here and get as close to the king penguins as they possibly can," the 70-year-old told AFP.

Kings are just one of five penguin species in the Falklands, alongside the wacky-looking rockhoppers which have yellow tassels sprouting from the side of their heads, gentoos, macaronis and the burrowing magellanics.

The Falklands have incredibly rich biodiversity, including more than 25 species of whales and dolphins, but it is the guaranteed ability to get up close with penguins that makes it a particularly enticing destination.

Tourism is a growing industry in the Falklands despite their remote location in the South Atlantic some 480 kilometers (300 miles) off Argentina and occasional political and economic hostility from Buenos Aires.

"One of the key attractions for us was the king penguins at Volunteer Point, so we saw plenty of those," said Flavia Tang, 29, from London, who came for a week with her partner.

Volunteer Point is one of the islands' most popular destinations, accessible from the capital Stanley by a three-hour ride in a four-wheel drive vehicle, including 11 miles of bumpy, boggy, off-road track.

The peninsula is also home to gentoos and magellanic penguins -- known locally as jackasses because of their braying-like call -- as well as oystercatchers, South American terns and ruddy-headed geese.

Another of the Falklands' stunning locations for wildlife watching is Kidney Island, where rockhoppers use their claws and beaks to help them get to the top of cliffs where they will mate.

In order to see the birds, visitors must trek a half hour through tall, three-meter (10-foot) tussac grass while avoiding ground bird nests.

But a bird called the sooty shearwater is what makes the island truly unique.

"Kidney Island is home to 140,000 breeding pairs of sooty shearwaters that are just rafting off the coast here ready to come in," Denise Blake, the Falklands government's environmental officer, told AFP during a visit to the outlying island.

"So as night falls you really see them swooping in over the heads a bit like the Hitchcock movie where all the birds start circling in: It's incredible for that."

While many nature-lovers head to places such as Antarctica and South Georgia, an island in the South Atlantic, Sally Ellis, the manager at International Tours and Travel, feels the Falklands are a better option.

"Antarctica and South Georgia are nothing compared to the variety and accessibility of wildlife in the Falkland Islands and it costs about a quarter," she said, adding that there was nearly a "guarantee" to see whatever wildlife is desired.

Beyond birds the endangered sei whale is found off the coast of the Falklands while the distinctive black and white Commerson's dolphins swim near Yorke Bay and Gypsy Cove.

In addition to nature watching, adventure tourism is also growing on the islands, where enterprising locals are branching into the industry.

The married couple is hoping to attract some of the 60,000 people a year who arrive in the Falklands from cruise ships by offering the chance to explore the islands from their four-seater Robinson R-44 helicopter.

"It's been a very busy and exciting time for us," said Tom Chater, 43.

"It's something we thought about for a long time," added 46-year-old Jane. "It's a leap of faith but we're keen to see how it works out."