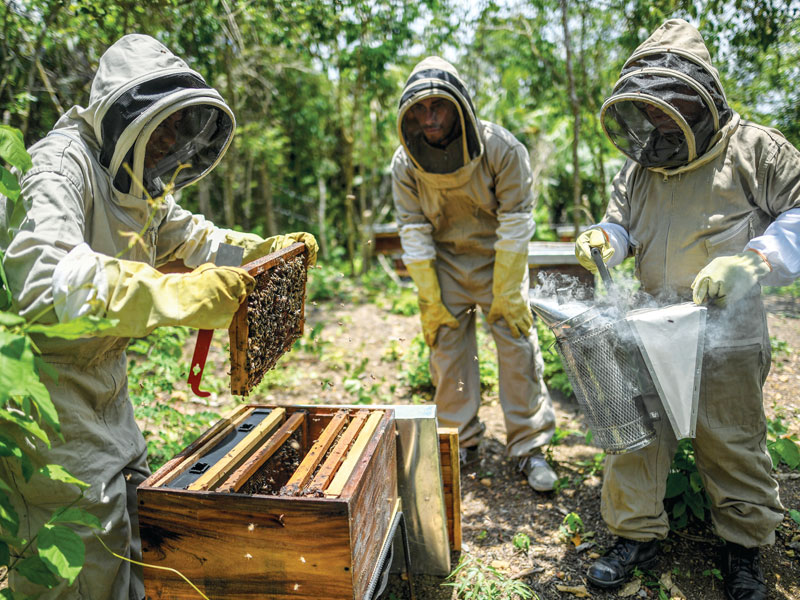 Nearly two decades after one of the Colombian conflict’s most brutal atrocities, life has slowly returned to a dusty village in part because of the lure of bees

Covered from head to toe in a protective suit, Yina Ortiz peers through a veil to check in on her beehive.

It is one of hundreds that form a lifeline for her remote village, helping to heal the wounds of one of the Colombian conflict's most brutal atrocities.

Rightwing paramilitaries stormed the village in the dead of night and used machetes to hack 27 people to death, accusing them of collaborating with leftist guerrillas.

The attack 18 years ago was one of the conflict's worst atrocities.

Yina, a young girl then, survived the attack on her village of Chengue in the northern Montes de Maria region. But she lost several members of her family as well as close friends.

Now 33, her memories are still clear, particularly of "the dead lying in the streets the next day."

"It wasn't just the streams of blood, it was awful to see so many dead bodies, one on top of the other, there on the ground, and their loved ones picking them up," Yina told AFP.

More than a hundred families fled in the wake of the atrocity, leaving behind a ghost village.

But nearly two decades later, life has slowly returned to the dusty village, in part because of the lure of bees. A programme initiated by Yina and a group of industrious local women helped bring apiculture to Chengue and it hasn't looked back.

"Thanks to beekeeping, people have united, returned, they enjoy taking care of the bees," she said, working the handle on a device called a bee smoker to fumigate and calm the swarming bees.

For the past year, the 159 families of Chengue alternate between agricultural work and caring for the 500 hives donated by the government and the United Nations, as part of a collective programme for survivors of armed conflict.

"We used to be all over the place, some people were in Ovejas, others in Sincelejo, but we need to heal wounds and now, thanks to the beekeeping, people have come back, they like to be with the bees, to study the life of the bees."

For Yina, apiculture is a way of "trying to heal the wounds" left over from the war, but it also represents a hope of survival for farmers whose mixed crops of tobacco, yam and cassava are gradually drying up because of global warming.

Julia Merino, a 49 year old school teacher who manages the project, expects the first harvest at the end of the year to yield 13 tonnes of honey.

For Julia, it will be a sweet victory, a balm to salve the memories of the 2001 attack.

Her uncles and cousins were mutilated and killed by the right wing paramilitaries. Two years later, her husband was abducted and murdered by the leftist Revolutionary Armed Forces of Colombia (FARC) as local families were once again caught in the middle of Colombia's internecine conflict.

Julia is known here as "the last widow of Chengue" because she was the only one who returned to the village where she lost her husband. In front of his whitewashed grave, in the abandoned cemetery of nearby Ovejas commune, she recalled the healing process that has taken her to this point.

Workshops allowed her to "turn these sources of pain" into "spaces of goodness, to heal wounds and recover the social fabric that had fragmented," she said.

Julia says she shared her experience with other women, mounting the honey venture to spark "economic change" in the village.

Chengue has suffered more than most rural villages from Colombia's brutal conflict, and remains far from the reach of state institutions. Roads here are little more than sandy tracks. There is no running water, no gas, and regular periods of drought are striking with greater intensity.

Guillermo Marquez, 62, worries about the future amid his tobacco plants, once the economic engine of the region.

Farmers here have seen their earnings plummet since tobacco giant Philip Morris announced in June that it was closing its factories in Colombia, citing tax increases and smuggling.

"We are abandoned by both business and nature," said Marquez, adding that he now regrets having burned trees to plant corn as the land dries up.

After 50 years of tobacco growing, he is reluctant to venture into apiculture.

Pesticides used by some farmers pose a challenge to the nascent industry.

But the beekeepers of Chengue are determined to revive the village and brave what nature and climate change throws at them. They have little choice.

"I am in the process of returning to the land, to love and to earn my independence," said Julia, convinced that the women and their bees will yet become "the masters of the territory."