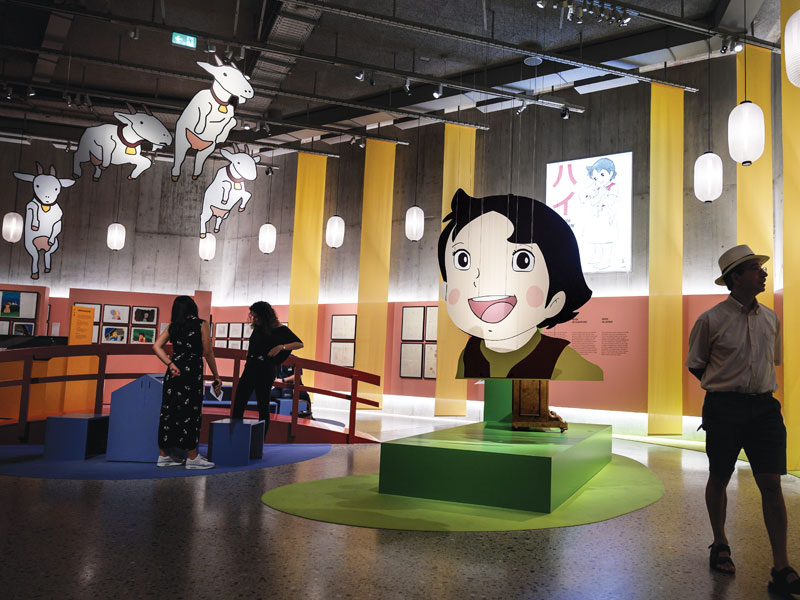 Heidi and Super Mario may not seem to have much in common but anime and video game aficionados will detect the signature style of Japanese character designer Yoichi Kotabe in both.

Far from the Swiss Alps, the cherished 19th-century storybook character Heidi has played an unlikely role in the creation of Japan's now booming anime industry. The story of the little orphan girl who goes to live with her gruff grandfather in the mountains took Japan by storm in the 1970s with the animation series Alps no Shojo Heidi (Heidi: A Girl of the Alps).

The 52 part TV show, which became a worldwide hit, marked a turning point in the careers of its creators, including Kotabe. He was subsequently recruited by video game pioneer Nintendo to redesign a host of characters in Mario.

Heidi also boosted the standing of director Isao Takahata, best known for the animated war film Grave of the Fireflies, and Hayao Miyazaki, creator of films Spirited Away and My Neighbor Totoro. The two joined forces to set up the celebrated anime Studio Ghibli.

Heidi's Japanese adventure is explored in an exhibition at the Swiss National Museum in Zurich, running until October 13.

Kotabe has been invited to take part in the event to explain the genesis of the character he first began sketching nearly four decades ago.

"The goal was to have a little girl who was 'kawaii', as cute as possible," he told AFP, describing how he had first drawn her with large eyes, a big smile, but also "little braids".

But he said that when he presented his first sketches, a specialist on the 1880 novel by Johanna Spyri pointed out that "Heidi is a five year old girl who lives in the mountains with her grandfather, who is not very friendly. He is not going to do her braids every morning."

Kotabe was prompted to rethink her image and gave Heidi the ruffled, short, dark locks that fans of the series saw from the first episode in 1974.

Although many adaptations of Heidi have been made for film and TV over the decades, Kotabe's version has thoroughly seeped into the public perception of the character.

And yet, the animated version of Heidi who would go on to be dubbed into 20 languages almost never came about.

Takahata had initially wanted to adapt the story of Pippi Longstocking to the screen. But Swedish author Astrid Lindgren turned down the offer, saying she feared the Japanese director was interested "only in money", Kotabe said.

So the director turned his attention to another classic of children's literature, and the team of Japanese animation artists headed to Switzerland to study Alpine cabins and pastures around the small eastern village of Maienfeld.

"This was entirely new for us," Kotabe said, pointing out that he had never been outside of Japan before.

"The time was very short, so we were aware that we had to gather as much material as possible," he said, describing how the team had spent a month furiously sketching their surroundings.

Takahata, who died last year at the age of 82, was known for the realism of his animations and attention to detail in depicting ordinary life and nature.

"People see (Heidi) as children's entertainment," Hans Thomsen, an art history professor at Zurich University and curator of the exhibit, told AFP. But the series is in fact "a piece of art", he insisted, pointing to its "creativity, visual impact and ability to move people".

The exhibition consists of a large number of animation panels, aquarelles and sketches of baby goats observed by the artists during their Alpine excursion.

Objects hinting at the series' success in Japan are also on display, including Heidi-adorned bento boxes, origami kits and packs of fondue cheese.

"The images of Heidi and her adventures in the mountains have had a strong impact on the Japanese, both young and old," Veronique Kanel, of Swiss Tourism, told AFP. But she added that the series had also allowed "this image of Switzerland as a paradise of Alpine nature" to be spread around the world, drawing huge numbers of tourists to Heidi's remote valley.

Kotabe recalled how surprised he had been in the 1970s to see "no visible traces of Heidi" in Maienfeld. The TV series he helped create has changed that, with its success reflected in a dedicated Heidi museum, special hiking trail and souvenir shops.

"Today, everything in Maienfeld has to do with Heidi," Kotabe said.