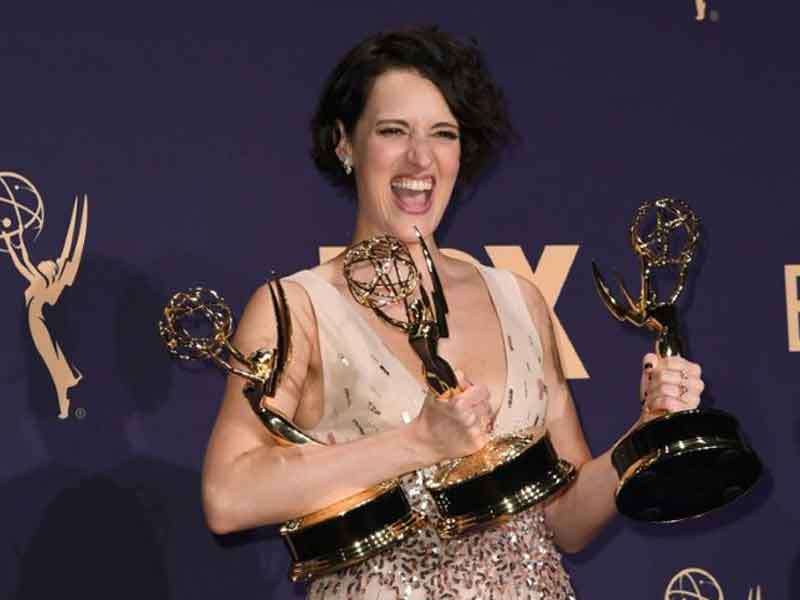 New York (AFP) - British actress and writer Phoebe Waller-Bridge was the explosive big winner at the Emmys on Sunday, as her offbeat and piercing creation "Fleabag" dominated the comedy awards at television's answer to the Oscars.

The TV adaptation of her one-woman show about a disillusioned young singleton in London won best comedy series, while Waller-Bridge herself won best comedy actress and comedy writing statuettes.

She defied predictions by besting eight-time acting winner Julia Louis-Dreyfus, who had won best actress for all six previous seasons of "Veep."

"'Fleabag' started as a one-woman show in Edinburgh festival," said Waller-Bridge as she collected the top comedy prize at the gala in Los Angeles. "The journey has been absolutely mental."

"It's just really wonderful to know and reassuring that a dirty, pervy, angry, messed-up woman can make it to the Emmys," she added, referring to her character.

With further directing, casting and editing Emmy wins, it was a remarkable turnaround for "Fleabag," which received zero nominations for its first season.

It caps a phenomenal rise for Waller-Bridge, 34, who also wrote the first season of award-winning spy thriller "Killing Eve," which she continues to executive produce, and has been called in to polish up the new James Bond script.

The British actress and screenwriter is hard to miss, standing tall -- literally, at five feet 10 inches (1.77m) -- in the television landscape, with her brown bob, ready laugh and elegant nose as sharp as her wit.

That wit is on full display in "Fleabag."

The show plays with convention by having the protagonist break the proverbial fourth wall and talk directly to viewers in her deep, staccato voice.

In the BBC series, which was picked up internationally by Amazon and rapidly gained popularity across the Atlantic, Waller-Bridge serves up a cocktail of unfiltered humanity, along with dark, irreverent humor and sex -- none of it gratuitous.

"My original inspiration was to say the things that I feel like women normally only say in the shadows," she said in a March interview with the website Broadway World, ahead of a run of sold-out performances of the "Fleabag" play in New York.

"We sort of pretend that we're innocent and adorable and like these perfect little creatures," she said, "but actually we have many, many other layers."

Titular character Fleabag, a young woman battling against the rules -- and with herself -- has a screw (or several) loose, and can veer towards the self-destructive, but never becomes a caricature.

Instead, the character is a very British blend of impeccable manners and a keen sense of derision, just like her creator.

Waller-Bridge is "not apologetic about having a flawed heroine," Andrew Scott, one of the main characters in Season 2, told AFP in an interview earlier this year.

All that has been enough for Waller-Bridge to be hailed as a feminist heroine, regularly compared to American screenwriter Lena Dunham, though their universes are fairly far apart.

"Because it's written by a female, people point out that it's a feminist show, but I think sometimes that just undermines the actual work," said Scott. "I think her grace and gift is her understanding of humanity."

But the feminist theme is reinforced by Waller-Bridge's propensity to offer fellow actresses equally dense, complex roles -- in "Fleabag," Olivia Colman -- who won an Oscar for "The Favourite" -- delights as the heroine's passive-aggressive stepmother.

Waller-Bridge has been called upon to liven up the script for the 25th installment of James Bond's adventures, at the express request of 007 himself, actor Daniel Craig, who wanted to inject more humor into the film set for release next year.

As for "Fleabag," Waller-Bridge has ruled out a third season of the series -- at least for another 16 years.

Asked at a Los Angeles screening last month whether her upcoming reprisal of the original play in London's West End is the last we will see of "Fleabag," Waller-Bridge said the show had come "to a natural end."

"I think it's time to go to the next chapter, and I'm so grateful for the character," she said.