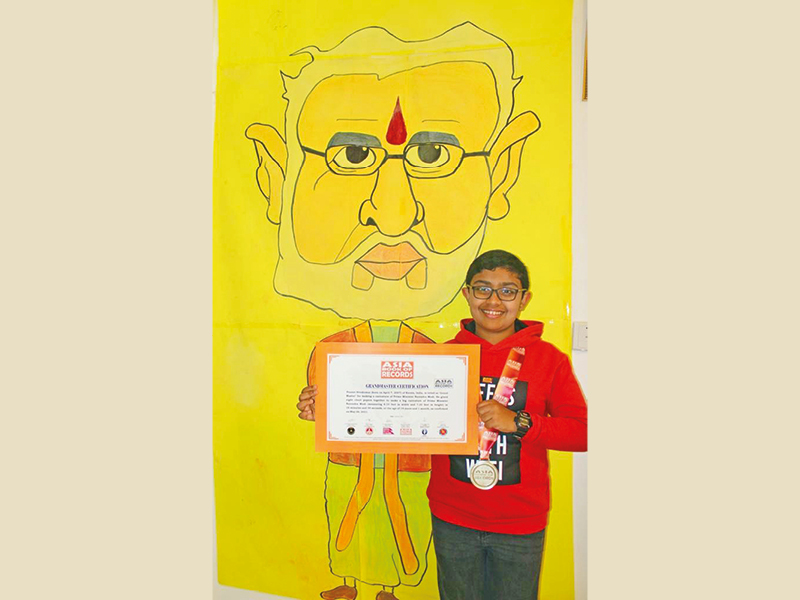 Pranav Sivakumar, a grade 9 student of Indian School Ghubra (ISG), has entered the Asia Book of Records which has awarded him a 'Grandmaster certification' for drawing one of the largest caricatures of Indian Prime Minister Narendra Modi.

The 2.1m x1.2m caricature was created by 14 year old Pranav by joining together eight standard chart papers. The record is the biggest caricature ever drawn in a limited timeframe.

“Sketching is my passion from my childhood. I am interested in caricatures, portraits and 3D car designing. It was a great pleasure and a challenge in sketching the biggest caricature of Prime Minister Narendra Modi in 16 minutes flat,” Pranav said, adding, “I would like to show PM Modi, and the world, what I have done for him as a mark of admiration and respect. I have drawn many caricatures but this one is special as it was a challenge to do it within 16 minutes to set a a record. I hope Modiji would see it some day.”

Keen on drawing from a vey early age, Pranav has also sketched his favourite cartoon characters like Tom, Sher Khan and Spiderman along with his collection of sports personalities which include legendary cricketers like Sachin Tendulkar and Virat Kohli, and football icons like Lionel Messi.

Under the guidance of his mother, Rema, who is an artist and art teacher, Pranav has been exploring newer sides to his talent and has showcased his drawings through various exhibitions in Muscat and India. He has also bagged several prizes in various national and international competitions and harbours an ambition of becoming a creative car designer in the near future.