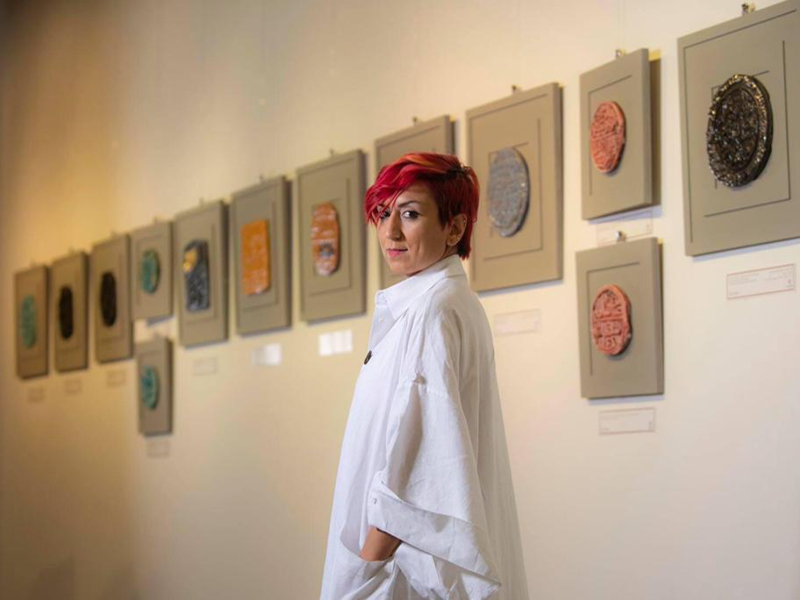 If you want to walk down memory lane and come face to face with ancient legal tender, a symbol of commerce and civilisation of a bygone era in Oman, walk in to the Art & Soul Gallery at Water Front mall, in Qurm, where a unique exhibition is currently on.

The exhibition, titled Earthly Treasure, comprises a beautiful display of artworks in ceramic, depicting ancient coins, made by Shima Amia, an Iranian artist in Oman, who has fulfilled one of her many desires through this collection.

Amia’s ‘glazed pottery exhibition’ is inspired by the themes deeply rooted in the history and culture of Oman. With her ingenuity and innovation as an Iranian artist, Amia displays ancient coins through pottery techniques which is known as one of the oldest applied arts in the world.

“It seems as if one stands right in front of the ancient wealth made of thousands of metal coins as discovered in the excavations. However, in fact, this valuable natural treasure is just a dream recreated with clay! The clay which comes from nature and has always been a fertile ground for diverse cultures and civilisations to flourish and develop,” she asserts.

In addition, by displaying a section of masks adapted from the native culture of Oman, besides a collection of clay coins, Amia goes beyond the civilisation theme. She broadens her lens to further focus on cultural interaction and ethnic similarities to investigate these concepts. By using Iranian, Arabic, and Omani designs and Islamic motifs in making coins, Amia has made an attempt to recognise and appreciate the deep intercultural bonds that have existed in this region since thousands of years.

“These ties are based on a combination of human relationships and mutual cultural, artistic, industrial and economic interests. In fact, this is the miracle of art which provides us with an opportunity to honour the cultural heritage of our forefathers and to hope that the ancestral cultural preservation and protection will be continued for generations,” she says.

Amia told Muscat Daily, “I've been working on this project since 2018 as I have always been fascinated by coins. One day, I had visited the National Museum of Oman which has a section to display ancient coins. On viewing the beautiful coins, it occurred to me that this can turn out into a wonderful project to showcase to people how these tiny coins once had immense value and were cultural symbols of another age.”

Later, she visited a similar museum in the Central Bank of Oman, which also has a collection of old coins, and was convinced that she could create artworks that represent the old coins. Her collection was the result of painstaking effort over the past two years and it has been fashioned purely to educate people and make them acquainted with cultural nuances of the past in Oman wherein old coins were an integral part of commerce and civilisation, she explained.

Pouring her soul into clay

A full-time ceramist and successful art teacher, Shima Amia was born and brought up in Tehran, Iran, and secured a Bachelor’s degree in Fine Arts from Soureh University in Tehran.

She has been living in Muscat since 2013 and has conducted workshops in different Omani and international schools as well as in Sultan Qaboos University. In 2016, she established her own art studio in Muscat where she has also been teaching art lovers of all ages.

Passionate about ceramic art and pottery, as she finds these very close to nature, Amia communicates and expresses herself by pouring her soul into clay and kneading and shaping it until a dream comes true. “Earth or clay, one of the four natural elements, is a basic material, and therefore, should be glorified,” says Amia who simply loves the fulfilling synergy between her emotions, her hands and clay, which together create magic.