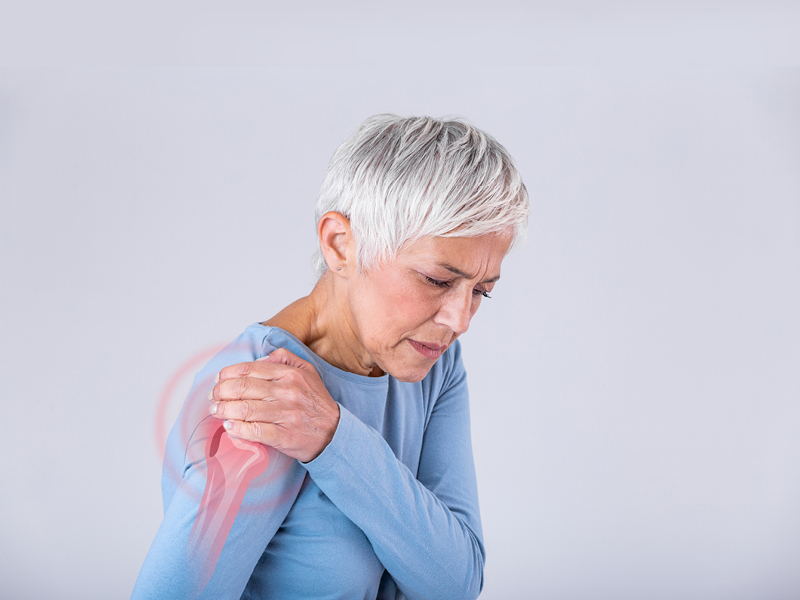 Adhesive capsulitis, popularly known as frozen shoulder, is quite discomforting to deal with as it can turn simple actions like combing hair or wearing garments into self-limiting Herculean tasks.

“Climate does not per se lead to this condition but cold weather can worsen the pain. This is one of the main reasons for patients visiting clinics, seeking treatment for it, in winter,” says Dr Biswajit Dutta Baruah, consultant orthopaedic surgeon, KIMS Oman Hospital.

Sometimes following surgery or a prolonged period of no movement, often for no obvious reason, the capsule surrounding the ball and socket joint of the shoulder gets inflamed and  stiff, preventing movement around the shoulder. Left untreated, it can last up to 2 years, severely restricting routine tasks involving movement of the shoulder, Dr Biswajit pointed out.

“However, it was Simon-Emmanuel Duplay, a French surgeon, who was the first to write a comprehensive description of this condition in 1872. He referred to it as periarthritis, a term seldom used these days. A more appropriate, and widely accepted term in medical circles is adhesive capsulitis, Dr Biswajit said.

He further explained, for the purpose of this article let's stick to the term frozen shoulder for its simplicity in referring to this, at times disabling condition. It affects about 3-5% of the population peaking between 40-65 years. It is more common in females, and in 20-30% cases, it affects both the shoulders.

Unfortunately, we do not know the exact reason for this condition. Often, it occurs commonly in diabetics - nearly a third of them have this condition. It is also known to occur more often in those with previous shoulder or breast surgeries, thyroid disorders, afflictions of the heart, and Parkinson's disease.

Previous injury and prolonged immobilisation of the shoulder can also lead to a frozen shoulder. In this context, discarding arm slings for elderly patients at the earliest is critical.

What we know today is that, in this condition, the capsule which surrounds the joint gets thickened, tight and contracted. This often leads to severe stiffness or restriction in movements. The condition develops over a period of time in stages.

In the first stage, the freezing stage, lasting 3-9 months, there is progressive painful restriction in movement of the affected shoulder. In the second stage, the frozen stage, lasting from 4-20 months, pain improves but stiffness persists or worsens affecting the person's ability to perform daily activities. The third stage, the thawing stage, lasting 5-24 months, is characterised by marked but gradual restoration of movement in the shoulder joint.

The stages are not distinct but often overlap. In the first two stages, in addition to pain, most patients are unable to raise their arms forwards or sideways. They are not able to reach the back of their heads or upper backs. Often women find it difficult to tie up their hair or men find it difficult to clean their upper backs. They also have trouble reaching out to upper tiers of bookshelves or kitchen shelves. Putting on pull over clothes like vests or sweaters can be difficult for the elderly. And for those, living by themselves, such limitations in shoulder movement can severely impact their day to day activities.

A family physician or an internist is often the first to detect the condition and will usually refer the patient to an orthopaedic surgeon or physiotherapist for treatment. Diagnosis of this condition is usually made by clinical examination. X-rays and scans of the shoulder are not necessary to make the diagnosis. MRI scans may be helpful to rule out other afflictions or to assess the degree of capsular involvement at later stages of treatment.

Initial treatment is guided towards relieving pain and halting the progression of tightness in the capsule. So the physician or surgeon will prescribe anti-inflammatory drugs or other analgesics. A visit to the physio is necessary to maintain the range of movement and gradually reverse the restriction. This may need several sessions of therapy and often demands patience from the patient and the treating physician.

Once the pain is considerably under control, in addition to the therapy, it is essential that the patient continues exercises at home, like wall climbing, spider exercises, and exercises using a rope or towel. If there is sufficient relief of pain and gradual recovery in movement, this will suffice.

Patients who do not benefit from drugs may benefit from cortisone injections into the shoulder joint. This is often done by orthopaedic surgeons in out-patient clinics. Resolution of pain is followed by physical therapy for reversal of stiffness.

For many patients, in spite of all this, there is relentless progression in limitation of shoulder movement. In such situations, further intervention may become necessary. Manipulation under anaesthesia is one such option wherein the shoulder joint is gently, but forcibly, moved in all directions, breaking up the adhesions between the capsule and other internal structures of the shoulder joint. This short procedure is often done under general anaesthesia and lasts a few minutes.

Arthroscopic (keyhole surgery) is another option available for releasing the tight capsule. Often, these procedures are combined with cortisone shots, and are followed by intense physical therapy.

Many arthroscopic surgeons have also tried dilatation of the joint with saline fluids but results are often not consistent. Open surgery is not resorted to for this condition, in general, as it is associated with delayed recovery.

In certain situations, like post stroke or post head injury, where there is severe stiffness of the joint to such an extent that arthroscopy cannot be performed, open surgery may be beneficial.

To summarise, Dr Biswajit says, “Frozen shoulder is a common and disabling condition affecting the general population. Management of this condition can be quite trying for patients, physicians, and therapists. But with patience and due diligence, the condition can be treated by employing varied methods. Most patients make an excellent recovery with non-surgical methods of treatment as well as physiotherapy.”