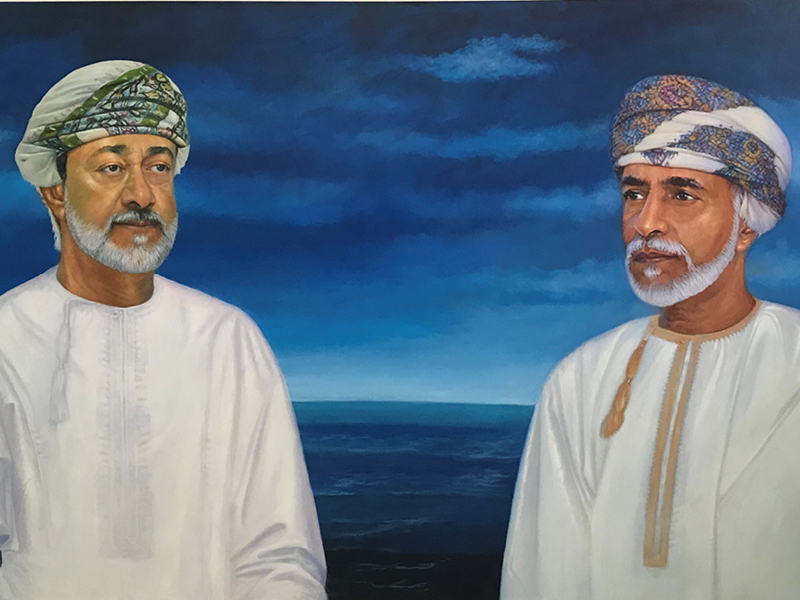 Filled with awe for the towering personality of HM, Late Sultan Qaboos bin Said, Sheffy Tattarath, an Indian artist in Oman, has been creating several portraits of His Majesty over the past few decades. And now, his creativity has taken a bigger leap in creating portraits of HM Sultan Haitham bin Tarik who completes one year tomorrow (January 11) since he took over the reins of the country as the new ruler of Oman in January 2020.

“Choose a job you love and you'll never have to work a day in your life – Confucius once said. I am literally 'living' with this quote deep rooted within me, because whatever I paint for a living, by all means, I am living for painting as well. When it comes to portraits, there are no exceptions, I do all of them for a living, but I do them with love and passion, especially the portraits of Late HM Sultan Qaboos and the current ruler of Oman, HM Sultan Haitham bin Tarik,” says Sheffi.

The artist, who works as art director for Golden Brush Consultancy, is well known in Oman, especially because of his special talent for portraits. He asserts, that it is difficult to personally procure pictures of the ruler of Oman, hence, he relies on other sources through his clients as he does not want to use any photographer's work.

“I would always like to change the picture in my own way but within an acceptable limits. For example, often I give extra light and colours/strokes and sometimes, I change the background or standing postures could be converted into sitting, etc. The amount of time I spend on each portrait is unpredictable because it depends upon the style of the work,” he explains, adding, “No matter how long you spend on a painting , if it could make others smile then, that it is worth it. And for royal portraits of His Majesty, the Sultan, it has to be perfect in every way to be really appreciated by anybody.”

About Oman as an inspiration for artists, Sheffi says, “To me, the most attractive part of Oman, as a whole, is it's mid saturated colours and the mixtures of orange and burnt sienna hues - it reflects the calmness of Omani people's minds. Even if they wear bright colour clothes, it blends so smoothly with the pastel shades of nature. One can't see it separately, as Oman's nature and its cultural traditions blend with each other - like an artist's colour palette. The old world charm is, indeed, changing, but the change is happening at a very slow pace because, as a nation, the citizens continue to respect their rich traditions (such as Nizwa Souq goat festival, Samail chain market, and Salalah Khareef Festival, to name a few) and other cultural events they conduct every year.

“I have painted Late HM Sultan Qaboos' portraits around 14 times and it was a different experience each time. HM Haitham bin Tarik's portrait, however, was more challenging because I didn't get a proper photograph to paint. So, I had to literally adjust and create the posture. That was a challenging part as it had to be created on the same canvas adjacent to the Late HM, so as to appear in perfect sync with each other. Yet again, it was an unforgettable experience for me and very satisfying, as well,” he said.

About striving to get out the right expression of HM in every artwork, Sheffy says, “There are times when every artist faces these kind of difficulties, I guess. Artists are emotional and moody people. So I, too, faced such issues. But since I Iove painting portraits of HM, every stroke was delivered with patience and rectified, wherever needed, with joy.”

Sheffy says he has presented portraits of HM, Late Sultan Qaboos, at least four times, though not directly. They were procured from him by those who wanted to gift HM and it gave him great joy to learn that his paintings reached HM. He now looks forward for an opportunity to present a portrait of HM Sultan Haitham in the near future. “It would give me immense pleasure to do so,” he adds.