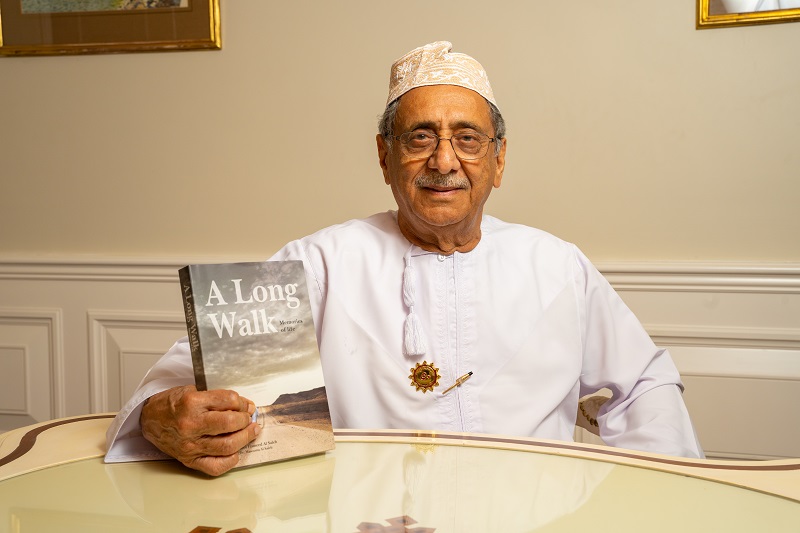 You wouldn’t detect any intensity in his gaze, neither any intent to scrutinise someone concealed within that unspoken word curled within his lips. But when Maqbool Hameed al Saleh, the doyen of Omani industry, meets someone, his intuitions and sixth sense come to play, to deliver cues that have rarely gone wrong over the past seven decades.

Armed with this unique ability and just one key asset to rely on – hard work – this young man had set out to realise his dreams in Oman at a time when the Blessed Renaissance had begun to take shape in the early 70s of the last century of the second millennium. And though providence saw him succeed in diverse fields of business over the past five decades, Maqbool al Saleh attributes every bit of success to every drop of sweat invested by him and his team, over the years, before he became chairman of the OHI Group.

Today, even as he revels in the fruits of his labour, the stark reality of his early life – a time when he chose to live with his paternal grandparents to ease the financial crunch that his father was reeling under, in a small house in Muttrah with many mouths to feed – remains etched on his memory as a driving force to succeed against all odds. And, to provide young Omanis formidable tips to survive and succeed in an unforgiving modern world, Saleh has compiled his own memoirs which provide glimpses of his illustrious life and insights into his passions and principles that have made him the successful business magnate that he is today.

A Long Walk – Memories of Life, which was released by H E Sayyid Badr bin Hamad bin Hamood al Busaidi, Foreign Minister, at Majlis Al Khonji, an online platform that brings together Oman’s leading business personalities, was written by Saleh himself, with help from his sister Dr Masooma al Saleh.

The book was written over a period of three years and it contains, incidents, locations and personal memories of various events as accurately as he could remember. “There are many recollections of events that may be chronologically confusing for the reader at times, however, the floods of memories swarm as I begin to recall the details of my life,” he states in his initial note.

Explaining the title of the book, Saleh said it was the title that occurred to him first, and apart from being synonymous with his reflective journey, it was also reminiscent of his early life when he had to walk long distances from Muttrah to Ruwi for his job in the army. “As I write about my journey, from childhood to now, it feels as if I have walked a long path. I know, when my road eventually ends, as all roads do, I would not want my story and my memories to end with me,” he states.

Saleh’s memoirs begin with his birth, with an interesting description of how his pregnant mother was ferried in an old pickup van from Nazi Moja, his first home in Muttrah which means ‘one coconut’ in Swahili, to the American Mission Hospital. From tracing his family roots, life in Muttrah, his childhood homes/amusements, school days, his early days in the army as a teenager, and his marriage, it then moves to the nitty-gritties of his career, professional challenges and the decision to club all his business activities under one umbrella by forming OHI in the early 70s.

It also has chapters on his love for travel and his passion for boats (though it was in defiance of his mother’s instructions to stay away from boats) and how a deal to purchase a boat from an Indian business tycoon  had run into rough weather. The final chapter on Adventures and Misadventures gives an account of some of Saleh’s exceptional encounters which shaped his personality as well as outlook.

The chapters are interspersed with a select set of personal and professional photographs which indicate not just his humble beginning but also diverse shades of his acquired affluence. It ends with an epilogue wherein Saleh owes allegiance to his mentor – the Late HM Sultan Qaboos bin Said – who, he says, taught him three foremost skills that became the foundation of his success – discipline, authority and far-sightedness.

“I was skeptical myself about writing this book, though the idea about writing it came when I was serving in the Ministry of Social Affairs, through my advisor who was a university professor in Beirut. He encouraged me and sent one of his bright students to shadow me for three months to jot down various aspects of my life. However, that did not materialise as the young man unexpectedly left on leave and never returned,” Saleh disclosed in a free-wheeling chat, adding that he finally took it up himself as a challenge and dared to be very frank about many aspects of his life.

Admitting that entrepreneurship was something built within himself, Saleh disclosed that he started out by venturing to open a small canteen, during his army days, in one corner of the camp, and later took many more risks that ultimately paid rich dividends in the form of successful business ventures.

Recalling early beginnings, he said the generosity of the government in encouraging Omanis settled elsewhere to come back to Oman and join in the process of nation building in the 70s is what sparked the spirit of enterprise and self-dependency in many young men like him. That spirit has somewhat eroded over the decades and you don’t find it in the younger generation now, he said.

Disclosing that he made his own sons go out and seek jobs to develop their own industriousness, before getting a role in the family-owned business, Saleh stressed that there is no substitute for hard work and that people who rely on fate and miracles never get anywhere in life. “I don’t believe in miracles, I believe only in hard work,” he asserted.

As a clear cut message to young, budding businessmen who have a dream but no capital to begin with, Saleh has a simple message – “First, don’t replicate (study the market); secondly, never fall in love with your assets; and thirdly, work hard, don’t day dream.”

The beauty of Saleh’s memoirs is that they serve as a complete motivating guide for young Omanis, providing a blueprint for success based on reality which they can identify with. One may read it in one go or take up different chapters in any order and still find a cord of relevance running through each of them with lessons and inspiration cleverly concealed within the light-hearted tone of the narrative.

Here are some unique aspects of Maqbool al Saleh's personality, some of which find mention in his memoirs:

I only believe in – Hard work.

I began working – By selling newspapers.

My first home – Was in Muttrah, called 'Nazi Moja, which means 'one coconut' in Swahili.

My first job – I joined the army as a teenager to support my family.

My first entrepreneurial venture – A canteen in one corner of my camp in the army.

My conviction – If you cannot take up challenges, you cannot meet success.

My sporting past – I was a national level hockey player.

My honeymoon – Was spent in the most beautiful place on earth - Kashmir (India).

Food I love – Indian. It is similar to Omani food, only spicier.

My love for art – I have paintings, sculptures and exclusive artefacts from around the world put up in my home.

Favourite room in my villa – The TV room, where the family sits together to watch programmes.

My main door – Has a wicket gate; you have to bow as your enter (a sign of leaving your ego outside).

Favourite colour – Black. It is a strong colour.

My fitness regime – I swim every day. I love walks.

My passion – Boats. Out at sea, its a different world altogether.

I always rely on – My intuitions. They never go wrong.

I never forget – My roots; the struggles of my early life made me what I am today.